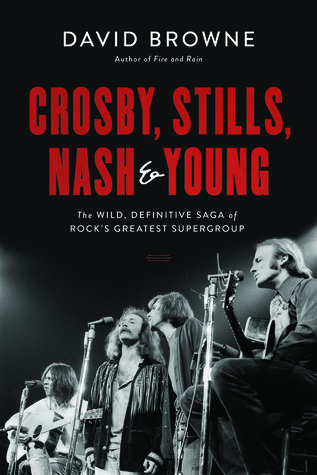 ABOUT THE BOOK:
Even in the larger-than-life world of rock and roll, it was hard to imagine four more different men. David Crosby, the opinionated hippie guru. Stephen Stills, the perpetually driven musician. Graham Nash, the tactful pop craftsman. Neil Young, the creatively restless loner. But together, few groups were as in sync with their times as Crosby, Stills, Nash and Young. Starting with the original trio's landmark 1969 debut album, the group embodied much about its era: communal , protest songs that took on the establishment and Richard Nixon, and liberal attitudes toward partners and lifestyles. Their group or individual songs--"Wooden Ships," "Suite: Judy Blue Eyes," "After the Gold Rush," "For What It's Worth" (with Stills and Young's Buffalo Springfield), "Love the One With," "Long Time Gone," "Just a Song Before I Go," "Southern Cross"--became the soundtrack of a generation. But their story would rarely be as harmonious as their legendary and influential vocal blend. In the years that followed, these four volatile men would continually break up, reunite, and disband again--all against a backdrop of social and musical change, recurring disagreements and jealousies, and self-destructive tendencies that threatened to cripple them both as a group and as individuals., Nash and Young: The Wild, Definitive Saga of Rock's Greatest Supergroup, longtime music journalist and Rolling David Browne presents the ultimate deep dive into rock and roll's most musical and turbulent brotherhood on the occasion of its 50th anniversary. Featuring exclusive interviews with David Crosby and Graham band members, colleagues, fellow superstars, former managers, employees, and lovers-and with access to unreleased music and documents--Browne takes readers backstage and onstage, into the musicians' homes, recording studios, and psyches, to chronicle the creative and psychological ties that have bound these men together--and sometimes torn them apart. This is the sweeping story of rock's longest-running, most dysfunctional, yet pre-eminent musical family, delivered with the epic feel their story rightly deserves.

Crosby, Stills, Nash and Young: The Wild, Definitive Saga of Rock's Greatest Supergroup by David Browne
My rating: 4 of 5 stars

One of the first rock supergroups, Crosby, Stills, Nash and Young, have been around, on and off, for over fifty years. Again, that makes this group one of those that I have known nearly my whole life.

Their music has played in the background of my life and I while I am more than a casual fan, I can’t say I am a super fan, knowing everything about them, frontward and backwards. I did know enough to recognize, that despite the talent and their popularity, their best trick seems to be self-sabotage. 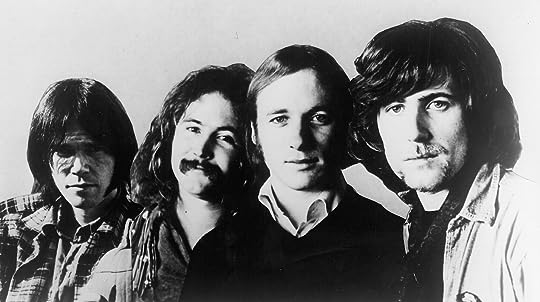 Despite the enormous ego clashes, the copious amounts of drugs, the health issues, and the constant second guessing about Neil Young’s ‘will he, or won’t he", the group always managed to sustain itself. Sometimes the effort was puny and sometimes it was simply brilliant, but the band has come together time and time again much to the delight of their loyal fans. 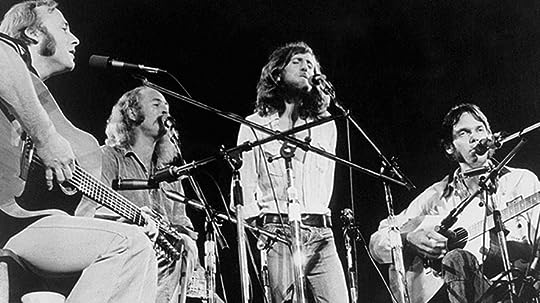 Theirs is one of the most turbulent and maladjusted groupings of musicians in rock history and their story is one that boggles the mind.

This a very, very comprehensive biography, and is well organized and obviously well researched. Browne has put a great deal of effort into the book, something I wish I found in other music biographies, many of which are hastily thrown together, using materials one can easily find on the internet. From that standpoint, I think the author deserves kudos for doing the grunt work and giving the book a solid presentation.

However, his subjects are the ones who let him down in the end. As with the Graham Nash memoir, I found the first part of the book of great interest. However, by the time we reached, the late eighties, I was beginning to feel exhausted by all the drama.

The last several decades are just more of the same old, same old. They get together for a concert or collaboration and beg Neil to join. He mostly plays hard to get, claiming he doesn’t want to cope with all the psychodrama- but contributing to it as well. Sometimes he would relent and then bail on them. They get along for a while, then start fighting, then they would scatter to the winds again, working on solo projects or their other bands, until they needed another influx of cash. 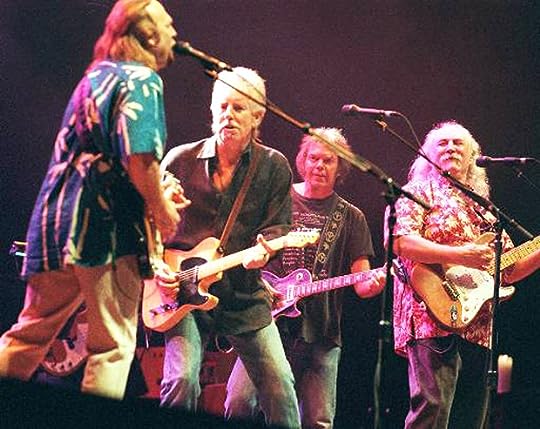 Therefore, the book fizzled out and got boring. I skim read the last two segments, if that tells you anything. Perhaps a summary of the 2000s would have been a better approach, although I do think the author meant well.

As for my personal feelings about the group- None of these guys are particularly likable. Some are more of a turn off than others. Unfortunately, their epic meltdowns and drug issues are also a part of their legacy.

However, I love their harmonies, their boldness in which they challenged the ‘establishment’ and their talent, separately and as a unit. I still listen to their music, rarely thinking about all the behind the scenes drama surrounding the group.

I do, however, think of all the group contributed to our musical experience. They’ve been a staple, and part of such an exciting time when so much creativity was emerging during the heyday of rock music, and what a big role they played in it.

They deserve a place in music history and their music, as nostalgic as it may seem now, meant something to people in a time when music mattered, when it made a statement, and was a voice for generations of people.

Overall, if you are a fan of this group, you have probably heard a lot of ground covered in this book before, but I still think there are plenty of details even the most knowledgeable fan might find interesting. If you are not familiar with the band’s back story, this book will tell you all ever wanted to know and then some.

Because it is obvious the author put in a lot of effort and work, I’m going to give this book a nudge up with the rating. The last few segments are redundant, but the author deserves an A for effort. 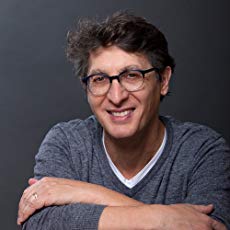 David Browne is a senior writer at Rolling Stone and a longtime music journalist. His work has appeared in the New York Times, Time, Spin, the New Republic, Men's Journal, the Huffington Post, Parade, and numerous other outlets. He was the music critic at the New York Daily News and then, for 16 years, the music critic at Entertainment Weekly, where he worked as a roadie for Kiss, shared a bagel with Leonard Cohen in Cohen's Montreal home, and spent time on the tour buses with Coldplay and the Black Crowes and with James Taylor at his Berkshires home. Rolling Stone he has written cover stories on Whitney Houston, Bob Dylan, Adele, Robin Williams and Philip Seymour Hoffman in addition to hundreds of articles and reviews. Browne is the author of six books: "Dream Brother" (2001), a dual biography of the late musicians Jeff and Tim Buckley; "Amped" (2004), a history of extreme sports; "Goodbye 20th Century" (2008), a biography of the pioneering indie band Sonic Youth; "Fire and Rain: The Beatles, Simon & Garfunkel, James Taylor, CSNY and the Lost Story of 1970" (2011), about the confluence of music and politics during that under-chronicled year; "The Spirit of '76" (2014), about the ground-breaking events of that year in America; and "So Many Roads: The Life and Times of the Grateful Dead" (2015), the first major biography of the band in over a dozen years. In 2019, Browne will publish two books: a major biography of Crosby, Stills, Nash & Young (Da Capo/Hachette, April 2, 2019) and a collection of the late Jeff Buckley's journals and writing, "His Own Voice" (Da Capo/Hachette, October 2019), which he compiled and co-edited with Buckley's mother, Mary Guibert. "Dream Brother," a steady seller for nearly 18 years, has been translated into French and Italian and is regularly cited as the definitive biography of Jeff Buckley, complete with access to friends, family, and archival material. "Goodbye 20th Century" was hailed as "an expressway to the soul of of the influential band" by Vanity Fair, "a rollicking, epic biography" by Salon, and "compulsively readable" by Publishers Weekly. It has also been published in the UK and Germany. "So Many Roads" has been hailed as "an education and revelation even for the seasoned Deadhead reader" (Steve Silberman, best-selling author of "NeuroTribes") and a book with "broader context and significance" (The Washington Post). Browne is the recipient of a Music Journalism Award for criticism. Born and raised in New Jersey, not far from Bruce Springsteen territory, he lives and works in New York City. He has a jones for sci-fi and horror films, non-fiction books, and those chocolate/coconut Girl Scout cookies, in no particular order.
Posted by gpangel at 1:00 AM