Where Snow Bleeds by Wendy Dranfield- Feature and Review 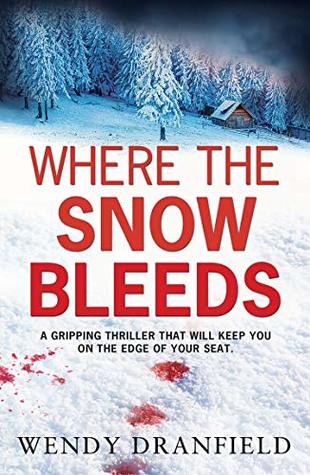 “You want to know what I’ve after living in Lone Creek all my life? I know the snow bleeds here”
Former police officer Dean Matheson has been playing it safe since the case that cost him almost everything. But working as a PI doesn’t quite cut it, that is until a British woman walks into his office with a job that Dean can’t resist.
The woman’s daughter, Hannah Walker, and her friend Jodie have gone working at a ski resort in Colorado. It’s clear there’s something sinister about the girls’ disappearance, but then why are the local police department being so unhelpful?
So begins Dean’s journey to Lone Creek on the trail of the missing girls – and he’ll soon find out that in Lone Creek, everyone has something to hide

Where the Snow Bleeds by Wendy Dranfield
My rating: 4 of 5 stars

Where Snow Bleeds by Wendy Dranfield is a 2019 Ruby Fiction publication.

Two girls working at a Colorado ski resort seemingly vanish into thin air. The local authorities aren’t too worried, claiming the girls probably just took off on their own accord. But, the mother of Hannah Walker refuses to accept that, especially since the girls left all their belongings behind. She decides to hire Dean Matheson to help her discover what really happened to her daughter.

Dean, now working in Las Vegas as a private detective, jumps at the chance to do something other than find missing pets. So, he heads to Lone Creek, Colorado, hoping to find the missing girls.

Upon arrival he meets Eva, a local police officer working the case, without the support of her superiors. After getting off to a rocky start, the pair will eventually join forces as more evidence points to foul play. Will they find the girls before it's too late?

It was a bit of a surprise to find Dean in the role of ‘pet detective’, initially, but his own dog, Rocky, is a terrific sidekick. One couldn’t blame Dean for hoping to catch a meatier assignment, but he got a bit more than he bargained for with this case. Eva’s attitude, however, was perhaps a bit over the top at first.

I knew she was grieving, mad, and generally out of sorts, with good reason. However, she was also very rude to Dean, a person she had only just met, for no reason. While I never doubted her sincerity, it took me a little while to warm up to her. But, as the case proceeds, Eva and Dean wind up becoming a fluid detective team, as the tension between them slowly thaws.

The case is more of a ‘race against time’ suspense drama than a whodunit, but there are several nice surprise twists I never saw coming. The suspense mounts which leads to a couple of riveting and epic showdowns that kept me glued to the pages. The baddies are super creepy, the plot line is unique, and the author did a solid job of weaving the threads together cohesively.

I strongly urge you to read the first book in the series before tackling this one. Most of the book works fine as a stand alone, but there are references to people and events which took place in the first installment. It looks as though the events that transpired in the first chapter may also segue into the third installment, so you will definitely want to know the full story beforehand. I for one can’t wait to see how all this will play out!! Wendy is a former Coroner's Assistant turned crime writer who lives in the UK with her husband.
Who Cares If They Die and Where the Snow Bleeds are the first two books in the Dean Matheson series, with more on the way. As well as her crime thriller series, Wendy has written a YA crime novel - The Girl Who Died - and she has several short stories published in and US anthologies. She has also been shortlisted and longlisted for various competitions, including the Mslexia Novel Competition.
For behind the scenes gossip and updates on her books (or photos of her cats), follow her on social media!
Website: https://wendydranfield.co.uk/
Twitter: @WendyDranfield
Facebook: https://www.facebook.com/WendyDranfield1/
YouTube: https://www.youtube.com/channel/UC
Posted by gpangel at 1:00 AM