Day of the Dead by Nicci French- Feature and Review Now the final book in this extraordinary series is here. And it's an ending you'll never forget.
A decade ago, psychologist Frieda Klein was sucked into the orbit of Dean Reeve -- a killer able to impersonate almost anyone, a man who can disappear without a trace, a psychopath obsessed with Frieda herself.
In the years since, Frieda has worked with -- and sometimes against -- the London police in solving their most baffling cases. But now she's in hiding, driven to isolation by Reeve. When a series of murders announces his return, Frieda must emerge from the shadows to confront her nemesis. And it's a might not survive.
This gripping cat-and-mouse thriller pits one of the most fascinating characters in contemporary fiction against an enemy like none other. Smart, sophisticated, and spellbinding, it's a novel to leave you breathless.

The Day of the Dead by Nicci French
My rating: 5 of 5 stars

The Day of the Dead by Nicci French is a 2018 William Morrow Paperbacks publication.

This is the last book in the Frieda Klein series, so I’ve been hoarding it, putting off what I was sure would be a sad goodbye. However, I have it on good authority that ‘Nicci French’ has a new book coming out soon, so I suppose it’s time to bid Freida and this awesome series farewell.

We’ve all been awaiting the final and ultimate showdown between Freida and her arch enemy Dean Reeve. The question is how many more people will Dean kill and will Freida be one of them?

As the story begins, Freida has extricated herself from her friends and family to keep them safe.

But, in a bizarre twist of fate, a young woman named Lola gets tossed into Freida’s path when it is suggested she write her dissertation on Freida, delving into her penchant for putting herself in dangerous situations. Unfortunately, Lola is now on Dean’s radar, and Freida must keep a close eye on her, lest she too becomes one of Dean’s victims.

Meanwhile, Dean is most assuredly escalating and Freida’s time is growing short. How, when and where Dean will choose their final face to face confrontation will keep readers on edge from beginning to end.

I could not have asked for a better end to such a stellar series. Tripping down memory lane a little, I recall my first impressions of Freida were a bit mixed. But, with each subsequent installment, I grew to like her more and more. This last installment is very, very atmospheric and intense. The conclusion did not let me down, after a build up that increased over seven previous installments- something I was a bit worried about.

That said, I will certainly miss Freida, and I am grateful to have made her acquaintance, as well as all the other recurring characters in the series.

If you haven’t read this series, I highly recommend it! Now that it has concluded, with only eight installments, it would be a good series, to ‘binge’ read. 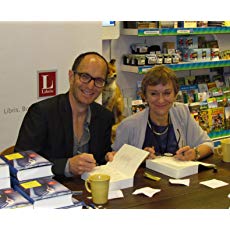