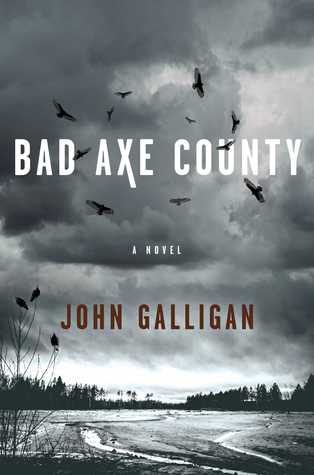 ABOUT THE BOOK:
Fifteen years ago, Heidi White’s parents were shot to death on their Bad County farm. The police declared it a murder-suicide and closed the case. But that night, Heidi found the one clue she knew could lead to the truth—if only the investigators would listen.
Now Heidi White is Heidi Kick, wife of local baseball legend Harley Kick and mother of three small children. She’s also the interim sheriff in Bad . Half the county wants Heidi the other half will do anything to keep her out of law enforcement. And as a deadly ice storm makes way to Bad , tensions rise and long-buried secrets climb to the surface.
As freezing rain washes out roads and rivers flood their banks, Heidi finds herself on the trail of a missing girl. Clues lead her down to backwoods stag parties, derelict dairy farms, and the local salvage yard—where the body of a different teenage girl has been carefully hidden for a decade.
As the storm rages on, Heidi realizes that someone is planting clues for her to find, leading her to some unpleasant truths that point to the local baseball team and a legendary game her husband pitched years ago. With a murder to solve, a missing girl to save, and a monster to bring to justice, Heidi is on the cusp of shaking her community to its core—and finding out what really happened the night her parents died.

Bad County: A Novel by John Galligan
My rating: 4 of 5 stars

Bad County by John Galligan is a 2019 Atria Books publication.

This is an ambitious mystery/ thriller which profiles the rural Wisconsin terrain as much as it does the characters, becoming an intricate part of the plot.

Heidi Kick was a small -town beauty queen when her life took a tragic turn. Her parents allegedly died as a result of a murder-suicide pact. Despite their financial downturn, which was believed to be the motive, Heidi never bought into that theory.

Now, after the local sheriff’s sudden demise, Heidi becomes interim sheriff. This doesn’t set well with the local good ole boys in the community at all. But Heidi is not totally without a support system, with one or two allies in the department helping her make logical decisions.

She does have to balance a marriage, and small children, along with her demanding, pressure -filled job. She’s holding her own, until an unexpected storm in the area triggers a series of events, revealing the dark, lurid underbelly of Bad County.

Suddenly, the inexperienced, but determined sheriff is neck deep in corruption, human trafficking, sleazy private parties hosting underage girls, and a strange burglary. The deeper she scratches beneath the surface, troubling implications hit a little too close to home. Dark forces are working against Heidi, thwarting her at every turn. While working around the clock to locate a missing girl, Heidi fervently hopes to finally discover the truth about her parents.

I won’t lie- what initially caused me to give this book a closer look was the atmospheric cover art. The premise sounded intriguing enough, with the promise of a strong female lead, so I decided to take a chance on it.

However, I also must admit, in all honesty, the story wasn't quite what I was expecting. Although Heidi refuses to accept the official cause of death in her parent’s case, her obsession with uncovering the truth runs more in the background. More in the forefront, is Heidi’s ‘race against the clock’ mission to locate a missing girl without making any critical missteps.

The story starts off on an odd, unexpected note, emphasizing the character's quirks, as they pertain to the rural setting. The banter is light and good-natured, but the atmosphere suddenly shifts turning super dark, edgy, and suspenseful, with a no holds barred tendency towards violence. I immediately sensed it was time to fasten my seatbelt and hold on for dear life.

Unfortunately, there are several threads running at once, along with a large cast of characters, which, as I’ve stated countless times, rarely works out for me. Sure enough, I struggled to keep everything straight. I had to slow my reading down to a crawl and do a little re-reading on a few occasions, to be sure I was keeping everything and everyone straight. I can’t say I was a big fan of the execution, or the uneven flow, but at the end of the day, despite its messiness, all the threads eventually come together, and the book ends on a high note. So, as they say, a win is still a win, even if it’s an ugly one.

The conclusion is gratifying, especially since Heidi Kick lives to fight another day. I liked Heidi’s character, as well as her sidekick, Denise. Those two made a great team. I wouldn’t mind stopping by Bad County again someday. I think this rural, deceptively bucolic area of Wisconsin still has many secrets, and the feisty Heidi Kick knows just how to unravel them.

John Galliganin addition to being a novelist and teacher, John has worked as a newspaper journalist, feature-film screenwriter, house painter, au pair, ESL teacher, , and freezer boy in a salmon cannery. He currently teaches writing at Madison Area Technical College, where his experience is enriched by students from every corner of the local and world community.
Posted by gpangel at 1:00 AM