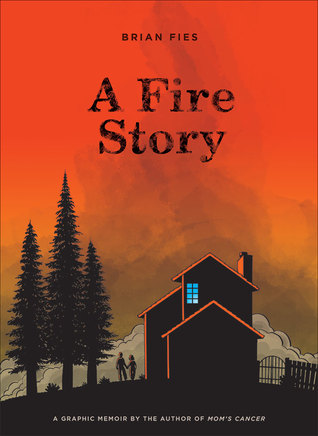 Early morning on Monday, October 9, 2017, wildfires burned through Northern California, resulting in 44 fatalities. In addition, 6,200 homes and 8,900 structures and were destroyed. Author Brian Fies’s firsthand account of this tragic event is an honest, unflinching depiction of his personal experiences, including losing his house and every possession he and his wife had that didn’t fit into the back of their car. In the days that followed, as the fires continued to burn through the area, Brian hastily pulled together A Fire Story and posted it online—it immediately went viral. He is now expanding his original to include environmental insight and the fire stories of his neighbors and others in his community. A Fire Story is an honest account of the wildfires that left homes destroyed, families broken, and a community determined to rebuild.

A Fire Story by Brian Fies
My rating: 4 of 5 stars

A Fire Story by Brian is a 2019 Harry N. Abrams publication.

This graphic novel depicts Brian Fies’ personal experiences when he lost his home during the 2017 Northern California wildfires.

His Webcomic and subsequent graphic novel has been a cathartic journey as he chronicles the various emotions he and his family felt, in the process of moving forward after such an incredibly difficult loss. He also adds others personal stories into the novel, adding even more poignancy to the devastation. The sense of community is also prevalent as people rose to the occasion to help their families, friends, and neighbors.

Brian’s sense of displacement, his broken- heartedness, and shock, leaps from the pages as does his temerity and the admission that while the process is slow and hard, and the days ahead were long and arduous, he and his family are determined to move forward and rebuild their lives.

My heart truly broke for Brian and the other families and people who shared their stories. Brian did a terrific job conveying his emotions and the way he and others around him dealt with the pain and what steps they had to take in order to move on with their lives.

From a personal standpoint, I have never experienced such a devastating loss. However, while in high school, two good friends of mine lost their homes to fire. It is so hard to comprehend, unless you experience something like that in an up close and personal way, how truly devastating it is to lose every single thing you own. It’s not just the obvious loss of things and stuff, it’s the sentimental loss, and the feeling of disassociation. Rebuilding, even if you have good insurance, even with the promise of a fresh start, just doesn’t offer all that much comfort when all you want to do is go home. 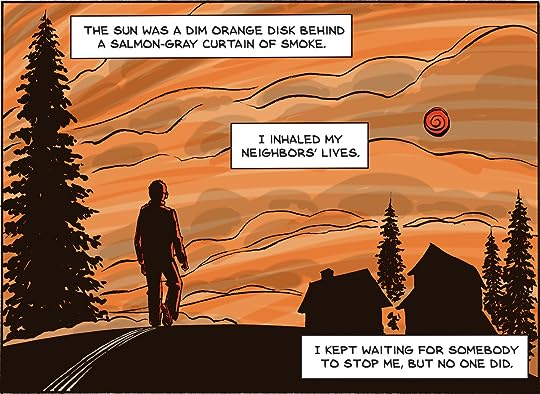 This is a very emotional and powerful story which started as a Webcomic, which is also included in this book. Because this is a graphic novel, and the visuals are of utmost importance within this format, I must admit I wasn’t bowled over by the artwork. The style may have been a statement, in part due to the gravity of the subject matter. The artwork is in black and white and maybe a little too simplistic, but again, but it does capture the essence of the situation, which is what counts at the end of the day. The timeline is also a bit choppy, but not hard to follow and is really a minor complaint. There are also real photos included driving home the reality of damage done by the raging fires.

I recommend this book to everyone, even if graphic novels aren't really your thing. Once the impact hits you, you will most likely feel compelled to count your blessings and will feel grateful for having a roof over your head, a toothbrush, a change of clothes, your personal papers, and a hundred other small things we all take for granted every day.

I was also inspired by Brian’s story, his bravery in sharing his raw emotions with us, and despite his depressing circumstances, his fortitude, his sense of humor, and compassion for others who shared in his loss. 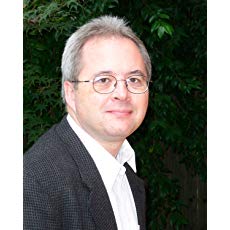 Brian Fies is a science writer, illustrator, and cartoonist whose widely acclaimed first graphic novel, Mom's Cancer, won the 2005 Eisner Award for Best Digital Comic (the first web comic to win the award and inaugurate this new category), the Lulu Blooker Prize for Best Comic, the Harvey Award for Best New Talent, and the German Youth Literature Prize, among other awards and recognition. He lives in northern California.