FLASHBACK FRIDAY: So Enchanting by Connie Brockway- Feature and Review 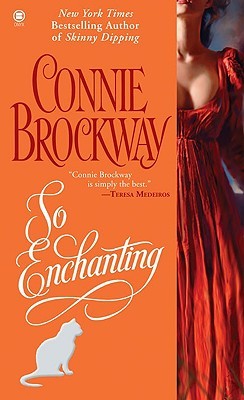 Years ago, lovely young Francesca Walcott ruled the fringes of London society as a mysteriously gifted medium. Until the uncompromising Lord Greyson Sheffield accused her of being a fraud, shattering her world and sending her into exile in the Scottish Highlands.
Now Greyson has received word of a young witch in Scotland, and he travels to Little Firkin to investigate, only to find that the girl in question has a companion who is none other than Fanny Walcott, now a ravishing woman. Audacious Fanny is more than his match in every way, and as the sparks of challenge set fire to a passion neither can control, is prepared to risk everything for the one woman he can never forget.
Fighting an unseen enemy, thrown together by danger and desire, the cynic and the enchantress discover their own brand of magicand a love too powerful, too consuming, too beguiling for either to resist.

So Enchanting by Connie Brockway
My rating: 4 of 5 stars

So Enchanting is a 2009 Penguin Group publication.

Six years ago, Francesca Walcott, along with her husband, was exposed as a fraudulent spiritualist. Shortly thereafter, Fanny becomes a widow and re-invents herself.

She is offered the job of governess to Amelie, a girl who has had a few experiences with the paranormal. Fanny embraces her new identity, and raises Amelie after her father dies and her guardian is too busy to become a part of her life.

However,  an unusual provision in Amelie's father's will keeps her trapped in a small community until she becomes of age or marries. But, then a letter arrives to her guardian claiming that someone is out to harm Amelie. The man still can't seem to find the time to investigate on behalf of his charge, so he sends Lord Greyson Sheffield and his nephew to see if there is any truth to the claim.

Well, it turns out there is plenty to worry about- for Fanny.   is the very man that exposed Fanny six years ago. Now he is convinced she is up to her old tricks and intends to find out what kind of scam she is tying to pull this time.

In the meanwhile, Amelie has fallen in love and wants to leave the small community she is tied to more than ever. Not only that, it appears that the threat against Amelie may be real.

This is a delightful, light, historical/paranormal romance. has a strong opinion in regards to spiritualist and mediums and all things magic. His father spent his fortune hoping to make contact with his dead wife and daughter. But, when sets eyes on Fanny, he finds his attraction to her unsettling. Now, six years later he finds himself fighting that attraction more than ever. But, can Fanny convince the skeptical that magic really does exist? 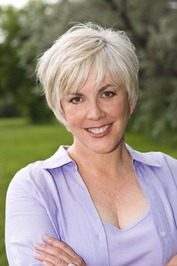 New York Times and USAToday best selling author Connie Brockway has twice won the Romance Writers of America's Rita award for best historical romance as well as being an eight time finalist. After receiving a double major in art history and English from Macalester College, Connie entered grad school with an eye to acquiring her MFA in creative writing. Soon enough, she jettisoned the idea of writing serious literature what she considered (and still considers) the best gig in the world, writing romance. Connie has received numerous starred reviews for her romances in Publisher's Weekly and Library Journal. Library Journal also named her Her 2004 romance, My Seduction, one of the year's top ten romances.
Today Connie lives in Minnesota with her husband David, a family physician, and two spoiled mutts.