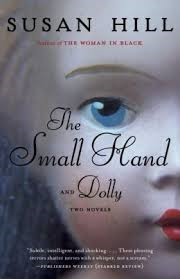 ABOUT THE BOOK:
Two chilling ghost stories from the author of The Woman in Black, both set in crumbling English houses that are haunted by the spirits of thwarted children. A VINTAGE TRADE PAPER ORIGINAL.
In The Small Hand, antiquarian bookseller Adam Snow is returning from a client visit when he takes a wrong turn and stumbles across a derelict Edwardian house with a lush, overgrown garden. Approaching the door, he is startled to feel the unmistakable sensation of a small cold hand creeping into his own, almost as though a child had taken hold of it. Plagued by nightmares, he returns with the intention of figuring out its mysteries, only to be troubled by further, increasingly sinister visits. In Dolly, orphan Edward Cayley is sent to spend the summer with his forbidding Aunt Kestrel at Iyot House, her decaying home in the damp, lonely fens. With him is his spoiled, spiteful cousin, Leonora. And when Leonora's birthday wish for a beautiful doll is denied, she unleashes a furious rage which will haunt Edward for years afterward.

The Small Hand and Dolly by Susan Hill
My rating: 4 of 5 stars

Small Hand and Dolly by Susan Hill is a 2013 Random House publication.

The first story is 'The Small Hand', and is about a rare and antique book dealer that takes a wrong turn. Our dealer sees a white house, with gardens, once beautiful, but now unkempt.  He knows it's unlikely anyone lives there, but he approached the house, hoping someone could give him directions. It is at this time he feels a small hand in his.

The sensation of feeling this child's hand in his begins to occur from time to time and starts to impact the man's life. He is obsessed with relocating the house and putting to rest the reason he is being haunted.

The second story is 'Dolly', and deals with a pair of cousins who are forced, as children, for one reason or another, to live with their aunt. Now, the cousins are adults and have been informed their elderly aunt has passed away. So they return to the house of their childhood. Memories surface regarding the wish for a certain type of doll and receiving another one instead. It seems that the aunt and the doll are not too happy about being mistreated.

The queen of ghost stories,  Susan Hill, gives us two spine tingling stories, both set in Britain. "The Small Hand' was my favorite of the two, but "Dolly has a few really good twists- although it really isn't technically a GHOST story- perhaps 'haunting' is a better word.

Either way, these stories are short and just right for anytime one is in the mood for a good ghost story!!

Susan Hill was born in Scarborough, North Yorkshire in 1942. Her hometown was later referred to in her novel A Change for the Better (1969) and some short stories especially "Cockles and Mussels".
She attended , where she became interested in theatre and literature. Her family left Scarborough in 1958 and moved to Coventry where her father worked in car and aircraft factories. Hill states that she attended a girls’ grammar school, Barr's Hill. Her fellow pupils included Jennifer Page, the first Chief Executive of the Millennium Dome. At Barrs Hill she took A levels in English, French, History and Latin, proceeding to an English degree at King's College London. By this time she had already written her first novel, The Enclosure which was published by Hutchinson in her first year at university. The novel was by The Daily Mail for its sexual content, with the suggestion that writing in this style was unsuitable for a "schoolgirl".
Her next novel Gentleman and Ladies in 1968. This was followed in quick succession by A Change for the Better, I'm the King of the Castle, The Albatross and other stories, Strange Meeting, The Bird of Night, A Bit of Singing and Dancing and In the Springtime of Year, all written and published between 1968 and 1974.
In 1975 she married Shakespeare scholar Stanley Wells and they moved to Stratford upon Avon. Their first daughter, Jessica, was born in 1977 and their second daughter, Clemency, was born in 1985. Hill has recently founded her own publishing company, Long Barn Books, which has published one work of fiction per year.
Posted by gpangel at 1:00 AM