Love and Other Consolation Prizes by Jamie Ford- Feature and Review 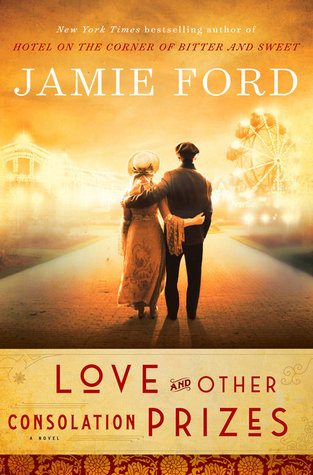 
From the bestselling author of Hotel on the Corner of Bitter and Sweet comes a powerful novel, inspired by a true story, about a boy whose life is transformed at Seattle's epic 1909 World's Fair.
For twelve-year-old Ernest Young, a charity student at a boarding school, the chance to go to the World's Fair feels like a gift. But only once he's there, amid the exotic exhibits, fireworks, and Ferris wheels, does he discover that he is the one who is actually the prize. The half-Chinese orphan is astounded to learn he will be raffled off--a healthy boy "to a good home."
The winning ticket belongs to the flamboyant madam of a high-class brothel, famous for educating her girls. There, Ernest becomes the new houseboy and befriends Maisie, the madam's precocious daughter, and a bold scullery maid named Fahn. Their friendship and affection the first real family Ernest has ever known--and against all odds, this new sporting life gives him the sense of home he's always desired.
But as the grande dame succumbs to an occupational hazard and their world of finery begins to crumble, all three must grapple with hope, ambition, and first love.
Fifty years later, in the shadow of Seattle's second World's Fair, Ernest struggles to help his ailing wife reconcile who she once was with who she wanted to be, while trying to keep family secrets hidden from their grown-up daughters.
Against a rich backdrop of post-Victorian vice, suffrage, and celebration, Love and Other Consolations is an enchanting tale about innocence and devotion--in a world where everything, and everyone, is for sale.

Love and Other Consolation Prizes by Jamie Ford
My rating: 4 of 5 stars

Love and Other Consolations Prizes by Jamie Ford a 2017 Ballantine publication.

A stirring, poignant story of love in its various stages and forms, crossing oceans and spanning decades-

This is my first novel by Jamie Ford. I haven’t read his bestselling first novel, Hotel on the Corner of Bitter and Sweet, but of course, I still plan to someday. This book, though, has been loitering around on my Kindle for a little while, and I’m trying to grab more books from the bottom of the TBR pile this year. This turned out a great choice.

As the blurb states, the story has a basis in fact, drawing from the raffle drawing at the 1909 World’s Fair, for a young boy!

Earnest Young, a mixed -race young boy, is raffled off to Madam Flora, who runs a brothel. He is stunned to find himself reunited with Fahn, a Japanese girl who was on the boat with him, during his trip to America. In short order, he is also introduced to Madam Flora’s daughter, Maisie, with whom he forges a close bond. Earnest falls in love with both girls. But a series of heartbreaking circumstances threaten to tear the three of them apart for all time…

As difficult as it is to learn about the Chinese and Japanese orphans and the cruelty they were subjected to, and exploitation of these young girls, this book was absolutely riveting and flush with historical details. I fell in love with the characters, and became emotionally invested in their plight.

The story is told with a dual timeline- ‘current day’ 1962, which alternates with the events that transpired in the early 1900’s. The reader knows that Earnest has a wife named 'Gracie' with whom he has two daughters and that Gracie is suffering from an unnamed malady that affects her memories and mood. Running in the backdrop is the Seattle World Fair, which of course brings back all those memories for Earnest, and piques the curiosity of his daughter, an investigative reporter, who wishes to write an article about him.

What we don’t know, is who 'Gracie' really is or what the mysterious ailment is that plagues her, or what secrets Earnest and Gracie have kept from their daughters.

I will admit I did find myself as conflicted as Earnest, understanding how he could love two women, and hoping desperately they found true peace and happiness, and that they all ended up with the person the really wanted to be with. The conclusion was simply lovely and so very bittersweet. I may have dabbed at my eyes just a little, but overall, I was very satisfied with the way things wrapped up. In fact, once I really thought it over, I can’t see how could have turned out better.

After reading this book, I can’t wait to see what wonderful discoveries are waiting for me at the bottom of my seemingly endless TBR pile. 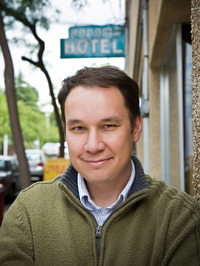 Jamie Ford is the great grandson of Nevada mining pioneer Min Chung, who emigrated from Kaiping, China, to San Francisco in 1865, where he adopted the western name "Ford," thus confusing countless generations. His debut novel, Hotel on the Corner of Bitter and Sweet, spent two years on the New York Times bestseller list and went on to win the 2010 Asian/Pacific American Award for Literature. His work has been translated into 34 languages. Jamie is still holding out for Klingon (that's when you know you've made it).Visit him at www.jamieford.com or on Twitter @jamieford.