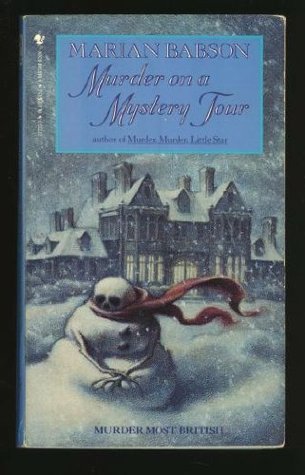 BRAMWELL...The hard-boiled American detective writer---stuck under Mama's thumb till death them do part.
AMARYLLIS...Bramwell's overbearing mother---whom the hotel staff would dearly love to strangle.
THE CHANDLER TWINS...Two identical, giggling bachelorettes---daffy but dangerous?
ROGER ACKROYD...The Manor's Mouser---he let an uninvited guest into the house.
When a real killer stalks a group of amateur sleuths on holiday, solving murders is no longer fun and games. Too many guests are checking out early from this eerie old English mansion. They're not settling their bills---or leaving enough useful clues.

Murder on a Mystery Tour by Marian Babson
My rating: 4 of 5 stars

Murder on a Mystery Tour by Marian Babson is a 1988 Bantam publication. (Originally published in 1985 by the Title “Not One Word Has Been Omitted”)

I’ve been dying to try out one of Marian Babson’s mystery novels for a long time. I plucked this one out of the pile because it has a very slight holiday/ wintery theme, to go along with my holiday reading this year.

I was concerned a bit by some mixed reviews, but for me, this one is a happy surprise. I thought it was great fun.

If you like ‘Golden Age’ mysteries, you will enjoy this novel and its backdoor homage to mystery novels written between 1920 and 1940.

Reggie and Midge have resorted to hosting ‘Mystery Tours’ to keep their manor house out of debt. The staff, guests and actors work in concert to present the ‘Mystery’.

Guests for this tour include Bramwell, a famous mystery author, and his overbearing mother, Amaryllis and the Chandler twins, who both have a crush on Bramwell.

And let’s not forget, Ackroyd, a cat named after the Agatha Christie novel- Who killed Roger Ackroyd- ironically enough.

While the story does have some issues, it was actually pretty clever. Two mysteries going at once- the staged one and the real one. Naturally, they become snowbound, just for kicks and giggles, adding to the uneasy tension in the house.

There are several big surprises, and red herrings, and is, of course, set up to resemble mystery novels from the Golden Age, which I happen to love, flaws and all.

The story is pretty busy, and can get a little confusing, with so many characters and the two mysteries running simultaneously. But, because the book is so short, I could take my time with it, so I didn't have too much trouble keeping it all straight. I love the dialogue and intrigue, and enjoyed trying to guess who the murderer was- in both mysteries.

Overall, this is a wonderfully entertaining mystery, and I truly had a great time reading it. All of Marian Babson's books are short, usually under three hundred pages, and often feature a feline presence. They probably fit better in the cozy category, but I think all mystery lovers will enjoy these books. 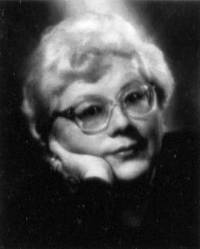 Marian Babson, a pseudonym for Ruth Stenstreem, was born in Salem, Massachusetts, but has lived in London for the greater part of her life.
She has worked as a librarian; managed a campaign headquarters; been a receptionist, secretary, and den mother to a firm of commercial artists; and was co-editor of a machine knitting magazine, despite the fact that she can’t knit, even with two needles.
A long sojourn as a temp sent her into the heart of business life all over London, working for architects, law firms, the British Museum, a Soho club, and even a visiting superstar.
She also served as secretary to the Crime Writers’ Association. Now she is a full-time writer whose many interests include theatre, cinema, art, cooking, travel, and, of course, cats, which feature in many of her mystery books. Her first published work was 'Cover-Up Story' in 1971 and 'Only the Cat' (2007) was her 44th novel.
The publisher's tagline for her style is "Murder Most British," a style reflected in each of her novels. Any violence is not graphically described and the sleuths are usually amateurs.
She does re-use certain characters, such as the publicity firm Perkins & Tate and a couple of ageing actresses, her books all stand-alone and can be read in any order.