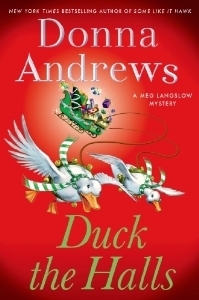 A new side-splitting Meg Langslow mystery from award–winning, New York Times bestselling author of Six Geese A Slaying, just in time for the holidays
The brilliantly funny and talented Donna Andrews delivers another winner in the acclaimed avian-themed series that mystery readers have come to love. A few nights before Christmas, Meg is awakened when Michael is summoned to the New Life Baptist Church, where someone has rigged a cage full of skunks in the choir loft. The lengthy process of de-skunking the church requires its annual pre-Christmas concert to relocate to Trinity Episcopal, where Mother insists the show must go on, despite the budget-related protests of Mr. Otis, an elderly vestryman. Meanwhile, when Meg helps her grandfather take the skunks to the zoo, they discover that his boa has been stolen—only to turn up later during the concert slithering out from the ribbon-bedecked evergreens.
It’s clear that some serious holiday pranksters are on the loose, and Meg is determined to find them. But before she can, a fire breaks out at Trinity, and Mr. Otis is discovered dead. Could this be a bit of nasty revenge from the now deposed Pruitt family? Or harassment from the Evil Lender? As Meg searches for answers she also races to finish all of her Christmas shopping, wrapping, cooking, caroling, and decorating in time to make the season jolly for Michael and the twins.
Guaranteed to put the "ho ho hos" into the holidays of cozy lovers everywhere, Duck the Halls is a gut-bustingly funny mystery, the latest from the award-winning Donna Andrews.

Duck the Halls by Donna Andrews
My rating: 4 of 5 stars

Duck the Halls by Donna Andrews is a 2013 Minotaur publication.

This holiday edition of the long running Meg Langslow series is centered around a string of criminal mischief incidents at several local churches. The damage done by these invasions has forced the churches, which are of differing denominations, to help each other out so their Christmas pageant show can go on.

Meg, who is helping Robyn, a new minister who happens to be both young and female, with her scheduling issues. In the process, Meg witnesses a few skirmishes between church members, all of whom seem to have forgotten the spirit of the holiday. Things go from bad to worse when one of them is murdered. Meg must prove which of the prime suspects is a murderous grinch, hopefully before the all important Christmas presentation.

This book, as with most of the books in the series, has some laugh out loud moments in it. The church politics and the stress of rehearsal for the Christmas pageant was humorous, because, while exaggerated for this story, was also a little too realistic.

The only small complaint I had was that Meg’s father and brother have very small and muted roles and I missed their presence. However, I did enjoy the prominence of the female characters in this one, with Meg’s mother working in concert with Meg, which was actually pretty funny.

This is the sixteenth installment in the series, and I inadvertently picked this one out thinking it was the sixth installment. I was shocked by some of the developments that took place since I’ve only read the first four or five books in the series, but sadly, I will not be able to read the series in order, because of a licensing issue with my library and the publisher So, it was just as well.

Despite missing out on the events that led up to this point, I found this story to be just as refreshingly funny as the previous installments, maybe even more so. The mystery is solid, and I enjoyed the festive atmosphere, and the touching, heartwarming conclusion.

Overall, this was a fun, highly entertaining holiday mystery anyone can enjoy.

Donna Andrews was born in Yorktown, Virginia, the setting of Murder with Peacocks and Revenge of the Wrought Iron Flamingos, and now lives and works in Reston, Virginia. When not writing fiction, Andrews is a self-confessed nerd, rarely found away from her computer, unless she's messing in the garden.