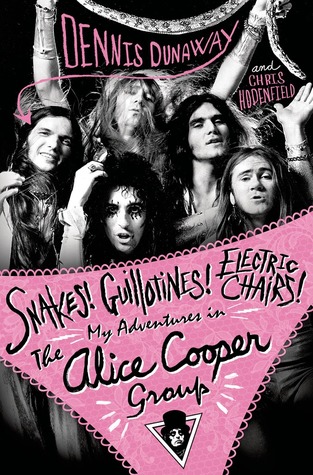 A hair-raising backstage memoir of the Alice Cooper band, from the bassist and co-songwriter, co-written by the journalist who first covered the band for Rolling Stone."Before the world heard of KISS, the New York Dolls, Marilyn Manson, or Ozzy Osbourne, there was Alice Cooper, the original shock-rock band." -Rock and Roll Hall of Fame
As teenagers in Phoenix, Dennis Dunaway, bassist and co-songwriter for the Alice Cooper group, and lead singer Vince Furnier (who would later change his name to Alice Cooper) formed a hard-knuckles band that played prisons, cowboy bars, and teens clubs. Their wild, impossible journey took them from Hollywood to the ferocious Detroit music scene, and along the way they discovered the utterly original performance style and look that would make them the stuff of legend.
Speaking out for the first time about his adventures in the Alice Cooper group, Dunaway reveals a band that was obsessed with topping themselves, with their increasingly outlandish shows and ever-blackening reputation. Dunaway takes readers into back rooms, behind brainstorming sessions, and into the most exclusive parties of the 1970s, revealing the talent, drama, and characters that drove two teenagers to create what would become America's highest-grossing act.
From struggling for recognition to topping the charts with a string of hits including "I'm Eighteen," "School's Out," and "No More Mr. Nice Guy," the Alice Cooper group was entertaining, outrageous, and one of a kind.
Snakes! Guillotines! Electric Chairs! is a riveting account of the band's creation in the '60s, their strange glory in the '70s, and the legendary characters they met along the way.

Snakes! Guillotines! Electric Chairs!: My Adventures in the Alice Cooper Group by Dennis Dunaway
My rating: 4 of 5 stars

An insightful, provocative and fascinating look at the Alice Cooper Group!

Okay. A show of hands. How many of you knew that Alice Cooper was the name of a band before it became the trademark persona of Vince Furnier, the band’s lead singer?

I'd never heard of the Alice Cooper Group, truthfully. It wasn’t until Vince took the name legally and began to show up on more mainstream forms of media, that I took any notice. So, for me, Vince was Alice Cooper.

It wasn’t until decades later when I watched a documentary- not sure if it was ‘Behind the Music’ or something else- that I discovered the process in which Alice gained control over the name and his solo career skyrocketed.

This is a really an old story in many ways. In fact, if Grady Hendrix had set ‘We Sold Our Souls’ a couple of decades earlier, The Alice Cooper band would fit right into the narrative.

Dennis Dunaway is the bassist and a founding member of the group, which he helped start with Vince back when they were teenagers living in Phoenix. 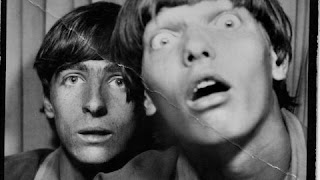 The group was an anomaly for their time. They were one of the first, if not THE first rock bands to embrace the androgynous look. They were always looking for fresh ideas and trying to take whatever the current trends were a bit further, which occasionally made them a target in conservative Phoenix.

They were not the first musicians to add theatrics to their show, by any means. Look up Screamin’ Jay Hawkins, for an example. But, for all intents and purposes, the Alice Cooper Group was the first of its kind.

I think the timing was just perfect for this group to capture the imaginations of rock fans. But, their climb up to rock and roll iconoclast honors was a long, hard journey. There was no ‘American Idol' back then, so these guys had to earn their status the hard way, by paying their dues.

The band played small seedy clubs, nearly starved to death, and stayed in fleabag motels. They rubbed elbows with rock legends, before they were rock legends, and even got a leg up from the one and only Frank Zappa. They were also supported by the now notorious GTO’s who also helped with stage outfits and performance ideas.

But just as they were on the cusp of really breaking out, the group was chewed up by the rock machine and spat out, transforming Vince into the stage persona he had spent years perfecting. He, literally, and legally, became Alice Cooper.

Well, they never reached the pinnacle of fame Alice did. But, this is a book about Dennis’ adventures while he was a part of the band. And what a wild and crazy ride it was. The irony is that the band was so close knit, exhibiting a solidarity rarely seen in rock groups. So, the story, while as old as rock itself, is also a cautionary tale, a realistic look at the business of rock and roll and the inevitable toll it takes. It either envelopes you until it sucks out your very soul or kicks you to the curb leaving you thirsting for more.

Dennis is obviously still harboring a grudge, although he tries to downplay it, but who can blame him? But, despite everything, I don't think he ever stopped caring about his old friend, Vince.

When he mentioned the famous interview Alice did on the Tom Snyder show in the early eighties, I hurried over to YouTube to see if I could find a clip. The videos I found were not very good, quality wise, but the images of Alice are shocking. He literally looked like death warmed over. Although, this is Dennis’ memoirs, his personal recollections, Alice is a larger than life presence in the book. But, another bittersweet spirit hovering nearby was that of lead guitarist, Glen Buxton.

This book is full of wild and crazy rock and roll antics. Dennis, and his fellow band mates may not have gotten the fame, or money, or the amount of credit they deserved, but they made an indelible mark on rock music, and its culture, and left a rich and legendary legacy for many future stars who benefited from their pioneer experimentations and boldness.


This book seemed like a catharsis for Dennis. A way to vent out a little of his bitterness, to recall the fun times, the crazy times and accept some love and long overdue appreciation for his part in changing rock and roll, and was a tribute to his friend, Glen. Dennis is still out there doing what he does best- playing music.

This is a fun, nostalgic book. It’s not overly whiny or heavy, although Dennis does reiterate the cruel twist of fate the Alice Cooper group was dealt a time or two. However, Dennis and the other band members, occasionally work with Alice, despite all the water under the bridge. They still get together, still hang out and still write songs together, which is good to know. 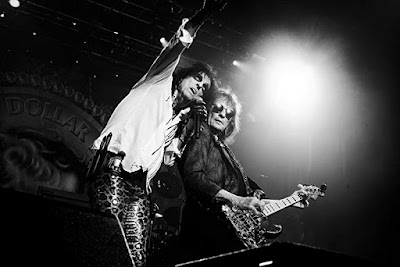 Fans of nostalgia, rock music memoirs, history and pop culture will enjoy reading this one. I did enjoy hunting down information about the group and watching a few videos-(although the quality is not always too great), even though I was never a huge fan growing up. It is easy to see their influence, and in some ways, they still seem cutting edge. If nothing else they were imaginative, creative, and daring, and will go down in rock and roll infamy. 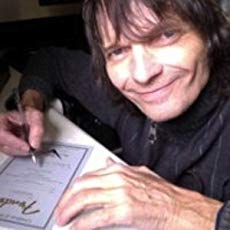 Dennis Dunaway was inducted into the Rock and Roll Hall of Fame in 2011 as a founding member of the band named Alice Cooper. Dennis won a Grammy for co-writing "School's Out." The original Alice Cooper group have sold millions of singles and albums and were on the cover of Forbes for having the largest grossing tour in 1973 over Led Zeppelin and the Rolling Stones. The group are in the Guinness Book of World Records for largest indoor audience of an estimated 120,000 to 148,000 in Sao Paulo, Brazil in 1974. The Billion Dollar Babies album reached number 1 in America and Britain, and the group are recognized as the innovators of theatrical rock shows, which includes giant balloons, hangings, guiollotines, snakes and spidery eye makeup. The group's movies are Diary Of A Mad Housewife, Good To See You Again: Alice Cooper, and Super Duper Alice Cooper. Dennis' book, Snakes! Guillotines! Electric Chairs!: My Adventures In The Alice Cooper Group has been translated into German, and the audiobook, narrated by Dennis (in English), is available at Audible.com. Dennis currently records and tours with Blue Coupe featuring Joe and Albert Bouchard of Blue Öyster Cult fame and singers Tish and Snooky of Manic Panic. The original Alice Cooper group recorded three songs on Alice's Welcome 2 My Nightmare album, and re-recorded "School's Out" with Joe Perry and Johnny Depp for the Hollywood Vampires album. Recently, the Alice Cooper group reunited to co-write and record several songs on the Alice Cooper Paranormal album produced by Bob Ezrin, and the group toured the United Kingdom in November 2017.
Posted by gpangel at 1:00 AM