HAPPY HALLOWEEN! We Sold Our Souls by Grady Hendrix- Feature and Review 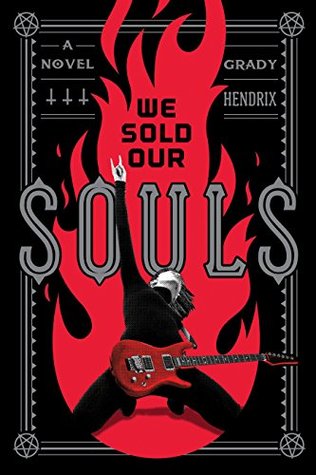 A new novel of supernatural horror (and pop culture) from the author of Horrorstor, My Best Friend's Exorcism, and Paperbacks from Hell.In the 1990s, heavy metal band Dürt Würk was poised for breakout success -- but then lead singer Terry Hunt embarked on a solo career and rocketed to stardom as Koffin, leaving his fellow bandmates to rot in rural Pennsylvania.
Two decades later, former guitarist Kris Pulaski works as the night manager of a Best Western - she's tired, broke, and unhappy. Everything changes when she discovers a shocking secret from her heavy metal past: Turns out that Terry's meteoric rise to success may have come at the price of Kris's very soul.
This revelation prompts Kris to hit the road, reunite with the rest of her bandmates, and confront the man who ruined her life. It's a journey that will take her from the Pennsylvania rust belt to a Satanic rehab center and finally to a Las Vegas music festival that's darker than any Mordor Tolkien could imagine. A furious power ballad about never giving up, even in the face of overwhelming odds, We Sold Our Souls is an epic journey into the heart of a conspiracy-crazed, paranoid country that seems to have lost its very soul...where only a girl with a guitar can save us all.

We Sold Our Souls by Grady Hendrix
My rating: 5 of 5 stars

We Sold Our Souls by Grady Hendrix is a 2018 Quirk Books publication.
It’s the 90s and heavy metal rules the rock and roll music machine.
Dürt Würk is right on the cusp of fame when suddenly their singer, Terry Hunt, pulls out, goes solo, changes his name and becomes a mega-superstar. He leaves his former bandmates in the dust, taking everything with him, including the rights to their music.

Decades pass, and Dürt Würk’s guitarist, Kris Pulaski, is barely scraping by, working as the night manager at a Best Western motel. Her dreary, miserable days suddenly explode into a fight for her very soul when she makes a shocking discovery about Terry’s meteoric rise to fame. It is imperative she reconnect with her former bandmates and get the band back together.

Meanwhile, Terry, aka, ‘Koffin’, is headlining a massive rock show in Las Vegas with record breaking crowds expected to attend. If Kris doesn’t get there in time, many more souls may be lost.

Full disclosure- I read Grady Hendrix’s ‘Paperbacks from Hell’ and loved it. The book highlighted pulp horror novels from an era I was familiar with, and it was done with humor, and intelligence. So, when I saw this book by Hendrix, I couldn’t resist. The thing is I don’t read horror novels a lot, except around Halloween, and I was never into the type of metal featured in this story, but…

I have a son who was just at the right age to appreciate pure metal and I heard my fair share of it bleeding through his bedroom walls. The 'nu-metal' was also in the house, which is, evidently, according to this novel- frowned upon by purists. Anyway, my point is, I am familiar enough with the culture to recognize the bands and understood most of the references.

At the end of the day, the story is one that has endured for ages- the classic myth of selling one’s soul for fame and fortune, with the devil getting the last laugh. Except in this case, souls were sold without their knowledge, and they are desperate to free themselves from the contract which has sealed their fate. This is a nice twist, and I loved that Kris is a kick-butt female guitarist in an overwhelmingly male dominated environment.

Of course, this is a cautionary tale and there is a moral to the story. I love that about this book. It’s a gory, supernatural, futuristic horror story, featuring hardcore metal music, but there is still message and a lesson to be learned from it. While the legend of ‘selling one’s soul’ conjures up woo-doo, a thing about chickens, and visions of crossroads, and is often taken in the literal sense, I think it’s allegorical and yes, many a musician has fallen into the trap.

There are other points the author zooms in on, that while not entirely original, will still make you think. The one downside was the ending. I was expecting a huge, epic showdown, but it ended up being a whimper instead of a roar. Other than that, this story is an homage to heavy metal, to rock and roll, and horror novels. It’s a little tense, has some gross out gore, but also a healthy dose of humor and satire. It will also give you nightmares about UPS trucks, but overall, this is rip-roaring, spine-tingling tale of horror, but was also a whole lot of fun to read! 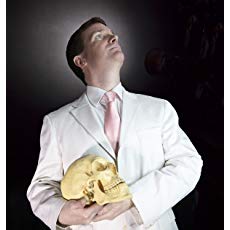 Award-winning author Grady Hendrix has written about the confederate flag for Playboy magazine, covered machine gun collector conventions, and scripted award shows for Chinese television. His novels include HORRORSTÖR about a haunted IKEA, MY BEST FRIEND'S EXORCISM, which is basically "Beaches" meets "The Exorcist", and WE SOLD OUR SOULS, a heavy metal horror epic out now from Quirk Books. He's also the author of PAPERBACKS FROM HELL, a history of the horror paperback boom of the Seventies and Eighties, and the movie MOHAWK, a horror flick about the War of 1812, and the upcoming film, SATANIC PANIC. You can discover more ridiculous facts about him at www.gradyhendrix.com.
Posted by gpangel at 1:00 AM