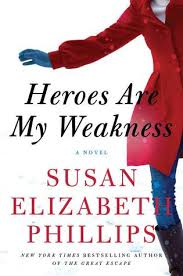 Annie Hewitt has arrived on Peregrine Island in the middle of a snowstorm and at the end of her resources. She's broke, dispirited, but not quite ready to give up. Her red suitcases hold the puppets she uses to make her living, the romantic novels she loves, and a little bit of courage--all she has left.

Annie couldn't be more ill prepared for what she finds when she reaches Moonraker Cottage or for the man who dwells in Harp House, the mysterious mansion that hovers above the cottage from a windblown cliff. When she was a teenager, he betrayed her in a way she can never forget or forgive. Now they're trapped together on a frozen island along with a lonely widow, a mute little girl, and townspeople who don't know how to mind their own business. Is he the villain she remembers or has he changed? Her head says no. Her heart says yes. It's going to be a long, hot winter.

Heroes Are My Weakness by Susan Elizabeth Phillips
My rating: 4 of 5 stars


Heroes are my Weakness by Susan Elizabeth Phillips is a 2014 William Morrow publication.


When I start a book by this author it is strictly from a fan girl approach. I don't doubt for a minute the book will be good. When I saw this one had a Gothic tone I was especially exited.

Annie Hewitt arrives a the cottage on a small secluded island in Maine that she inherited from her recently deceased mother.  Annie spent summers here once upon a time, but the memories are not pleasant. When she sees there is no running water or heat, she is forced to visit  Harp house to make arrangements to work on getting the cottage in liveable condition.


But, Annie's going through a bad patch. Her mother's health issues have drained her bank accounts, and her job as a ventriloquist is at a crossroads after she and her partner split. However, the voices of her puppets are an extension of herself, each with their own personality. Coming to the cottage is something she really didn't have much choice about and due to a strange codicil in her mother's divorce years ago, she must live in the cottage for 2 months out the year. But, the last person on earth she expected to encounter on the island was Theo Harp... a man who once tried to kill her.

“He descended slowly. A Gothic hero in a pearl gray waistcoat, snowy white cravat, and dark trousers tucked into calf- hugging black leather boots. Hanging languidly at this side was a steel barreled dueling pistol."

Annie and Theo had a very complicated past together in their teenage years. Now they are both hiding out on the island for one reason or another.  Each holds their cards close to the vest, but for Annie, her secrets may have painted a target on her back.

There is a legacy her mother left her, but Annie has yet to figure out what that is. However, someone on the island is just as eager to discover it. With Theo's dark background and their shared past, Annie is immediately wary of Theo.

If this isn't enough drama for you, add a young mother with a small child who refuses to speak, a slew of medical emergencies on the island and the mystery of what took place between Annie and Theo all those years ago.

I think for some who have read SEP in the past, this book might be something of a departure from what you are used to. I happen to love Gothic flavored stories, so of course I was all in. The book is modern Gothic, but pays homage to the Jane Eyre style of storytelling.

Dark, brooding, misunderstood heroes with an air of danger about them is always interesting because the reader is not quite sure if they trust him or not,  and nor does the female protagonist. This creates a edge of suspense and mystery, especially when it looks like there is a real threat out there.

While Jane Eyre was obviously the inspiration here, I also thought I picked up a little Northanger Abbey too. I had to laugh on more than one occasion, especially at Theo, who was actually pretty cool despite his troubled life and the self inflicted guilt he carries, accepting blame for the actions of others. But, of course Theo is a true hero-  or well, he's Annie's hero through and through.

This is a bit of an unconventional romance,but it worked for me. The start up is a little slow, and remains at a steady pace, but never becomes very brisk. However,  I think that is the style the author was going for.  Some parts of the plot were predictable and I did guess at what was happening on the island and why Annie was a target. But, this is really a small complaint because I was pretty impressed with the author's foray into this genre and found it quite refreshing to read something out of the ordinary for a change. 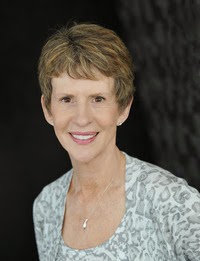 The Huffington Post says the books of Susan Elizabeth Phillips provide a “gateway drug to the whole [romance] genre,” which she assumes is a good thing. Bookpage magazine calls her “the crown jewel of romantic comedy writers,” which is definitely a good thing. Since she wrote her first novel on a typewriter in her kitchen, her books have been published in over 30 languages and appear on bestseller lists all over the world.
In addition to being a New York Times, Publisher’s Weekly, and USA Today bestseller, she is a hiker, lazy gardener, horrible singer, passable cook, passionate reader, wife, mother of two grown sons, and grandmother of two adorable little ones. Her newest book, THE GREAT ESCAPE, is now available in hardback and will be released in trade paperback in April 2013. You can visit Susan on Facebook or on her website, where she’s added a special Members Only Lounge.
Posted by gpangel at 1:00 AM