After the terrifying events of Belief, Ethan Hall has been charged with multiple homicides. His trial is about to begin – will it bring closure for Marcus Kline and those he loves? Ethan has been in solitary confinement in the medical wing of a prison for several months. However officers still have to interact with him and he has hypnotised two of them to kill ex-offenders. He has also chosen to defend himself in court. Surely justice will prevail?


Anne-Marie Wells sat bolt upright in her bed as the nightmare forced her awake. Her right hand was clutching at her chest. Her heart was thudding against her breastbone as if trying to escape. Tears were flowing down her cheeks, mixing with her sweat. The words of Ethan Hall echoed in her mind. She bit back the urge to scream with rage.


The dream had made her orgasm again, just as it had last night and the night before. He had been reappearing in her dreams, repeating the abuse, increasingly as the trial drew closer.


The master hypnotist. The great manipulator and destroyer of lives. The man she had first seen preparing to kill her husband, Marcus Kline.


Worse than the worst form of cancer.


Anne-Marie knew that for certain. Despite Marcus’s best efforts to save her, she had been dying of ovarian cancer when she had opened the door and looked into Ethan Hall’s penetrating eyes. He had hypnotised her effortlessly and deeply. She remembered vaguely images of green fields, of feeling she had left her body behind, that the cancer was disappearing – dissolving - as his words moved through her.


She remembered more clearly what happened next. She had no doubt that was his intention.


‘You have to show me your bedroom,’ he had said, before walking her to the stairs.


She had led the way, then laid down on the bed - this bed - because he ordered her to. The hypnotic trance he had created pinned her in place. She felt her body betray her as his words invaded deep inside, making her orgasm against her will time after time.


Ethan Hall raped her without once touching her physically.


He raped her after saving her life.


And she had told no one. She never would. It was the only certainty left in her life. He had created a secret that held her prisoner more completely than any cancerous cells ever could.


Now her illness was in remission – ‘Miraculous’, her doctors called it – and she hated herself and her life almost as much as she hated Ethan Hall.


Worse than the worst form of cancer.


Anne-Marie looked to her left. Marcus wasn’t there. Again. Third night in a row she had woken from her recurring nightmare to find herself alone.


Not so long ago, before Ethan’s arrest, before his visit, Marcus was always close by, ready to hold and comfort her whenever the cancer-dreams attacked. It was, she reflected, just as well he had been unable to sleep of late; the only thing that could make this dream worse, would be having Marcus next to her when she woke. Her very sanity depended on no one ever discovering her secret.


Anne-Marie forced herself out of the bed and crossed to the window that looked out over the rear garden and the valley beyond. He was standing in the middle of the lawn with his back to the house, just as he had been on the two previous nights.


Tonight he was looking at the earth rather than the stars.


She had wanted to move out of this rented house, but had forced herself to stay. She wanted to burn the bed, but how would she possibly have explained that to Marcus?


‘Ethan is driving us apart,’ she whispered, ‘just when we most need to be together.’


She turned away from the window. The bed dominated the room. Anne-Marie looked at the bedside clock with its illuminated hands.


Six hours before the trial of Ethan Hall began.


Chapter 4 Marcus Kline was oblivious to the bitter January chill, to the silence in the garden and the valley, to the darkness.


‘Perhaps we do live in a world of ghosts.’ His wife had said to him only hours after his best friend DCI Peter Jones had informed them of Ethan Hall’s arrest. ‘And, if we do, perhaps they see us as the otherworldly beings.’ A world of ghosts.


It felt increasingly as if she was right. Only the ghosts weren’t spiritual entities. They were memories; fragments of the past with lives of their own. Fragments that could whisper or shout, influence your behaviour, blind you to things happening right in front of your eyes. Fragments that reached out, morphing subtly as they shaped the present.


Marcus Kline could remember the time when he had believed himself to be the most powerful communicator alive, when his consultancy, Influence, had been in demand from leaders across the globe. But since he had become a victim of Ethan Hall and lurched terrifyingly close to a complete breakdown, that success had evaporated and the associated memories had all but disappeared over the horizon of his mind. In the forefront now were powerful, pressing images of how easily Ethan Hall had won their battle of words, of the scalpel in Ethan’s hand pressing against the skin just above his temple, of his wife’s cancer.


No matter how much Marcus wanted to believe his use of hypnosis and trance-states had played a pivotal role in AnneMarie’s incredible recovery, he simply couldn’t. The cancer, combined with a mind-numbing fear of losing his wife, had proven too much for him. He had failed the most important task he had ever undertaken. He was at once overjoyed at Anne-Marie’s return to health and deeply ashamed of his inability to help her.


And in a few, short hours the trial of Ethan Hall, his nemesis, would begin. Soon the two would be face to face for the first time since Ethan had almost killed him.


Marcus reached into his jeans pocket and took out his mobile phone. He needed to listen to Peter Jones’s voice message again. He had received it eight hours earlier. He had replayed it five times already. He pressed the phone to his ear as the familiar voice sounded.


‘I hope you are both doing your best to relax today, and that you get a good night’s sleep. If you are going to think about anything, remember what you saw and heard when we went to court last month to watch a trial in progress. You’ve been there, seen it and heard it now, so you know what to expect in terms of procedure and attitude. The only difference, as we’ve talked about, is that this is a much more high-profile trial than the one we visited. There’ll be a lot of media attention. You can expect them to focus on you and Ethan Hall equally. So use all your skills and experience to present yourself well; at all costs avoid getting drawn into any sort of confrontation with the press. Or with Ethan. Especially with him.’


‘When you are in the witness box listen carefully to each question you are asked and answer only that. Answer precisely, simply, and say nothing more than is required. If anyone can separate the question from the questioner, it’s you my friend.


Whatever you think about yourself currently, I still regard you as the best in the world at what you do. It’s crucial, though, that you avoid a communication battle with Ethan in court. It’s what he’ll want. It’s what he’ll expect. We can’t play into his hands.’


‘Leave the winning up to Mike. It’s his world. You just do everything in your power to distance yourself from the memories of what Ethan has done and deal with the present in as clean and simple a manner as possible. You can do this Marcus. Trust me. Trust yourself. Find some way to cocoon yourself from the past and from your feelings towards Ethan. This time you’ll influence best by not taking the lead.’


‘And remember what Imran, the owner of the curry house says. Everything passes. Even this. When all is said and done, Ethan Hall is just a piece of shit so let’s flush him away and move on. There are much better things to focus on in life. Right? Be brave.’


Distance yourself from the memories.


He knew how. He’d helped countless other people change their relationship with past events. Only this time it was different. The memories he needed to escape from felt as if they were imprinted in the front of his brain, as if they were attached to a seemingly innocent range of objects and places he encountered every day.


Daren’t even try. Right now it was impossible to differentiate a cocoon from a prison cell. He felt too isolated and trapped to even consider another form of separation. Not every cocoon protects and releases life, he told himself. Some became finely woven coffins. Some things just don’t pass through easily. Some things stick and stay. And then eventually, unable to process, unable to make a clean start, the organism dies.


Marcus Kline inhaled deeply, letting the winter air chill his lungs. He wondered if Ethan Hall was having a good night’s sleep. He wondered who else was awake thinking about what the day would bring.
He glanced back at the house and decided to stay out a while longer. There was no point trying to go to sleep now. And besides, for some reason, the house felt colder than the winter air.
GET YOUR COPY HERE: 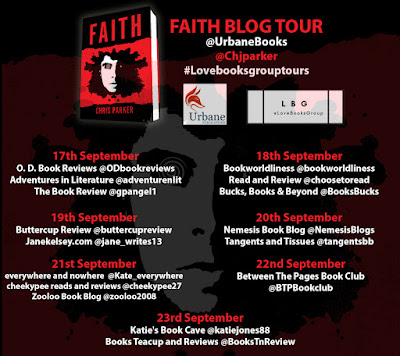 Based in Nottingham, Chris Parker is a specialist in Communication and Influence. A Licensed Master Practitioner of Neuro Linguistic Programming (NLP), Chris is a highly experienced management trainer, business consultant, lecturer and writer. Books include Influence, Belief, Campaign It, Brain Always Wins, Diego Masciaga Way, The City Fox and Debris.