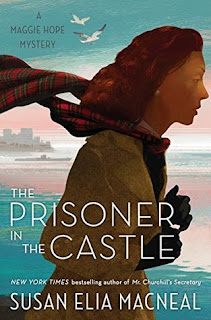 American-born spy and code-breaker extraordinaire Maggie Hope must solve a baffling series of murders among a group of captive agents on an isolated Scottish island as the acclaimed World War II mystery series from New York Times bestselling author Susan Elia MacNeal continues.Maggie Hope is being held prisoner on a remote Scottish island with other SOE agents who know too much for the enemy's comfort. All the spies on the island are trained to kill--and when they start dropping off one-by-one, Maggie needs to find the murderer... before she becomes the next victim.

The Prisoner in the Castle by Susan Elia MacNeal
My rating: 4 of 5 stars

The Prisoner in the Castle by Susan Elia MacNeal is a 2018 Bantam publication.

A classic ‘locked room’ mystery in a house full of spies!!

I will confess this installment in the Maggie Hope series was not at all what I was expecting. However, I found it was a nice change of pace after enduring some gut-wrenching emotional punches in the last few chapters of the series.

If you like golden age or ‘locked room’ mysteries, Ala Agatha Christie’s ‘And Then There Were None’, you will love this one.

The story begins with Maggie being exiled to Scotland because SOE believes she is a liability, due to the bombshell military secrets she discovered. She is secluded away in an old Scottish castle along with other agents, who find themselves exiled as well, for various reasons. But, one by one, her fellow ‘guests’ are being murdered and Maggie is stumped, unsure who to trust, because, of course, they are all suspects.

The traumas and consequences of the war are not forgotten, but Maggie is not on an official assignment in this installment. But trouble followed her anyway. She's barely arrived when the first murder occurs. Meanwhile, Maggie’s friends and allies back home are beginning to suspect she may be in trouble. But, will they arrive in time and can they convince the SOE to release her?

Once it became clear that this book would be a bit of a departure from what I’ve come to expect, I was a little puzzled. I had expected some diabolical plot, but never imagined anything like this!!

But, it is hard not to be drawn in by the new spin on Christie’s classic. Before long, I caught myself playing along with the guessing game. Who would be the next victim? Who was the killer and what was the motive? A good old -fashioned mystery is always fun, but what about Maggie’s role as a spy? What does this story have to do with the war or Maggie’s mission? Well… let’s just say there is
A LOT going on at Scarra Isle.

MacNeal did a magnificent job of creating taut, edge of your seat suspense, starting with the location, and adding in a spectacular storm, and of course keeping the residents trapped, without any means of escape, with a deranged killer. Suspicion and paranoia reach the appropriate level of hysteria, building and building to the ultimate crescendo. This is not an exact copy of Christie’s novel, just to be clear. It has a fresh twist and is unique to this series, and not just some random intermission.

Yet, this installment is a bit unconventional, and unless you just want to enjoy a fresh twist on a classic golden age mystery, I wouldn’t recommend this one as a stand-alone. However, if you are a fan of this series, be ready to see Maggie’s detecting skills put the test in a way she never imaged.

Maggie will have more trials to face in the upcoming installment, if nothing else, but I think perhaps her dangerous knowledge that everyone thought would endanger war strategies, was blown out of proportion, and isn’t so dangerous anymore. A new assignment will most likely await her- and I’ll be there cheering her on!! 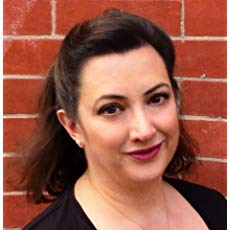 Susan is married and lives with her husband, Noel MacNeal, a television performer, writer and director, and their son in Park Slope, Brooklyn.