Us Against You by Fredrick Backman- Feature and Review 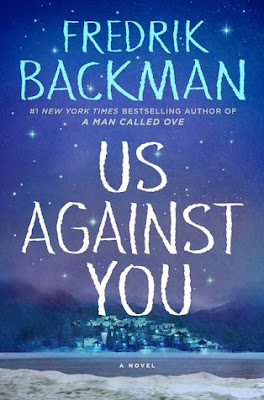 After everything that the citizens of Beartown have gone through, they are struck yet another blow when they hear that their beloved local hockey team will soon be disbanded. What makes it worse is the obvious satisfaction that all the former Beartown players, who now play for a rival team in Hed, take in that fact. Amidst the mounting tension between the two rivals, a surprising newcomer is handpicked to be Beartown’s new hockey coach.

Soon a new team starts to take shape around Amat, the fastest player you’ll ever see; Benji, the intense lone wolf; and Vidar, a born-to-be-bad troublemaker. But bringing this team together proves to be a challenge as old bonds are broken, new ones are formed, and the enmity with Hed grows more and more acute.

As the big match approaches, the not-so-innocent pranks and incidents between the communities pile up and their mutual contempt grows deeper. By the time the last game is finally played, a resident of Beartown will be dead, and the people of both towns will be forced to wonder if, after all they’ve been through, the game they love can ever return to something simple and innocent.

Us Against You by Fredrik Backman
My rating: 5 of 5 stars

Us Against You by Fredrik Backman is a 2018 Atria Books publication.

A sullen, yet optimistic examination of a town suffering an identity crisis and the residents who must learn to adjust to a new normal-

While many of us became fans of Fredrik Backman because of his unique ability to weave whimisical stories, featuring quirky, but loveable characters. This method of presentation often softened the darker tones. With Beartown, however, Backman didn’t sugarcoat the darker elements and created an edgier story than some were accustomed to, but one that truly resonated with many people.

Us Against You is the follow-up novel to Beartown and deals with the fallout and ramifications of the events that transpired in the first book, beginning with Maya’s assault accusations, which turned her family into pariahs.

When Peter learns that Beartown’s hockey team will be dismantled, he finds himself at the mercy of local politicians with their own shady agendas. The team players are offered positions with the rival town of Hed. This creates a division, on top of the tensions surrounding the situation with Maya, ultimately exposing a gap in priorities, and shines a bright spotlight on misogyny, and the lack of diversity. As a new team begins to form, the competition between the two towns reaches a fever pitch.

Meanwhile, Peter, Kira and Maya struggle to find balance in their lives again. For Peter, hockey is all he has ever known, and he has no idea how to give it up- not without a fight- even if he must make certain concessions. Kira is once again in the position of putting her career, her marriage, and herself in second place so that Peter can still pursue hockey- while both of them struggle to come to terms with what happened to their daughter.

Eventually, the tensions boil over- with devastating results…

As I said in my review of “Beartown” you don’t have to understand anything about hockey to ‘get’ this book. You can substitute a number of things for hockey, instead. Here in Texas, high school football is a molten god and many small towns depend on it for their revenue, their very identities, which was a parallel I immediately related to, but it doesn’t even have to be about sports- it’s whatever issue or situation that becomes an obsession. In this case it's blowing a sport, or a fun pastime out of all proportions, turning it into something else entirely.

The characters in this novel are complicated, raw, and so very human and so very real. Backman has a real knack for nailing human frailties, exposing the most sensitive fears and conflictions, as well as understanding the dynamics of small towns everywhere. While the story is bleak, the town and characters suffering setbacks and dissension, progress is not completely off the table. We’ll see people go to hell and back, face their darkest demons, take bold strides in combating ignorant bias and destructive attitudes and behavior, which will provides that allegorical explanation of the book’s title. Backman’s characters are pragmatist, occasionally cynical, often reflective, but also optimistic and tenacious, eventually leading them to a destination they were long overdue to arrive at.

In so many ways, Beartown points a mirror back at all of us- It’s me- it’s you- it’s every town, every city, everywhere. Once again, Backman nails it. This is a very thought provoking read, and expansion of Beartown that left me in a very contemplative mood, but also one of peace, and with a feeling that these characters can only go upwards from here. Fredrik Backman, a blogger and columnist, is the New York Times bestselling author of A MAN CALLED OVE and MY GRANDMOTHER ASKED ME TO TELL YOU SHE'S SORRY. Both were number one bestsellers in his native Sweden and around the world, and are being published in more than thirty five territories. His latest novel is BRITT-MARIE WAS HERE. He lives in Stockholm with his wife and two children. Visit him online at his blog: FredrikBackman.com, on twitter @backmanland, or on instagram @backmansk.