The Cadaver King and the Country Dentist: A True Story of Injustice in the American South by Bradley Balko and Tucker Carrington - Feature and Review 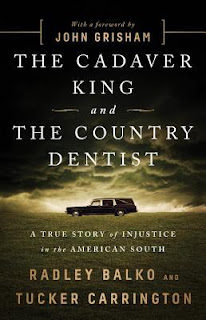 After two three-year-old girls were raped and murdered in rural Mississippi, law enforcement pursued and convicted two innocent men: Kennedy Brewer and Levon Brooks. Together they spent a combined thirty years in prison before finally being exonerated in 2008. Meanwhile, the real killer remained free.
The Cadaver King and the Country Dentist chronicles how the courts and Mississippi's death investigation system--a relic of the Jim Crow era--failed to deliver justice for its citizens and recounts the horrifying story of the two men who built successful careers on the back of this system. For nearly two decades, medical examiner Dr. Steven Hayne performed the vast majority of Mississippi's autopsies, while his friend Dr. Michael West, a local dentist, pitched himself as a forensic jack-of-all-trades. Together they became the go-to experts for prosecutors and helped put countless Mississippians in prison. But then some of those convictions began to fall apart.
Radley Balko and Tucker Carrington argue that bad forensics, structural racism, and institutional failures are at fault, and raise sobering questions about our criminal justice system's ability to address them.

The Cadaver King and the Country Dentist: A True Story of Injustice in the American South by Radley Balko
My rating: 4 of 5 stars

The Cadaver King and the Country Dentist: A True Story of Injustice in the American South by Radley Balko and Tucker Carrington is a 2018 Public Affairs publication.

This book is shocking me, yet, it doesn’t shock me. I know our system has its flaws, that each state has their own peculiar laws and that corruption reigns supreme everywhere. I’ve been reading about the wrongfully convicted since the early eighties when I picked up a book entitled “A Death in Canaan”, which chronicles the incredible story of Peter Reilly who was wrongfully convicted of murdering his mother. Since that time, I’ve followed other cases, such as Timothy Masters, who was convicted based on a fantasy drawing he sketched as a teenager, and the notorious case of the West Memphis Three. Now, Netflix’s “Making a Murderer” has catapulted wrongful convictions in the national spotlight turning such stories into a craze.

“Just as a cockroach scurrying across a kitchen floor at night invariably proves the presence of thousands unseen, these cases leave little room for doubt that innocent men, at unknown and terrible moments in our history, have gone unexonerated and been sent baselessly to their deaths”

Unfortunately, these situations are entirely too common- almost reaching epidemic proportions and often do not get the press like the aforementioned cases garnered. This book highlights a shocking amount in wrongful convictions in the state of Mississippi. While we generally hear the details once a long overdue exoneration occurs, such as when DNA evidence coming to light, we rarely get the full picture, and if you aren’t a resident of Mississippi, or a fan of true crime programming where this case might pop up on your radar, you probably never even heard of these cases, much less the incredible circumstances that sent two innocent men to prison for decades.

I strongly urge you to read this eye opening, incredulous saga which exposed Steven Hayne, a prolific performer of autopsies- the amount of which is mind-boggling, and his partner in crime-Michael West- a dentist who claimed to be an expert in bite mark forensics. However, the question really is- How did these two men manage to get away with their treachery for so long?

The criminal justice system in Mississippi will leave you slack jawed. What’s worse, it that no one with the ability to expose the cracks, or plug the holes, seems to care. It's like they prefer it this way. It’s appalling!

The book focuses primarily on the cases of Levon Brooks and Kennedy Brewer, who were each wrongfully convicted of murdering three- year old girls, in separate cases. Both Hayne and West helped put the men behind bars, tag teaming at the trial by testifying about the discovery of a bite mark found after the body was submerged in water for over twenty-four hours, in one case. !!! Really? Yep. The judge allowed it and jury believed it.

Readers are also given a lesson on what is viable DNA and forensic evidence. This was a real eye-opener for me- and I even felt a little abashed after reading the margin of error in ‘pattern matching’ forensics.

A judge, remember, allowed this evidence in at trial, and while there some insinuation that the jurors should have balked at the testimony of West and Hayne, I’m afraid most of us would have believed the ‘expert witnesses’, especially after having been exposed to this type of information on numerous crime shows and in plenty of crime fiction, which is passed off as fact, with zero margin for errors, when in truth they are subjective. Most people naively believe in the justice system, and as such, gave these men the benefit of the doubt- especially since they probably didn’t know how much they were being paid for their testimony.

“Recent investigations, exonerations, and studies have also revealed scientific shortcomings in ballistics comparison, tire tread analysis, shoe print analysis, handwriting analysis, and even fingerprint matching. Shaken Baby Syndrome has come under scrutiny. Drug field test kits have been shown to have scandalously high rates of false positives, as have drug-sniffing dogs and dogs used to identify suspects based on scents taken from clothes or from the air.”

This book is quite informative, but if you suffer from high blood pressure, you may want to digest it in small doses because it is absolutely infuriating. It is also a good idea to read it in increments due to the subject matter, and the volume of information one must digest. I found my eyes crossing on a few occasions, as the book did grow tedious in spots and wasn't always he most exciting material,since it was very fact driven, and not written in the 'true crime novel", format, so it could be pretty dry reading. I don't know if there was a way to jazz up the presentation, really, but it did seem to drag on at times. I read other books in between, and found it very easy to pick up where I left off, but it did take a while to get through it.

That being said, I can not even begin to imagine spending eighteen years of my life in prison for a crime I did not commit- or being sent to death row!! My stomach was in knots thinking about the flaws in forensics, the corruption, outright lies, bribes, and of course the enormous role poverty and race plays in getting a proper defense. Thank goodness for The Innocence Project and for books like this one that will perhaps educate the public so that we will exercise our critical thinking skills more often, especially if you ever find yourself serving on a jury. This book will certainly give readers a great deal to think about, and maybe even send a few shivers down your spine. The very idea that there are more people out there like Hayne and West should give you more than a few restless nights. 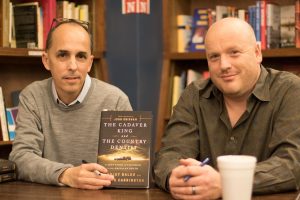 is the director of the Mississippi Innocence Project at the University of Mississippi School of Law. He has worked as a criminal defense lawyer for his entire legal career, most of it as a public defender in Washington, D.C.

Balko is also credited with bringing national attention to the case of Cory Maye, a black man who prior to Balko’s work was on death row in Mississippi for shooting and killing a white police officer during a raid on Maye’s home. Balko’s Reason feature on Maye was also cited in an opinion by the Mississippi State Supreme Court. National Journal also profiled Balko’s coverage of the case. Balko’s November 2007 investigative report on Mississippi medical examiner Steven Hayne won second place in the investigative reporting category for the 2007 Los Angeles Press Club awards.Balko was formerly a policy analyst with the Cato Institute. He has been a columnist for FoxNews.com, a senior editor at Reason, and has been published in the Wall Street Journal, Playboy, Time, the Washington Post, the Los Angeles Times, Slate, Forbes, ESPN, the National Post, Worth and numerous other publications. Balko has also appeared on the BBC, CNN, CNBC, Fox News Channel, MSNBC and NPR.Balko is also the author of Rise of the Warrior Cop: The Militarization of America’s Police Forces, published in 2013. He graduated from Indiana University with a degree in journalism and political science.