Murder on Union Square- by Victoria Thompson- Feature and Review 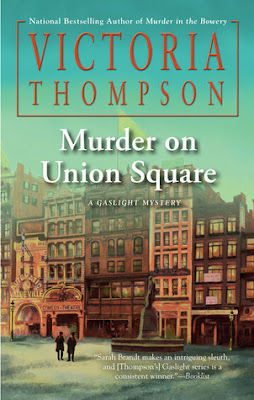 When a murder hits close to home, Frank finds himself in an unusual position--the prime suspect in the latest installment of the national bestselling Gaslight Mystery series...
Sarah and Frank Malloy are enjoying married life and looking to make their family official by adopting Catherine, the child whom Sarah rescued and has been raising as her daughter. The process seems fairly straightforward, but at the last minute, the newlyweds discover that Parnell Vaughn, Catherine's legal father, has a claim on the child, and his grasping fiancée is demanding a financial settlement to relinquish parental rights. Even though exchanging money for a child is illegal, Frank and Sarah's love for Catherine drives them to comply.
When Frank returns with the money and finds Vaughn beaten to death, all evidence points to Frank as the culprit. A not-quite-famous actor with modest means, Vaughn seems an unlikely candidate for murder, particularly such a violent crime of passion. But Frank soon uncovers real-life intrigue as dramatic as any that appears on stage.
Sarah and Frank enlist those closest to them to help hunt for Vaughn's killer as Frank's own life--and the future of their family--hang in the balance.

Murder on Union Square by Victoria Thompson
My rating: 4 of 5 stars

Murder on Union Square by Victoria Thompson is a 2018 Berkley publication.

When Sarah and Frank hit a legal snag in their quest to adopt Catherine, Frank seeks to find a solution without breaking any laws. It would appear their troubles were solved when Catherine’s legal guardian is murdered, but because Frank discovered the body, he becomes suspect number one. In order to clear his name and save his reputation, he and Sarah, with the help of Gino and Maeve, must discover who the real killer is.

This story is centered around the stage- the theatre, the actors and actresses, and the backstage politics, jealousies, and various love triangles. The situation is scandalous for the 1900s which made for some interesting dialogue. The story is fast paced, kept me guessing, and quite amused- especially Maeve and Gino who are becoming quite the detectives. I enjoy being a part of the puzzle solving, listening as Frank and Sarah talk out the various possibilities.

While this mystery wasn’t quite as engrossing as the last installment, it is, as always, a pleasure to drop in on Frank and Sarah and escape into the past, brought vividly to life by Thompson, to solve an interesting and unique crime.