Gateway to the Moon- by Mary Morris- Feature and Review 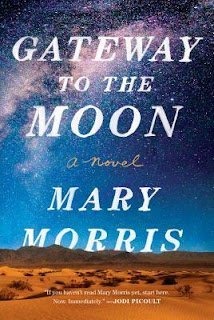 From award-winning novelist and memoirist Mary Morris comes the story of a sleepy New Mexican community that must come to grips with a religious and political inheritance they never expected.
Entrada de la Luna is the sort of town that ambitious children try to leave behind them. Poor health, broken marriages, and poverty are the norm, and luck is unusual. So when Miguel Torres notices an advertisement for a position looking after two small boys a few towns over, he jumps at the opportunity.
Rachel Rothstein is not the sort of parent Miguel expected to be working for, though. A frustrated artist, Rachel moved her family away from New York looking for a fresh start, but so far New Mexico has not solved any of the problems they brought with them. But Miguel genuinely loves the work and he finds many of the Rothstein family's customs similar to ones he sees in his own community.
Studded throughout this present-day narrative are historical vignettes following the ancestors of Entrada's residents, beginning in fifteenth-century Spain and moving forward to the discovery of America, highlighting the torture, pursuit, and resistance of the Jewish people throughout history, leading to the founding of the enclave that Miguel now calls home. A beautiful novel of shared history, Gateway to the Moon is a moving and memorable portrait of home and community.

Gateway to the Moon by Mary Morris
My rating: 4 of 5 stars

Gateway to the Moon is a 2018 Doubleday publication.

A dark, but rich and fascinating family history-

This novel spans continents and centuries in time to tell the story of Entrada de la Luna, a four-hundred -year old town located in New Mexico. The residents often perform rituals handed down through the generations, but do not understand their origins. The author adeptly connects the past with the present in an incredible family saga, as wrenching as it is fascinating and poignant- almost bittersweet.

In 1492, Luis de Torres, who was forced to convert from Judaism to Catholicism during the Spanish Inquisition, leaves his family to set sail with Christopher Columbus. His travels are the beginning of a journey, we will follow along with, as he and his future offspring settles into this new land.

The time line alternates between ancient history, and 1992, where we meet fourteen-year-old Miguel, a young man who has keen interest in astronomy, and could have a bright future, but feels trapped by a lack of opportunity and poverty. His aunt Elena is a former ballerina who got out of Entrada de la Luna, and has a very good reason to stay out, but she also has a deep-seated need to return to her family and this small community.

I’m ashamed to admit, I don’t know much about the Spanish Inquisition. I hear it referenced from time to time without really stopping to reflect on it, and I studied it some in school, of course, but that was a long, long, long time ago. So, reading this book was quite a learning experience for me. I was unaware of the ‘Conversos’ or ‘Crypto’ Jews, or that they continued to practice the rituals, traditions, and customs of the Jewish faith, without understanding the significance of them. It was just something they had always done, passed down through the generations. The author explains how and why this happened, in striking and vivid details, some of which are very uncomfortable to read, but necessary all the same.

The family connections linked to the historical parts of this story is so fascinating, as Miguel’s lineage is eventually traced to him and his small hometown, in present day, 1992. The various character studies will take the reader into a deeper dimension and contrasts well with chapters detailing the ancient history leading us through various good and bad times for the Jewish people.

This is very eye-opening, enlightening novel, with a few stunning revelations that leave the door open for Miguel to view his life from an entirely different perspective. The writing is beautiful and exceptional. This is a novel that will certainly have a lasting and haunting effect on me. 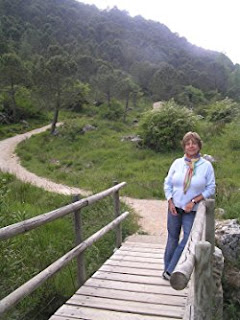 I was born in Chicago and, though I have lived in New York for many years, my roots are still in the Midwest and many of my stories are set there. As a writer my closest influences are Willa Cather and F. Scott Fitzgerald. I travel as much as I can and travel fuels everything I do. When I travel, I keep extensive journals which are handwritten and include watercolors, collage as well as text. All my writing begins in these journals. I tend to move between fiction and nonfiction. I spent seventeen years working on my last novel, The Jazz Palace. I think I learned a lot writing that book because the next one only took three years., Gateway to the Moon. Gateway which will be out in March 2018 is historical fiction about the secret Jews of New Mexico. I am also working on my fifth travel memoir about my travels alone. This one is about looking for tigers.
Posted by gpangel at 1:00 AM