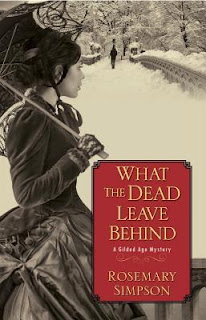 WHAT THE DEAD LEAVE BEHIND:

Set amidst the opulent mansions and cobblestone streets of Old New York, this enthralling historical mystery by Rosemary Simpson brings the Gilded Age to life in a tantalizing tale of old money, new love, and grave suspicion . . .
As the Great Blizzard of 1888 cripples the vast machinery that is New York City, heiress Prudence MacKenzie sits anxiously within her palatial Fifth Avenue home waiting for her fiance s safe return. But the fearsome storm rages through the night. With daylight, more than two hundred people are found to have perished in the icy winds and treacherous snowdrifts. Among them is Prudence s fiance his body frozen, his head crushed by a heavy branch, his fingers clutching a single playing card, the ace of spades . . .
Close on the heels of her father s untimely demise, Prudence is convinced Charles s death was no accident. The ace of spades was a code he shared with his school friend, Geoffrey Hunter, a former Pinkerton agent and attorney from the South and a former Pinkerton agent. Wary of sinister forces closing in on her, Prudence turns to Geoffrey as her only hope in solving a murder not all believe in and to help protect her inheritance from a stepmother who seems more interested in the family fortune than Prudence s wellbeing . . .
Filled with richly colorful characters, fascinating historical details, and thrilling moments of suspense, What the Dead Leave Behind is an exquisitely crafted mystery for the ages.
READ AN EXCERPT:

What the Dead Leave Behind by Rosemary Simpson
My rating: 4 of 5 stars

What the Dead Leave Behind by Rosemary Simpson is a 2017 Kensington Publication.

When a record breaking spring blizzard hits New York, Prudence Mackenzie’s fiancé, Charles, was one the weather’s casualties, or so it would seem. His death, upends Prudence entire future, as the provisions and dictates in her father’s carefully worded last will and testament, which depended upon Prudence’s marriage to Charles, became null and void. This puts Prudence in a very awkward and vulnerable situation- as well a dangerous one.

Convinced that Charles met with foul play, Prudence seeks advice from Charles's best friend, Geoffrey Hunter, a former Pinkerton agent, to help her root out the truth. But, Prudence soon finds herself in the midst of a diabolical plot where her very sanity is at stake. Can she prove Charles was murdered, protect her inheritance and overcome her own personal demons before it is too late?

This first book in the “Gilded Age Mystery Series’, sets the stage for what should be a fascinating series. Set in the Gilded Age, where women were very much at the mercy of men, Prudence exhibits a great deal of grit and pluck, circumventing traditional female roles quite cleverly. She is a most interesting amateur sleuth, coping with a malady that takes great will power to control. While this was a bigger issue than many know, during this era, the mention of Prudence’s struggles, while a big part of the story, it is at times given more prominence than the mystery. I am interested to know if this will be an ongoing battle in future installments, though.

Other than that, the historical details are quite vivid,detailing the great blizzard of 1888, and the atmosphere is thick with sinister tension. The irony of the how everything comes together in the end is well played. The whodunit is quite apparent, as is the motive, but this doesn’t in any way hamper the suspense. The danger is palpable and builds to a taut crescendo!! This is definitely my kind of historical crime novel!!

The foundation is neatly set and will leave readers as eager for the next installment as I am! 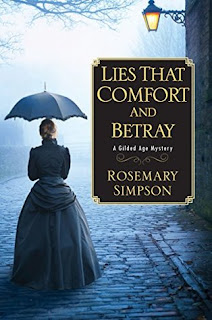 
Heiress Prudence MacKenzie is a valuable partner to attorney Geoffrey Hunter, despite the fact that women are not admitted to the bar in New York’s Gilded Age. And though their office is a comfortable distance from the violence that haunts the city’s slums, the firm of Hunter and MacKenzie is about to come dangerously close to an unstoppable killer . . .
LIES THAT COMFORT AND BETRAY The murders in Whitechapel are shocking enough to make news worldwide, and in the autumn of 1888, Geoffrey and Prudence find the stories in the New York Herald quite unsettling. But London is not the only city to be terrorized by a mad butcher. Nora Kenny makes the occasional journey on the Staten Island ferry to work in Prudence’s Fifth Avenue house, just as her mother once served Prudence’s mother. As little girls, they played freely together, before retreating into their respective social classes. Still, they remain fond of each other. But when Nora slips away to Saint Anselm’s one chilly Saturday to confess her sins and never returns, Prudence is alarmed. And when Nora’s body is discovered in a local park, Prudence is devastated. Nora will not be the only young woman to fall victim, but the police are uncertain what they are dealing with. Has the Ripper sailed across the Atlantic to find a new hunting ground? Is some disturbed soul copying his crimes? A former Pinkerton agent, Geoffrey intends to step in where the New York Metropolitan Police seem to be failing, and Prudence is just as determined to protect the poor, vulnerable females being targeted. But a killer with a disordered mind and an incomprehensible motive may prove too elusive for even this experienced pair to outwit. From the author of What the Dead Leave Behind, this is a suspenseful and richly atmospheric mystery that captures both the elegance and sophistication of nineteenth-century New York, and the secrets and bloody terrors that lurked behind its gilded facades.

Lies That Comfort and Betray by Rosemary Simpson
My rating: 4 of 5 stars

Lies That Comfort and Betray by Rosemary Simpson is a 2018 Kensington publication.

The first book in this new series set a solid foundation to be built upon. But, did the second book take advantage of that momentum?

This is an excellent follow up to ‘What the Dead Leave Behind’. With Jack the Ripper terrorizing London, New York finds it is not immune to the same depravity. When Nora Kenny, a young woman who works for Prudence, is brutally murdered, the prospect of JTR having crossed the pond is not a pleasant one, nor is the idea that New York is dealing with a copycat killer. But, the police immediately arrest Nora’s fiancé, a man Prudence is sure is innocent. With the help of Geoffrey, the law firm of Hunter and MacKenzie begin a harrowing murder investigation, hoping to discover the real killer before he strikes again.

This installment deals with a host of feminine related double standards prevalent in the gilded age. The dangers of back alley abortions, the stigma of premarital sex, and pregnancy out of wedlock are all explored, as well as a little tippy toeing around religion and a few blatant hypocrisies. Prudence still battles her own demons, but they do not take center stage, this time around. Instead, Prudence channels her energy and thoughts into her work.

Prudence and Geoffrey make a terrific team and I was happy to see the way their characters are developing. But, at the end of the day, the real test is how challenging the mystery was for me and if it kept my attention, if it was suspenseful, atmospheric, and if it kept me guessing. I’m happy to report that this novel passed the test in all categories!

While this is a part of a series, it can still be read as a stand alone- however, to get Prudence’s full background, and how she came to be partnered with Geoffrey, reading the first installment will certainly enhance your enjoyment of this second one.

Overall, I am a very happy customer and am eagerly awaiting the third book in this promising series. 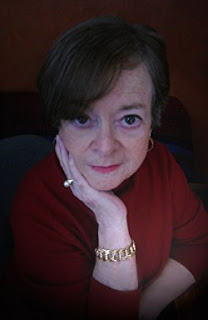 WHAT THE DEAD LEAVE BEHIND (available April 25, 2017) is the first mystery in a series set in Gilded Age New York City. It begins with one of many deaths in the Great Blizzard of 1888 and ends with the promise of a uniquely independent future for its wealthy and unconventional heroine. Real life historical figures lend authenticity and a sense of familiarity to this bygone era of extravagant wealth and widespread political corruption. The second volume, LIES THAT COMFORT AND BETRAY, (available January 2018) takes protagonists Prudence MacKenzie and ex-Pinkerton Geoffrey Hunter deeper into the underworld that lies beneath society's glittering façade.