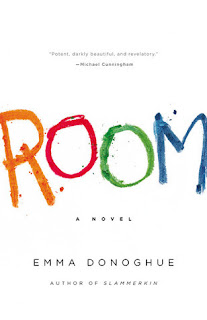 To five-year-old Jack, Room is the entire world. It is where he was born and grew up; it's where he lives with his Ma as they learn and read and eat and sleep and play. At night, his Ma shuts him safely in the wardrobe, where he is meant to be asleep when Old Nick visits.
Room is home to Jack, but to Ma, it is the prison where Old Nick has held her captive for seven years. Through determination, ingenuity, and fierce motherly love, Ma has created a life for Jack. But she knows it's not enough...not for her or for him. She devises a bold escape plan, one that relies on her young son's bravery and a lot of luck. What she does not realize is just how unprepared she is for the plan to actually work.
Told entirely in the language of the energetic, pragmatic five-year-old Jack, ROOM is a celebration of resilience and the limitless bond between parent and child, a brilliantly executed novel about what it means to journey from one world to another.

Room by Emma Donoghue is a 2010 Little, Brown and Company publication.

When this book was first released and the buzz began circulating, I snapped it up, eager to see what the fuss was about. However, each time I intended to start reading it, I would talk myself out of it, due to the tense atmosphere of the book, and the inevitable emotional response, that would result from it. I’m not one to shrink from dark subject matter, but I never felt up for something this heavy and kept putting the book aside.

So, now, nearly six years later, with a movie based on it, the lead actress having won an academy award for her role, I’ve determined it was time to suck it up and read this novel, which has garnered so many awards and accolades, and is a commercial and critical success.

The story started off much the way I imagined it would. Ma and Jack being held captive in a room, with no way of escape. The story is told from the perspective of five year old Jack, and this initially threw me, because of how he named objects in the room, and his speech patterns. But, I soon adjusted and began absorbing the stark living conditions they survived in, and of course the abuse Ma was subjected to. Yes, this is very difficult to read, and is very disturbing, mostly because there is a precious child involved. But, I realized right away, that Ma, did whatever was necessary to protect him and knew if they were ever to escape they would have to take a huge risk. What choice did they have?

This portion, of the book ends quicker than I thought it would, thank goodness, with the remainder of the story centered around the aftermath. At this point I expected the writing to firm up and the conversations to become more normal, since the first person narrative switches over, for the most part, to more of a third person narrative.

However, the dialogue was stilted and kept its emotional distance from the reader. That being said, I did like how the author approached Jack’s character. He is, as many young children are, quite resilient, but his confusion leapt off the page. He wanted to understand, loved being free, but his adjustment was more difficult than it appeared on the surface. Still, he has a wisdom beyond his years, and is absolutely adorable.

I also admired, Ma, who loved that child, no matter what the circumstances. However, she does a few things that left me scratching my head, but after all those years in captivity, I thought her mental health was surprisingly strong. I loved her Q&A with the press, most of all, and thought her lack of self pity admirable, but of course she is much more fragile that I initially thought. I know she made some controversial decisions and there were a few missteps, but overall she is worthy of great respect.

The secondary characters, seemed to barely reach the surface as though they were only in my peripheral vision. They are understanding, and as helpful as possible, but often couldn’t grasp the nightmare Jack and Ma have survived, while others can’t cope at all, which could have made for some very interesting characterizations if they had been fleshed out more.


Still, at the end of the day, this story is certainly haunting, and the characters did hang around in my head for some time. The story is moving and touching in the end, and I can’t say how much I appreciate the author’s portrait of the mother and child bond, which is unshakable, and is what stands out for me more than anything else. I fell in love with Jack, and feel like we have left him a good place in quite capable hands. I would love to have an update on him, because I believe he may become a remarkable man someday.

I did eventually watch the movie, and it was very well done, and a great representation of this book.  After ruminating on this book long after having written this review, I think it really deserved all the kudos and accolades. 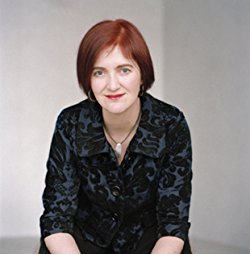 Born in Dublin in 1969, Emma Donoghue is a writer of contemporary and historical fiction whose novels include the international bestseller "Room" (her screen adaptation was nominated for four Oscars), "Frog Music", "Slammerkin," "The Sealed Letter," "Landing," "Life Mask," "Hood," and "Stirfry." Her story collections are "Astray", "The Woman Who Gave Birth to Rabbits," "Kissing the Witch," and "Touchy Subjects." She also writes literary history, and plays for stage and radio. She lives in London, Ontario, with her partner and their two children.
Posted by gpangel at 1:00 AM