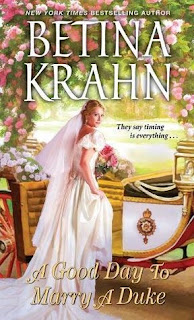 From award-winning New York Times bestselling author Betina Krahn comes a beguiling new romance brimming with her signature wit, timeless sensuality, and thrilling romance—as desire proves to be a great equalizer...
Daisy Bumgarten isn't thrilled to be trying to catch a duke's attention while dressed like a flower pot caught in a swarm of butterflies. But, after all, when in Rome (or in this case London society)... Since her decidedly disastrous debut among New York's privileged set, the sassy Nevada spitfire's last chance to "marry well" lies across the pond, here in England. If she must restrain her free spirit, not to mention her rib cage, so be it. She knows she owes it to her three younger sisters to succeed.
Now, under a countess's tutelage, Daisy appears the perfect duchess-in-training...Until notorious ladies' man Lord Ashton Graham, a distraction of the most dangerous kind, glimpses her mischievous smile and feisty nature—and attempts to unmask her motives. Daisy has encountered snakes on the range, but one dressed to the nines in an English drawing room is positively unnerving—and maddeningly seductive. When a veiled plot emerges to show up Daisy as unworthy of the aristocracy, will Ashton be her worst detractor? Or the nobleman she needs most of all?

A Good Day to Marry a Duke by Betina Krahn
My rating: 4 of 5 stars

A Good Day to Marry a Duke by Betina Krahn is a 2017 Kensington publication.

After being shunned by the old money society in the United States, nouveau riche debutante, Daisy Bumgarten is trying her luck in England. She is determined to make her mother proud, by marrying a duke, thus assuring her sisters will also make their way into the upper crust of society. However, Daisy’s motives are a little too obvious, a situation that is fortuitous to unabashed ladies' man, Lord Ashton Graham. Commissioned to ruin Daisy so that she can not marry his brother, Ashton does everything in his power to talk her out of it, but before long, he finds himself helping her prove her lineage is proper enough for London society. He also finds the brash American compelling and very smart, but also confused by her frank desires, which women aren’t supposed to enjoy. Before he knows it, he is in direct competition with his own brother, each hoping for a future with the vivacious American.

Will Daisy marry for duty, for the future of her sisters, or will she marry for love?

This is an enjoyable historical romance, which centers around the real life ‘dollar princesses’ who traveled from America to England, loaded with money, hoping to marry into the aristocracy for the sake of a title. This worked wonderfully for some entitled gentlemen who were in desperate need of funds. While the author notes several true- life examples, none of them turned out to be love matches, but this story has a much happier outcome.

There were a few moments at the beginning of the book that made me cringe a little, -well, actually, it bothered me a lot, since Ashton’s behavior mimics the type of advances and inappropriate touching, women have had enough of, and Daisy’s reaction was confusing to me. But, as I read on, I realized the author was trying to put a strong emphasis on the double standard society imposed on women when it comes to enjoying sexual intimacy. Daisy has a healthy appetite and loves the company of men, but is made to feel as though her desires and needs are sinful… you know- close your eyes and think of England- UGH! Women were made to feel as though it was a duty, nothing more. Daisy really struggles to keep her desires under control, but Lord Ashton is temptation on a stick.

Daisy is a delightful character, willing to sacrifice her own happiness for the sake of her family. Ashton was taken with Daisy right from the start, and genuinely felt bereaved that such a wonderful woman would have her vitality squashed by the excessive demands placed on her by marrying a duke, and that his rather introverted brother wouldn’t know how to appreciate someone as amorous as Daisy. Still, he has nothing to offer her, and the title is what she is determined to have, which leaves the notorious bad boy with a heartbreaking case of unrequited love.

I enjoyed this nice, light hearted, romantic romp. I have a couple books on my shelf by this author, but I never got around to reading them. So, although, Ms. Krahn has an impressive library of published works, this is my first impression of her.

Not only will I be returning for more ‘Sin and Sensibility’, but I think I’ll pull out those older books that have been languishing on my shelves and become more acquainted with this author. 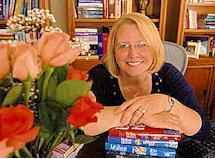 Krahn, born Betina Maynard, is the second daughter of Dors Maynard and Regina Triplett. Krahn learned to read at the age of four, and began making up her own stories when she was only six. In fifth grade she won a silver "Noble Order of Bookworms" pin for her achievements in reading, and the following year she began writing down her stories.Krane was graduated from high school in Newark, Ohio and received a B.S. in Education (Biological Sciences) at Ohio State University. After college, Krahn taught science in Newark, and studied for a graduate degree at Ohio State in the summers. It was during those summers that she met her future husband, physics graduate student Donald Krahn.The family moved to Oklahoma, where Krahn finished the work for her Masters of Education in Counseling in 1973. In 1974, she gave birth to her first child, Nathan, with the second son Zebulun arriving in 1978. With two young children, Krahn became a stay-at-home mother for a time, also finding time to volunteer on a community board working to get funding for mental health care in part of Western Oklahoma. Once the funding was secured, Krahn worked as an HR director for a mental health center.
Posted by gpangel at 1:00 AM