TRUE CRIME THURSDAY: The Phantom Killer: Unlocking the Mystery of the Texarkana Serial Murders:The Story of a Town in Terror- by James Presley- Feature and Review 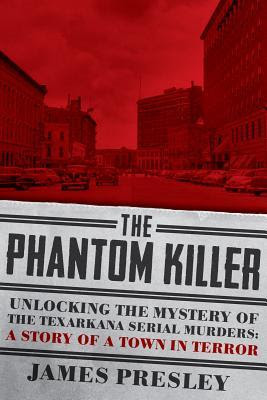 The salacious and scandalous murders of a series of couples on Texarkana's "lovers lanes" in seemingly idyllic post-WWII America created a media maelstrom and cast a pall of fear over an entire region. What is even more surprising is that the case has remained cold for decades. Combining archival research and investigative journalism, Pulitzer Prize nominated historian James Presley reveals evidence that provides crucial keys to unlocking this decades-old puzzle.
Dubbed "the Phantom murders" by the press, these grisly crimes took place in an America before dial telephones, DNA science, and criminal profiling. Even pre-television, print and radio media stirred emotions to a fever pitch. The Phantom Killer, exhaustively researched, is the only definitive nonfiction book on the case, and includes details from an unpublished account by a survivor, and rare, never-before-published photographs.
Although the case lives on today on television, the Internet, a revived fictional movie and even an off-Broadway play, with so much of the investigation shrouded in mystery since 1946, rumors and fractured facts have distorted the reality. Now, for the first time, a careful examination of the archival record, personal interviews, and stubborn fact checking come together to produce new insights and revelations on the old slayings.

The Phantom Killer: Unlocking the Mystery of the Texarkana Serial Murders: The Story of a Town in Terror by James Presley
My rating: 4 of 5 stars

The Phantom Killer- Unlocking the Mystery of the Texarkana Serial Murders: The Story of a Town in Terror by James Presley is a 2015 Pegasus Books LLC publication.

This case has been the subject of much speculation over the years. Officially, it remains an unsolved mystery, but in this book, James Presley builds a case against the prime suspect which left me feeling, at least in my mind, as though the case was finally solved.

In 1946, the term “serial killer” wasn't on the tips of everyone's tongue like it is today. While there were multiple killings in this case, I'm wondering if “spree killer” might not be a more apt description. Nevertheless, this type of crime was practically unheard of, especially in the small boom town of Texarkana, a city with the unique notoriety of being placed between the borders of both Texas and Arkansas. Yes, there is an Arkansas side and a Texas side. Otherwise, there was nothing especially remarkable about Texarkana, but this case put it “on the map” so to speak.

The first vicious attack on a dark, isolated lover's lane is the stuff horror movie legends are made of. Two young people parking are approached by a gunman wearing a hood or mask and brutally attacked. The couple miraculously survived, but law enforcement had a nearly blasé sort of attitude about the crime. However, when another attack occurs, and this time the victims are murdered, the case took on a whole new dimension and law enforcement sat up and took notice and then... another attack took place.

The first part of the book which outlines details of the crime spree was riveting. It will make the hair stand up on the back of your neck. Random shootings and attacks like these, where there doesn't appear to be any kind of personal motive or pattern, is one of the most difficult to process and understand and it's hard to pinpoint who is responsible.

The atmosphere in the town of Texarkana was nearly one of mass hysteria and the media wasted no time hyping the story making the situation even more tense.

But, once the book moves past the initial shock of the murders themselves and the author begins to make a case for one particular person who most likely had an accomplice, the pace of the book slows down to crawl. This part is pretty dry reading despite the fact I thought the author had the killer pegged.

The book comes with a set of photographs which gives faces to names and lets us know what happened to all the people involved, either as victims or officers in the case. 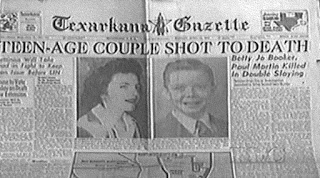 The book also, of course, reminds us that the movie “The Town that Dreaded Sundown” was loosely based on this crime, and I do mean loosely. The crime, the publicity, the movie and TV true crime shows have all left Texarkana with a bit of notoriety it might not have otherwise and there are people there today who are still attempting to cash in on that fifteen minutes of fame, some of which I found to be in poor taste. 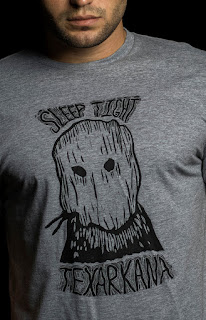 Overall, the author did a great job of laying out the crime, the era of time, the aftermath and the investigation. He went into great detail in making his case and had me convinced, without a doubt, that the man he fingered was in fact “The Phantom Killer”. The book is well researched and thought out, and even though the book was a little dull in places, it accomplishes it's goal. I am so glad someone has written a book about this crime and put to rest that awful image people have due to the Hollywood version of events. If you want to know what really happened, read this book. 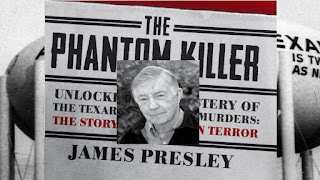 James Presley ​has a Ph.D. in history from the University of Texas and has won numerous awards for his journalism, including the Anson Jones Award and the John H. McGinnis Memorial Award.  He is the author of ​A Saga of Wealth: The Rise of the Texas Oilmen, which was nominated for a Pulitzer Prize.  He lives in Texarkana, Texas.
Posted by gpangel at 1:00 AM