TRUE CRIME THURSDAY: Identity Crisis: The Murder, The Mystery, and the Missing DNA- by Jefferson Bass- Feature and Review 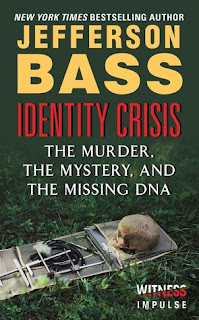 Renowned forensic anthropologist Bill Bass—founder of the Body Farm—tackles one of his most baffling cases ever in this real-life spellbinder
In 1978, 56-year-old Leoma Patterson left a bar in Clinton, Tennessee, and was never seen again. Six months later, a female skeleton was found on a wooded lakeshore in a neighboring county. The bones were consistent with those of the missing woman, and one of Patterson's daughters recognized a ring found at the death scene as her mother's. The bones were buried, and six years later, a relative of Patterson's—one of the men she was last seen alive with—confessed to killing her. Case closed.
But the tentative identification—made years before DNA testing was available to confirm it—failed to convince some of Patterson's relatives. And so it was that in 2005 Dr. Bass found himself winding around hairpin curves to the mountainside grave, where he would unearth the disputed remains and collect DNA samples. The forensic twists and turns that followed would test the limits of DNA technology … and of Dr. Bass's half-century of forensic knowledge.

Identity Crisis: The Murder, the Mystery, and the Missing DNA by Jefferson Bass
My rating: 4 of 5 stars

Identity Crisis: The Murder, The Mystery, and the Missing DNA by Jefferson Bass is a 2015 Witness Impulse publication.

This is a fascinating true story that follows a puzzling case in which a family in Tennessee is uncertain if their grandmother, who was allegedly murdered, was properly identified. After an exhumation, DNA analysis came back with shocking results, which led to a facial reconstruction, and even more DNA work, which only brought with it more questions than answers.

This story chronicles the saga that took over two years of forensic testing, with either puzzling results or no results, but that finally, with an incredible stroke of luck, put an end to the lingering doubts this family had about whether or not the woman buried under the name of Leoma Patterson was actually her. It was a long, tedious process which shows how television dramas can lead the public to expect miracles where none exist. In this case things worked out and the family is satisfied they got the correct answers. However, it took years of ups and downs and many disappointments along the way before the case was finally put to rest, so to speak.

While the book is only a little over a hundred pages in length, there were some moments when the author got a little off topic. Maybe a little bit of an information dump or 'filler'.

However, the details of how all this came about was very interesting and absorbing. The facial reconstruction was probably the most interesting of all the forensic sciences that were employed in this case. It's incredible when you think about it, even if DNA and forensics don't always hold all the pieces to a puzzle, it has come a long way in a short time and is a huge help in crime solving, even if it takes a little bit longer than 45 minutes to wrap up a case. 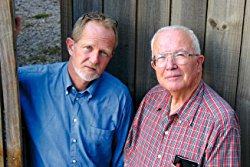 Jefferson Bass is the writing team of Dr. Bill Bass and Jon Jefferson. Together, they wrote Death's Acre, a nonfiction account of the Body Farm, before tackling forensic under the pen name of Jefferson Bass. Their debut novel, Carved in Bone, reached # 25 on The New York Times Best Seller list and was followed by Flesh and Bone, The Devil's Bones, and a second nonfiction title, Beyond the Body Farm. Of the six Body Farm novels already in print, five have been New York Times bestsellers. Their seventh novel, "The Inquisitor's Key," comes out May 8, 2012.Jefferson and Bass bring their own unique set of strengths to the partnership. Dr. Bass, the duo’s scientific expert, is a legend in forensic circles. In 1980 he created the world's first laboratory devoted to human decomposition: the University of Tennessee's "Body Farm." Dr. Bass has authored or coauthored more than 200 scientific publications, most of them based on the research facility's work. During half a century in the classroom, Dr. Bass taught tens of thousands of students, including many of the foremost forensic anthropologists practicing in the United States today. He's been featured on numerous network television news programs, as well as in documentaries for National Geographic and the BBC. CBS was not exaggerating when it called Dr. Bass "America 's top forensic scientist."Jon Jefferson, the “writer” half of Jefferson Bass, is a veteran journalist, science writer, and documentary filmmaker. His journalism credits include work for The New York Times, National Public Radio, Newsweek, and USA Today. Jefferson learned the art of combining scientific material with compelling human stories during a decade as a science writer at Oak Ridge National Laboratory. In the 1990s he began writing and producing television documentaries, mainly for the History Channel and the Arts and Entertainment Network, covering topics ranging from World War II fighter planes to ancient art treasures at the Vatican. While making a two-hour A&E special about the Vatican in 1998, Jefferson first visited Avignon; thirteen years later, he returned to Avignon to research the richly layered new Body Farm novel, The Inquisitor’s Key. The Jefferson-Bass collaboration began in 2001, when Jefferson wrote and produced two National Geographic documentaries about the Body Farm—films that earned high rating around the world. The rest, as they say, is history—or, in this case, memoir and crime fiction!