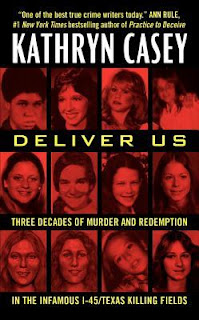 Over a three-decade span, more than twenty women—many teenagers—died mysteriously in the small towns bordering Interstate 45, a fifty-mile stretch of highway running from Houston to Galveston. The victims were strangled, shot, or savagely beaten. Six met their demise in pairs. They had one thing in common: being in the wrong place at the wrong time.

The day she vanished, Colette Wilson waited for her mother after band practice. Best friends Debbie Ackerman and Maria Johnson loved to surf and were last seen hitchhiking. Laura Kate Smither dreamed of becoming a ballerina and disappeared just weeks before her thirteenth birthday.

In this harrowing true crime exposition, award-winning journalist Kathryn Casey tracks these tragic cases, investigates the evidence, interviews the suspects, and pulls back the cloak of secrecy in search of elusive answers.

Deliver Us: Three Decades of Murder and Redemption in the Infamous I-45/Texas Killing Fields by Kathryn Casey
My rating: 5 of 5 stars

Deliver Us: Three Decades of Murder and Redemption in the Infamous I-45/Texas Killing Fields by Kathryn Casey is a 2015 Avon/Harper publication.

My family has traveled down portions of I-45 many, many times here in Texas, as do so many others here do. It's a long stretch of road approximately 285 miles in length, connecting Dallas and Houston. The I-45 murders have been discussed quite often amongst Texans and has been the subject of documentaries, books, news magazine programs such as "48 Hours Mystery",and there was even a movie made over the killings.

In the early 1970's the first of the killings began. All through that decade the bodies of mainly young women were discovered brutally murdered. Along the way one man was tried and convicted of the murders of two of the women, but over the years his guilt has been called into serious question which has many believing the man was wrongfully convicted.

But, as the seventies came to an end the horrifying truth was the killings were far from over. The eighties ushered in a new decade of death along the I-45 interstate. It was at this time Fred Paige, a cop and investigator became convinced he knew who the killer was. His investigations was very detailed and the suspect certainly fit the profile and many things he confessed to did fit the crime scenes.

But as we headed into the nineties the grim discovery of the 'The Killing Fields' shows the killings have never stopped or even slowed down. However, as the decade drew to a close, the dawning of forensics, DNA matches, and CODIS will finally provide at least one family with justice.

As we catch up to the present, a viable suspect sits in prison but it's not clear if he is one of the killers or not. At this time there in still insufficient evidence to prosecute.

The author goes on to remind us that serial killers are not only along this 285 mile stretch of interstate travel, but everywhere.. Long Island being the area most prominently featured in the news media recently, along with the shocking discovery of women being held hostage for over a decade in Ohio, just to name a few. Yet, it can not be denied that the number of murders along I-45 are staggering.

The author did an outstanding job of bringing the victims to life, so that the reader could feel the loss their families suffered, as well as introducing us to those hard working investigators who never forgot the victims and worked tirelessly to find answers. The portrait of the suspects throughout the decades will leave you feeling sick and the fact that only a few convictions in these cases were ever won was disheartening.

This book is a harrowing read and not for the faint of heart. The violence is described as it really happened and often suspects have engaged in horrific and vile acts. The families who agreed to speak with the author also reminds us of how their lives will never ever be the same, they will never recover. For some there were at least some answers, they know if their loved one is alive or dead, they were able to bury them, even if they don't know who took them away from them. Others live in that special hell of not knowing, living in limbo, of having no closure of any kind. My heart ached for these families. As a parent I can only imagine the nightmare of having a missing or murdered child. So, tonight hug your kids a little longer, a little tighter, make sure they know the dangers out there and teach them to protect themselves as best they can. This book stands as a reminder that evil lurks out there in the shadows and it left me a heavy feeling of unease. This is not a book you want to read in the dead of night. 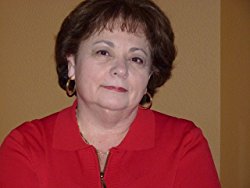 A novelist and an award-winning journalist, Kathryn Casey is the creator of the Sarah Armstrong mystery series and the author of eight highly acclaimed true crime books. Her first novel, SINGULARITY, was one of Booklist’s best crime novel debuts of 2009, and Library Journal chose the third, THE KILLING STORM, as one of the best books of 2010. In both books Casey’s protagonist is a Texas Ranger/profiler headquartered in Company A. Her latest true crime book, DELIVER US, investigates the I-45/Texas Killing Field murders. Kathryn Casey has appeared on Oprah, Oprah Winfrey's Oxygen Network, Court TV, Biography, Nancy Grace, E! Network, TruTv, Investigation Discovery, The Travel Channel and A&E. She’s written for Rolling Stone, TV Guide, Reader’s Digest, Texas Monthly, MORE, Ladies’ Home Journal, and many other publications. Ann Rule calls Casey “one of the best in the true crime genre.” For more information: www.kathryncasey.com
Posted by gpangel at 1:00 AM