MONDAY'S MUSICAL MOMENTS: The Queen of Bebop: The Musical Lives of Sarah Vaughn by Elaine M. Hayes- Feature and Review 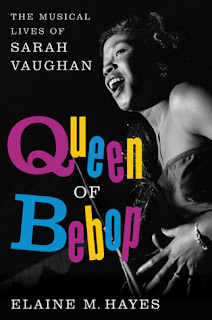 Queen of Bebop brilliantly chronicles the life of jazz singer Sarah Vaughan, one of the most influential and innovative musicians of the twentieth centuryand a pioneer of women s and civil rights
Sarah Vaughan, a pivotal figure in the formation of bebop, influenced a broad array of singers who followed in her wake, yet the breadth and depth of her impact not just as an artist, but also as an African-American woman remain overlooked.
Drawing from a wealth of sources as well as on exclusive interviews with Vaughan s friends and former colleagues, Queen of Bebop unravels the many myths and misunderstandings that have surrounded Vaughan while offering insights into this notoriously private woman, her creative process, and, ultimately, her genius. Hayes deftly traces the influence that Vaughan s singing had on the perception and appreciation of vocalists not to mention women in jazz. She reveals how, in the late 1940s and early 1950s, Vaughan helped desegregate American airwaves, opening doors for future African-American artists seeking mainstream success, while also setting the stage for the civil rights activism of the 1960s and 1970s.She follows Vaughan from her hometown of Newark, New Jersey, and her first performances at the Apollo, to the Waldorf Astoria and on to the world stage, breathing life into a thrilling time in American music nearly lost to us today.
Equal parts biography, criticism, and good old-fashioned American success story, Queen of Bebop is the definitive biography of a hugely influential artist. This absorbing and sensitive treatment of a singular personality updates and corrects the historical record on Vaughan and elevates her status as a jazz great.

Queen of Bebop: The Musical Lives of Sarah Vaughan by Elaine M. Hayes
My rating: 4 of 5 stars

The Queen of Bebop: The Musical Lives of Sarah Vaughn by Elaine M. Hayes is a 2017 Ecco publication.


Bebop or bop is a style of jazz developed in the early to mid-1940s in the United States, which features songs characterized by a fast tempo, complex chord progressions with rapid chord changes and numerous changes of key, instrumental virtuosity, and improvisation based on a combination of harmonic structure, the use of scales and occasional references to the melody.

Since starting my ‘Monday Musical Moments’ feature at ‘The Book Review’, I’ve read my share of musical memoirs and biographies. After a while I became a little wary of them for a plethora of reasons, but I also learned a lot about the way biographies are constructed. I’ve learned the difference between authorized and unauthorized and all the various ways biographers approach their subjects. Invariably, they tend to go in definite directions, either by exploring the artist’s musical achievements or by delving into their personal life. Some biographers, and think this is one of them, will choose a theme, and center the book around it. If you want a small clue as to which way the biographer will go, pay very close attention to all the words in the title. Sometimes, I can glean from that, what the author will emphasize the most.

In this case, “The Musical Lives of Sarah Vaughn” is a huge giveaway. I was right in assuming the book would mainly focus on Vaughn’s musical abilities, with a smattering of personal information and history rounding things out.

I am not in any way an aficionado on Vaughn’s music or life, but I have bumped into her a few times since becoming a huge fan of jazz. This book explores all the different ways Sarah reinvented herself during her long career. She had to succumb to pressure on occasion when the greedy recording labels sacrificed her talent by watering down her signature style, because for them, money is the bottom line, and so getting a popular hit was more important. We also get to meet Vaughn’s band members, and all recognizable musicians she worked with over the years, and examine the approach she took to living the life of a musician, especially on the road.

While the bulk of the book is centered around Sarah the singer, her personal life is not left out of the equation, by any means, it’s just not examined in minute detail or given the same amount of real estate. The reader gets the general idea, nonetheless. Vaughn's personal life was beset by poor choices in men, an increasing problem with drugs and alcohol, and she spent her life hoping to make her disapproving parents proud. But, Vaughn did always, somehow, manage to rebound, and continued to work, even during her fight with cancer, offering to sing while lying down in bed, if she had to.

I think this is a perfect book for someone who is unfamiliar with Sarah’s music or even if you are, you may only know her jazz tunes or her pop tunes or show tunes. This book will give you a fuller picture of Vaughn’s many musical incarnations. Her voice was an instrument few vocalists have the good fortune to possess. Vaughn was a natural talent with a very wide vocal range and perfect pitch, which is essential to jazz, especially bebop.

I really enjoyed the history related here and found the music business to be as frustrating then as it is now. I relished hearing about the jazz greats Vaughn worked with, the music she recorded, and the way Vaughn catered to her fans, always, always, giving the audience their money’s worth.


Vaughn’s personality does vibrate throughout the book, and it is easy to see how she got the nickname ‘Sassy’. She had a long, storied career, dealt with race discrimination, sexism, the recording industry, and a host of personal issues. But, at the end of the day, Sarah has gone down in history, as one of the best vocalists of all time. She won four Grammy’s and received many great honors, including singing at the White House.

If you have never listened to Sarah sing, I urge you to do so. I’m fond of her Jazz recordings, because they really show off her broad range and ability to shift octaves, pitches, and notes, all while improvising with the band. Vaughn had a HUGE voice- just beautiful.

This book does what it sets out to do, I think. The goal was to show Vaughn’s versatility, the way she was able to stay relevant and successful even when jazz took a back seat to rock music, in popularity. She could sing ANYTHING, even if the songs she had to record were not always the best representation of her talent. In fact, Vaughn’s voice would have been suited to Opera if she had had the chance to study it- although most agree Sarah would have felt stifled by its rules. 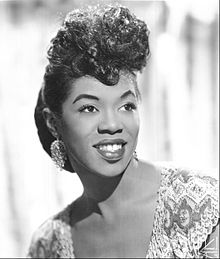 When reading a biography, it is very important, at least to me, for it to be organized and well researched. As I’ve said before, if someone has the time, inclination, a little writing talent, and extreme organizational skills, they can write a biography. But, it is obvious to me when a book is a gushing, ‘fan club’, sycophant job, where the subject can do no wrong, or when someone has simply pasted together interview segments, magazine articles, or album liner notes, hastily published for the sake of money. This book, however, is professionally done, very well written, an extremely organized and detailed accounting of Sarah musical life and career. It may take a more politic approach, but, I think if you understand going in that this book is about the music more than about Sarah’s personal life, you will enjoy it a lot more and appreciate the author's intentions. As most people tend to do, once I read a book like this one, it sparks a curiosity about the person behind the art, and I hope someone does satisfy the public demand for a more personalized portrait of Sarah Vaughn. But, until that time, this book is a terrific way to get to know more about Sarah’s music and might even turn you on to jazz, which I hope fervently that it does. But, beware, once you’ve been bitten by the bug, you’ll be a fan for life!!

But, you don’t have to be a Jazz enthusiast to enjoy her music, as Vaughn said herself: I’m not a jazz singer. I’m a singer. After you’ve read this book, you will know and understand exactly what Sarah meant by that. 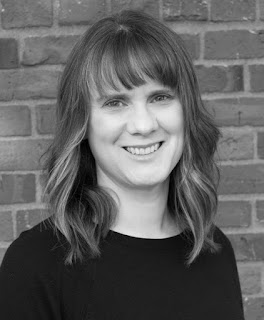 Elaine is a freelance writer and editor. She has written on topics ranging from competitive yoga to celebrity chefs and accounting. Her work appears in magazines, business communications, and on the web.

For more of Elaine's thoughts on Sarah Vaughn, women in entertainment, and music- jazz or otherwise, check out her blog- Lady Be Bop at http://elainemhayes.com/lady-be-bop/