The Lucky Ones by Tiffany Reisz- Feature and Review 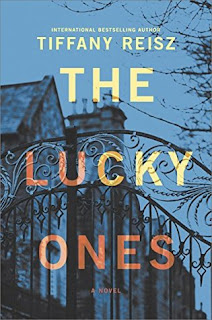 They called themselves “the lucky ones.” They were seven children either orphaned or abandoned by their parents and chosen by legendary philanthropist and brain surgeon Dr. Vincent Capello to live in The Dragon, his almost magical beach house on the Oregon Coast. Allison was the youngest of the lucky ones living an idyllic life with her newfound family…until the night she almost died, and was then whisked away from the house and her adopted family forever.
Now, thirteen years later, Allison receives a letter from Roland, Dr. Capello’s oldest son, warning her that their father is ill and in his final days. Allison determines she must go home again and confront the ghosts of her past. She's determined to find out what really happened that fateful night--was it an accident or, as she's always suspected, did one of her beloved family members try to kill her?
But digging into the past can reveal horrific truths, and when Allison pieces together the story of her life, she'll learns the terrible secret at the heart of the family she once loved but never really knew.
A vivid and suspenseful tale of family, grief, love—and the dark secrets that bind everything together—Tiffany Reisz’s latest is enthralling to the final page.

The Lucky Ones by Tiffany Reisz
My rating: 4 of 5 stars

The Lucky Ones by Tiffany Reisz is a 2018 Mira publication.

I’ve long since moved on from super steamy erotica, not that I read it all that often in the first place, but because of that, Tiffany Reisz was never on my radar, until I read her novel, ‘The Bourbon Thief”, which was my introduction to her work, and it totally blew me away. Since then, I’ve been waiting for a non-erotic novel by Reisz, so when I saw this one in the Overdrive library, I immediately placed a hold on it, months before it was due to be released. To add to my eagerness, this book has been labeled as ‘Gothic’, ‘Mystery’, and Romantic Suspense’, three of my very favorite genres.

But, I was completely unprepared for the direction this book took and never could have conceived where Reisz’s vivid imagination would take me.

There were seven children all taken in by famed doctor Vincent Capello, who owned an infamous beach house, with a storied past, he named ‘The Dragon’, located on the Oregon coast. All the children who were fortunate enough to be fostered or adopted by the good doctor were considered ‘The Lucky Ones”.

Allison was one of those lucky children, but a sinister accident in the house prompted her aunt to claim her, so Allison left ‘The Dragon’ and was never officially adopted by Dr. Capello. However, she never forgot her time with him or her special ‘siblings’. Thirteen years later, she finds her life at a crossroads, so when she gets a phone call explaining that Capello is gravely ill, Allison returns to the magical beach house to reunite with her 'brothers and sisters', and to face her murky past.

Well, this book certainly is suspenseful and most definitely has a chilling, atmospheric tone. There are Gothic elements in this story, but they run more towards a ‘Faulkner’s style of Gothic in some ways which could make some readers a little uncomfortable.

However, despite a few blurred lines, the story is constructed very well, and adeptly combines an odd concoction of genres. There is a very unsual love story, grotesqueries, medical experiments, and a high level of suspense, with a healthy dollop of psychological mind games. But, the story also touches on family ties, grief, and the experiences that bond people for a lifetime, for better or worse.

The mystery is compelling, the pacing is nearly pitch perfect, and the characterizations are so well drawn, I found myself immersed in their odd conversations and memories, waiting with bated breath as dark, lurid secrets revealed themselves. Oddly enough, Cooper McQueen, Allison’s former lover, almost steals the show, and despite the fact that he has let Allison down, he still made me smile and his brief appearances helped lighten some of the heavier moments.

This book may not be for everyone. There's some slightly irregular, borderline forbidden relationships that could give some readers pause, but it was, like I said, a pure Gothic tone, so this is not all that strange in this genre, even though I admit, it did make me squirm a little.

This is a dark novel, and is not in any way a traditional romantic suspense or mystery which is partly why I enjoyed this book. It's just so different from what I usually read, so it was more of a challenge. It did push the envelope a little, which also made me sit up and pay closer attention, nudging me out of my comfort zone, which is always a good thing to do on occasion. I had no clue which direction the story would take me and never could have figured out the plot twists in advance, which is another reason why it appealed to me. While I may not want to visit these dark recesses of the mind on an everyday basis, I must say, I am, once again, deeply impressed with this author. I love her writing style and her bold imagination! 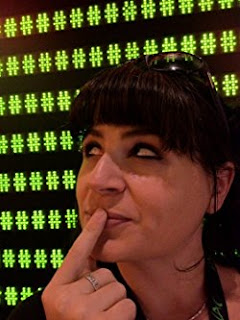 Tiffany Reisz lives in Lexington, Kentucky with her husband, author Andrew Shaffer.
If she couldn't write, she would die.
www.tiffanyreisz.com