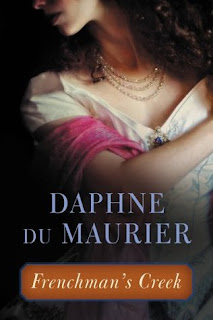 
Bored and restless in London's Restoration Court, Lady Dona escapes into the British countryside with her restlessness and thirst for adventure as her only guides.

Eventually Dona lands in remote Navron, looking for peace of mind in its solitary woods and hidden creeks. She finds the passion her spirit craves in the love of a daring French pirate who is being hunted by all of Cornwall.

Together, they embark upon a quest rife with danger and glory, one which bestows upon Dona the ultimate choice: sacrifice her lover to certain death or risk her own life to save him.

Frenchman's Creek by Daphne du Maurier
My rating: 4 of 5 stars

Frenchman’s Creek by Daphne du Maurier is a 2003 publication. (This novel was originally published in 1941)

Adventurous and unique side of Daphne du Maurier-

Bored in her marriage, Dona heads to her husband Harry’s estate in Cornwall for some time to herself. Right away, she becomes embroiled in the adventure of the pirate 'Jean-Benoit Aubéry.' She dares to let her true nature emerge, wearing men’s clothes, and joining in the intrigue and a little romance.

However, her fun is often foiled by Rockingham- a friend of her husband, who is determined to capture the pirates, while harboring designs on Dona of his own.

Meanwhile, Harry arrives to help Rockingham, which inspired Dona to intervene on behalf of her pirate, but… it’s complicated.

This is yet another fantastic story by Daphne du Maurier. While the setting is in Cornwall, the oft chosen location for moody Gothic tales, this book has an entirely different tone.

At once an adventure, a romance, a literary endeavor, this book embodies a hint of styles and genres to come.

Dona has come to Cornwall for some serious soul searching, but she got the adventure of a lifetime for a woman of the aristocracy in the 18th century.

Although, she takes some enormous risks, throws caution to the wind, and finds just what she needs to quicken her monotonous life, she also must consider the cost.

It’s hard not to like Dona. She’s spirited, bold, and rebellious, thirsting for more from life, but trapped in a dull marriage, and bored with the aristocratic life she is bound to. Before all is said and done, she lives through some tense and suspenseful adventures, which on the surface is like reading a swashbuckling pirate tale, replete with romance and intrigue.

The pirate in question, is a bit of a romantic for a man of his occupation and is just the type of ‘bad boy’ Dona might go for considering her feelings for her husband.
In some ways, it sounds like this is a torrid historical romance, but I assure you this is more of a literary novel, written in a beautiful lush prose.

While the story is lightest du Maurier book I’ve read, and was actually a fun, sort of scandalous novel, there is a moral reckoning, if you will, and Dona’s character ends up going through some startling changes, coming out on the other side a very different person from the one we were first introduced to, and has its fair share of serious tones and profound insights, especially the allegorical messages, which speak to how women often feel confined by certain strictures, but who long to be as free as men, but who must often make the hard choices and sacrifices that rob them of that pleasure.
‘are you happy?"

"What is the difference?"

"Between happiness and contentment? Ah, there you have me. It is not easy to put into words. Contentment is a state of mind and body when the two work in harmony, and there is no friction. The mind is at peace, and the body also. The two are sufficient to themselves. Happiness is elusive--coming perhaps once in a life-time--and approaching ecstasy."

"No, not a continuous thing. But there are, after all, degrees of happiness.”

The ending is a bittersweet surprise , but still very fitting. 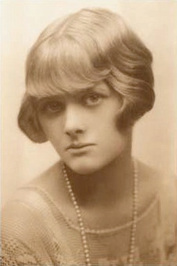 If Daphne du Maurier had written only Rebecca, she would still be one of the great shapers of popular culture and the modern imagination. Few writers have created more magical and mysterious places than Jamaica Inn and Manderley, buildings invested with a rich character that gives them a memorable life of their own.In many ways the life of Daphne du Maurier resembles a fairy tale. Born into a family with a rich artistic and historical background, the daughter of a famous actor-manager, she was indulged as a child and grew up enjoying enormous freedom from financial and parental restraint. She spent her youth sailing boats, travelling on the Continent with friends, and writing stories. A prestigious publishing house accepted her first novel when she was in her early twenties, and its publication brought her not only fame but the attentions of a handsome soldier, Major (later Lieutenant-General Sir) Frederick Browning, whom she married.Her subsequent novels became bestsellers, earning her enormous wealth and fame. While Alfred Hitchcock's film based upon her novel proceeded to make her one of the best-known authors in the world, she enjoyed the life of a fairy princess in a mansion in Cornwall called Menabilly, which served as the model for Manderley in Rebecca.Daphne du Maurier was obsessed with the past. She intensively researched the lives of Francis and Anthony Bacon, the history of Cornwall, the Regency period, and nineteenth-century France and England, Above all, however, she was obsessed with her own family history, which she chronicled in 'Gerald: a Portrait', a biography of her father; 'The du Mauriers', a study of her family which focused on her grandfather, George du Maurier, the novelist and illustrator for Punch; 'The Glassblowers', a novel based upon the lives of her du Maurier ancestors; and 'Growing Pains', an autobiography that ignores nearly 50 years of her life in favour of the joyful and more romantic period of her youth. Daphne du Maurier can best be understood in terms of her remarkable and paradoxical family, the ghosts which haunted her life and fiction.
Posted by gpangel at 1:00 AM