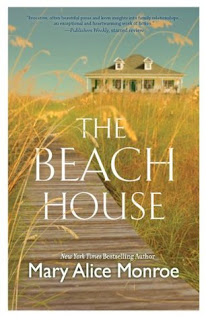 Known for her moving characters and emotional honesty, Mary Alice Monroe brings readers a beautifully rendered story that explores the fragile yet enduring bond between mothers and daughters.
Caretta Rutledge thought she'd left her Southern roots and troubled family far behind. But an unusual request from her mother�coming just as her own life is spinning out of control�has Cara heading back to the scenic Lowcountry of her childhood summers. Before long, the rhythms of the island open her heart in wonderful ways as she repairs the family beach house, becomes a bona fide "turtle lady" and renews old acquaintances long thought lost. But it is in reconnecting with her mother that she will learn life's most precious lessons�true love involves sacrifice, family is forever and the mistakes of the past can be forgiven.

The Beach House by Mary Alice Monroe
My rating: 4 of 5 stars

The Beach House by Mary Alice Monroe is a 2012 Mira publication. (Originally published in 2002)

I fell in love with Mary Alice Monroe’s ‘Lowcountry series’, and couldn’t wait to read more of her books.

I decided to start with the ‘Beach House’ series when I found out there will be a new chapter released this coming June. If I hurry, maybe I can catch up before the new book is published!


This story centers around Caretta Rutledge, a high powered, fiercely independent, career woman, who receives a phone call from her mother asking her to return home, just as her well-orchestrated life goes belly up.

Caretta had left home twenty years ago to escape a tense family life, but now that she is at loose ends, her mother’s plea stirs her emotions enough to accept the invitation to visit.

Olivia, “Lovie” Rutledge is known as the ‘turtle lady’ because of her dedication to the loggerhead turtles. Lovie has moved out of her nice home and into her beloved beach house, which holds her most treasured memories.

The resentment Cara holds in her heart must finally be faced as her mother makes a shocking revelation, and Cara’s brother, Palmer, connives, manipulates, and attempts to control every aspect of his mother’s life.

I loved the interesting information each chapter opened with, concerning the loggerhead turtles. This was so fascinating. I could understand why Lovie was so attached and how it became so important to her.

It’s also a little jarring how this book, published in 2002, seemed to capture a generation gap I found familiar.

It’s hard to believe now, but I knew people like Lovie, women of a certain era, who endured years of quiet suffering due to an overbearing and controlling spouse. But, she also allowed it to continue, never finding the courage to call the bully’s bluff.

Lovie, was of that time where men made the decisions, and everyone fell into line, or else. Lovie was ‘taken care of’, never learning how to fully stand on her own two feet, even after her husband passed away, because she then allowed her son to step into his father’s shoes and boy, was he a chip off the old block.


Cara represents the strong, independent woman who saw her mother’s life for what it was and knew she had to escape, thus breaking a chain, that may have continued for generations. Yet, at this turning point in her life, the resentments that threaten to boil over, must take a back seat, as she fights bigger battles. She also begins to wonder if maybe there is room in her life for more than her important career, something she’s never seriously considered before.

A secondary thread running through the story involved a young, unwed pregnant girl, trying to break the chain of abuse, who Lovie took in and forged a bond with. This is a very strong storyline that is equally important to the novel’s theme.

Sometimes a good southern contemporary novel is just what I need to soothe my troubled heart and mind. This book is just what the doctor ordered!

The book deals with some heavier subject matter, specifically that of abusive relationships, whether they be physical, mental, verbal or emotional, or between siblings, parent/ child, or husband/wife. Abuse comes in many forms, some being quite obvious, while others are very subtle.

But, the story is also about healing, forgiveness, and second chances, family and relationships, and redemption. It’s about strong women who face adversity with grace and fortitude, and who love, support, and lift each other up. 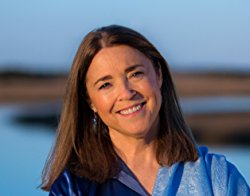 Mary Alice Monroe is known for her intimate portrayals of women's lives and keen eye to setting. Monroe brings to life the many colorful people and the compelling story layers of her home--Charleston and the the beaches of the lowcountry. Mary Alice Monroe's books have achieved several best seller lists including the New York Times, SIBA, and USA Today. Mary Alice has received numerous awards, including the 2014 SC Book Festival Award for Excellence in Writing, the 2015 SW Florida Book Festival Distinguished Author Award, 2008 South Carolina Center for the Book Award for Writing, The RT Lifetime Achievement Award, and the International Book Award for Green Fiction. She serves on the board of the South Carolina Aquarium, the Leatherback Trust, and the Charleston Volunteers for Literacy. Her children's books received several awards, including the ASPCA Henry Bergh award. Her recent novel is the final book in a trilogy set in the lowcountry: THE SUMMER GIRLS, THE SUMMER WIND, and THE SUMMER'S END. Her next novel, A LOWCOUNTRY WEDDING, continuing the popular series, will be released in May 2016. Monroe's novel, THE BEACH HOUSE, will be made into a Hallmark film starring Andie MacDowell.
Posted by gpangel at 1:00 AM