Murder in the Bowery by Victoria Thompson- Feature and Review 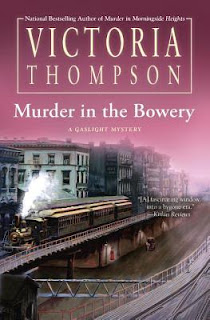 Frank Malloy s latest client is the well-dressed Will Bert. He s searching for his brother, a newsboy named Freddie, so he can share his new financial good fortune. Frank makes quick work of the case and locates Freddie, but a happy reunion between brothers is not in the cards.
When Will's name is mentioned, Freddie runs off only to be found dead a short time later. Suspicious, Frank tracks down Will who spins a tale of lust and deceit involving a young society woman, Estelle Longacre, also recently deceased. Frank can t be sure if Estelle's risky behavior and the company she kept was to blame, or if her own ruthless family had a hand in her death.
Frank will need Sarah s help to unearth the dark secrets of the wealthy Longacres and to discover if there is a connection between Estelle and Freddie s death. Together they must navigate a perilous underground web of treachery to find the truth.

Murder in the Bowery by Victoria Thompson
My rating: 4 of 5 stars

Murder in the Bowery by Victoria Thompson is a 2017 Berkley publication.

This is an interesting and absorbing installment in Victoria Thompson’s Gaslight Mystery series.

Centered around the Newsboys strike, and its connection to the orphan trains, Frank's newest case, sends him in search of a missing boy down in the Bowery neighborhood, which ends tragically, with not one murder, but two.

Frank and Sarah work to connect the dots between the two murders, one of which is a young lady from an affluent family who had ‘gone slumming’ in the Bowery and ended up involved with ‘Black Jack’, a notorious crime boss.

I enjoyed the historical details in this story involving the strike and the unbelievable practice of affluent people taking tours into crime ridden and impoverished neighborhoods, watching staged enactments of life in the ‘slums’. Incredible. I’d never heard of that before, and you know me, I had to Google it. Sure enough, it was a ‘thing’ in London, then made its way to New York. So, for the second time this week a ‘cozy’ mystery has taught me something I didn’t know.

The mystery is constructed quite well, with clever and crisp dialogue, which had to be approached carefully, and creatively, because of the sensitive matters discussed, but which also brought a bit of humor on occasion, due to Frank's obvious discomfiture. The subject matter is difficult, but handled delicately.

Crimes, whether among the rich or the poor, in higher or lower classes, out in the open or behind closed doors, touches everyone, with evil seeping into every walk of life, and this story exposes that truth effectively.

Overall, I enjoyed this latest Gaslight Mystery and seeing how married life is treating Frank and Sarah, and touching base with the other recurring characters. This is a must for fans of the series, but even those who are just joining in, who may not know the long history between Frank and Sarah, but can easily enjoy the mystery, just the same- so just jump right in- you'll be glad you did. 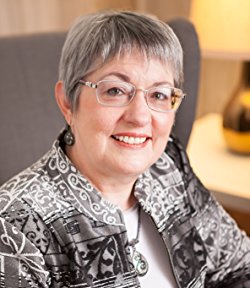