FLASHBACK FRIDAY- The Blackhouse by Peter May- Feature and Review 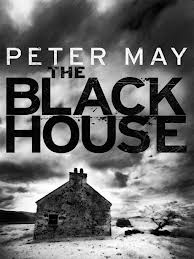 A brutal killing takes place on the Isle of Lewis, Scotland: a land of harsh beauty and inhabitants of deep-rooted faith.
A MURDER
Detective Inspector Fin Macleod is sent from Edinburgh to investigate. For Lewis-born Macleod, the case represents a journey both home and into his past.
A SECRET
Something lurks within the close-knit island community. Something sinister.
A TRAP
As Fin investigates, old skeletons begin to surface, and soon he, the hunter, becomes the hunted.

The Blackhouse by Peter May
My rating: 5 of 5 stars

The Black House by Peter May is a 2011 Quercus publication. I was provided a copy of this book by the publisher and Edelweiss in exchange for an honest review.

The Isle of Lewis is a place Fin Macleod thought he would never have to visit again. But, as fate would have it, a murder has been committed on the Isle of Lewis that bears a remarkable similarity to a murder case Fin is working on in Edinburgh. So, he is told  he must check out this latest murder to see if the crimes could be related.

Fin gets more than he ever bargained for when he returns home for the first time in many years. He encounters his first girlfriend, his best buddy, and floods of memories begin to pour out of his subconscious mind. It just so happens that the murdered man was a bully that made life miserable for Fin and his friends. Over the years the man only became an adult bully and was not a popular guy. There is no shortage of suspects, some of whom were old friends of Fin's. As the memories of childhood become more pronounced and as Fin begins to uncover numerous secrets it looks as though another murder is about to happen and Fin must race against time to prevent it.

Wow! What a well woven, brilliantly told story with an incredible climax that will leave you gasping for air. Fin is a man that is a terrible place in his life when he is assigned this case. He has just lost his only son in a terrible accident and as a result his marriage is falling apart. Being in this fragile state perhaps made it easier for all those old thoughts and feelings to come to the surface. Seeing his first love now married to his best friend when he lived on the Isle and having to interview his old school mates as a part of his job is very awkward and painful, but then a bombshell is dropped in his lap which changes Fin's perceptions of things.

The author did a wonderful job of enlightening the reader about Fin's childhood- the death of his parents , being raised by his eccentric aunt, and various experiences he lived through that might have damaged most of us severely. One major shock after another unfolds until the awful, terrible truth is finally revealed. The race to save a potential victim was incredible suspense and I could hardly bear it. I was literally riveted. I couldn't stop reading this once I started it. The murder mystery and the revelations of Fin's life and all the incredible guilt and bad luck he had was drama at it's finest. Fin's low key character held a great deal of pain and sorrow but he was always in control of himself.

However, he felt things much more deeply than anyone realizes because for years he has buried much of his life on the Isle in the back of his mind and has never addressed all the things that happened there.

After having put the reader through so many gut wrenching emotional and suspenseful moments the author somehow manages to give the reader hope for the Fin. He does an amazing thing that I felt would go a long ways toward bringing about healing and forgiveness to those who certainly deserved it after all they endured.

Very well written, with characters we could relate to and feel for. I also enjoyed reading about the traditions on “ The Rock” and the purpose of the black house. The scenery and locations set the stage for tone and atmosphere of the story and it fit perfectly. I highly recommend this book to those that enjoy psychological thrillers, suspense , and mysteries. There is some strong language and emotional topics that are difficult to read, also there are passages of detailed forensics, so be aware this book does have a dark tone. This is the first book in a trilogy and I have already placed “The Lewis Man” in my queue.

This one deserves the top honor- 5 stars!! 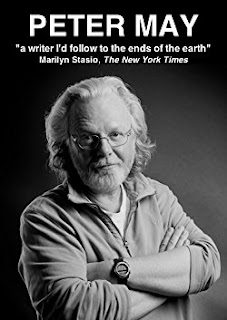 "Peter May is a writer I'd follow to the ends of the earth" New York TimesPeter May is the multi award-winning author of:- the award-winning Lewis Trilogy set in the Outer Hebrides of Scotland;- the China Thrillers, featuring Beijing detective Li Yan and American forensic pathologist Margaret Campbell;- the Enzo Files, featuring Scottish forensic scientist Enzo MacLeod, which is set in France. The sixth and final Enzo book is Cast Iron (UK January 2017, Riverrun).He has also written several standalone books:- I'll Keep You Safe (January 2018, Riverrun)- Entry Island (January 2014, Quercus UK)- Runaway (January 2015, Quercus UK)- Coffin Road (January 2016, Riverrun)He has also had a successful career as a television writer, creator, and producer.One of Scotland's most prolific television dramatists, he garnered more than 1000 credits in 15 years as scriptwriter and script editor on prime-time British television drama. He is the creator of three major television drama series and presided over two of the highest-rated serials in his homeland before quitting television to concentrate on his first love, writing novels.Born and raised in Scotland he lives in France.After being turned down by all the major UK publishers, the first of the The Lewis Trilogy - The Blackhouse - was published in France as L'Ile des Chasseurs d'Oiseaux where it was hailed as "a masterpiece" by the French national newspaper L'Humanité. His novels have a large following in France. The trilogy has won several French literature awards, including one of the world's largest adjudicated readers awards, the Prix Cezam.The Blackhouse was published in English by the award-winning Quercus (a relatively young publishing house which did not exist when the book was first presented to British publishers). It went on to become an international best seller, and was shortlisted for both Barry Award and Macavity Award when it was published in the USA.The Blackhouse won the US Barry Award for Best Mystery Novel at Bouchercon in Albany NY, in 2013.
Posted by gpangel at 2:00 AM