Promise Not to Tell by Jayne Ann Krentz- Feature and Review 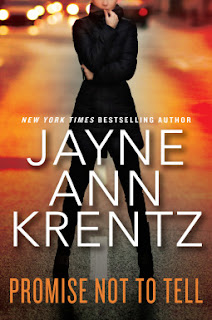 A painter of fiery, nightmarish visions throws herself into the sea—but she leaves her secrets behind . . . Seattle gallery owner Virginia Troy has spent years battling the demons that stem from her childhood time in a cult and the night a fire burned through the compound, killing her mother. And now one of her artists has taken her own life, but not before sending Virginia a last picture: a painting that makes Virginia doubt everything about the so-called suicide—and her own past.Like Virginia, private investigator Cabot Sutter was one of the children in the cult who survived that fire... and only he can help her now. As they struggle to unravel the clues in the painting, it becomes clear that someone thinks Virginia knows more than she does and that she must be stopped. Thrown into an inferno of desire and deception, Virginia and Cabot draw ever closer to the mystery of their shared memories—and the shocking fate of the one man who still wields the power to destroy everything they hold dear.

Promise Not to Tell by Jayne Ann Krentz
My rating: 4 of 5 stars

Promise Not to Tell by Jayne Ann Krentz is a 2018 Berkley publication.

I'm sensing  a little excitement with this series!!

The first book in this new series by veteran author, Jayne Ann Krentz, was okay, but I thought the series was off to a rocky start, or at least it least it felt that way for me.

I was hoping fervently that this second installment would show some improvement, and so I am happy to say I really enjoyed this one, and felt it was a much stronger effort.

Seattle comes to life in this story, adding the right touch to set the stage for a darker, more in depth look at cults, the psychological damages of trauma, amid a fast- paced race to find a killer, before he strikes again.

Virginia is convinced her friend was murdered or at the very least driven to commit suicide, and the killer could be the cult leader Virginia escaped from as a child. Knowing Cabot Sutter will understand the gravity of the situation, she hires him to flush out their arch enemy.

But, when Virginia and Cabot come face to face there is an immediate and undeniable current between them. Their relationship development is quirky, but awesome, and I quickly grew to like them both.

The subject of cults is timely, in my opinion, mainly because of the psychology behind them and how ‘leaders’ are able to convince people to join them and remain committed to them, no matter how outlandish things become.

Of course, like in most crimes, this one boils down to the basic greed and the love of money, but, there are some unexpected twists along the way, with some crazy, jarring revelations, as well.

The book also touches on the complexities of family and the importance of forgiveness, which gives the story more depth.

There was some repetitive dialogue, here and there, but the banter and chemistry between Virginia and Cabot sizzles, and the author deftly adds a very realistic look at PTSD and anxiety attacks. The plotting is tight, fast-paced, and creepy, which is a big improvement over the first installment.

One word of caution, though- while the immediate story line is wrapped up, there is a ‘to be continued’ element at the very end- so you will definitely want to be on board for the third installment, which promises to be to a real humdinger.

If you missed the first installment, it’s no biggie. It might provide a little background, but you can start with this one and be just fine.

I'm to see this new series find a it's groove! 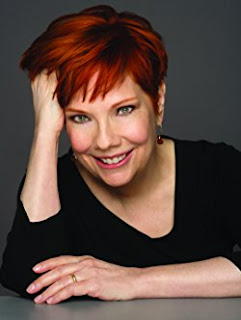 The author of over 50 New York Times bestsellers, JAYNE ANN KRENTZ writes romantic-suspense in three different worlds: Contemporary (as Jayne Ann Krentz), historical (as Amanda Quick) and futuristic (as Jayne Castle). There are over 35 million copies of her books in print.
Posted by gpangel at 1:00 AM