Letterman: The Last Giant of Late Night by Jason Zinoman- Feature and Review 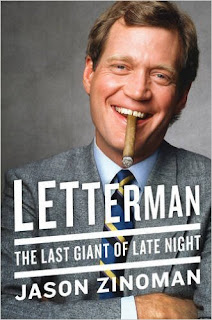 New York Times comedy critic Jason Zinoman delivers the definitive story of the life and artistic legacy of David Letterman, the greatest television talk show host of all time and the signature comedic voice of a generation.
In a career spanning more than thirty years, David Letterman redefined the modern talk show with an ironic comic style that transcended traditional television. While he remains one of the most famous stars in America, he is a remote, even reclusive, figure whose career is widely misunderstood. In Letterman, Jason Zinoman, the first comedy critic in the history of the New York Times, mixes groundbreaking reporting with unprecedented access and probing critical analysis to explain the unique entertainer’s titanic legacy. Moving from his early days in Indiana to his retirement, Zinoman goes behind the scenes of Letterman’s television career to illuminate the origins of his revolutionary comedy, its overlooked influences, and how his work intersects with and reveals his famously eccentric personality.
Zinoman argues that Letterman had three great artistic periods, each distinct and part of his evolution. As he examines key broadcasting moments—"Stupid Pet Tricks" and other captivating segments that defined Late Night with David Letterman—he illuminates Letterman’s relationship to his writers, and in particular, the show’s co-creator, Merrill Markoe, with whom Letterman shared a long professional and personal connection.
To understand popular culture today, it’s necessary to understand David Letterman. With this revealing biography, Zinoman offers a perceptive analysis of the man and the artist whose ironic voice and caustic meta-humor was critical to an entire generation of comedians and viewers—and whose singular style ushered in new tropes that have become clichés in comedy today.

Letterman: The Last Giant of Late Night by Jason Zinoman
My rating: 4 of 5 stars

Letterman: The Last Giant of Late Night by Jason Zinoman is a 2017 Harper publication.


It has been nearly three years since ‘The Late Show with David Letterman’ went off the air. For some reason, it seems a lot longer than that.

When I saw this book, it struck me that, I really didn't know all that much about him personally, save for the big sex and blackmail scandal he admitted to on the air, and his infamous stalker.

I hoped this book would give me a little insight into Letterman’s life, but I would have been happy just to read about his upbringing, and how he climbed his way up the chain to become a major late night phenomenon, because I realized I didn't even know the basics.

I was only able to tune in to ‘The Late Show’ on occasion, not because I didn’t like the show, but because I had to be up too early in the morning. When I had a DVR, I watched it more frequently, but my kids were always wanting me to watch ‘Conan’, so I was not exactly a loyal viewer. In fact, it got to the point where I only looked up the ‘The Top Ten List’ and skipped the rest.


Still, I always found Letterman to be somewhat of an enigma. He was different, offbeat, and of course the king of irony, but he also had a few rough edges and sometimes I just wasn’t quite sure how to take him. I doubt I'm the only one who was ever taken aback by his approach to his female guests, in particular.

This book explores Letterman’s various moods, his brand of comedy, as well as giving the reader insights into his personal relationships, while taking us through his career highlights- his successes and failures, all the way up to his final show.

I’m not sure if anyone can ever truly penetrate Letterman’s veneer, but it is obvious he is complex, plagued by demons and insecurities, and could be very difficult to deal with, but, if nothing else- he is original.

I didn’t come away from reading this book feeling all that much differently about Dave, one way or another. I didn’t like him more or less, after having taken this journey, but I did feel as though I might understand him better.

What I did enjoy about this book was the history of late night talk shows, watching the way Letterman was able to carve out his own niche, and the way his show evolved over the years. There are some fond memories, some great sketches, as well as some awkward moments and of course a few controversies along the way.

It was an amazing journey and Dave is certainly an interesting person, much more intense than even appears on the surface. I did enjoy reading this book, and found that, while it stuck with a chronological format for the most part, various avenues were explored as deeply as they needed to be, even if it meant going backwards or forwards in time.

The layout is organized, is easy to read and follow, and is thankfully and refreshingly unbiased, in my opinion. The author has no problem pointing out Dave’s less than flattering moments or aspects of his personality that made him seem difficult or even vulnerable at times. I loathe biographies with too much hero worship or show signs of sycophancy. This book seems like a fair assessment of Dave’s life and career, which is something I really appreciated, along with a special attention to detail and of course the obvious amount of research he put into this book.

I have recently discovered Dave has a new show coming to Netflix. I'm not sure if I'll watch, but the guest list sounds intriguing, so I may give it a try.

Overall, this an in depth look at Letterman’s life and career, is well written, fair and very insightful. 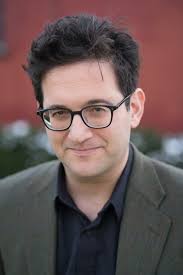 Zinoman began his career at Time Out New York, where he became the theater editor in 2001. After writing freelance stories for The New York Times, he was hired to become the On Stage and Off theater columnist in 2003.

In 2011, he published the non-fiction book Shock Value, which describes how horror films changed in the late 1960s to become more brutal, realistic, and auteur-driven, as opposed to the older, campier films based on Gothic melodrama.  In 2017, he co-hosted the television show "Theater Talk."