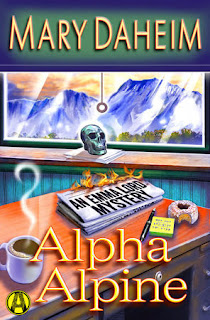 Emma Lord is back and better than ever! This time around, the amateur detective partners up with a rookie sleuth to investigate a string of murders in her beloved Alpine, Washington.
For a small town nestled in the Cascade Mountains’ foothills, picturesque Alpine provides more than enough headlines to fill the pages of editor and publisher Emma Lord’s Alpine Advocate. The Labor Day edition’s lead story features controversial timber baron Jack Blackwell’s scheme to become Skykomish county manager. But the recent strangling deaths of two young women are all anyone can talk about.
After a third body is found, Emma’s husband, Sheriff Milo Dodge, suspects there’s a serial killer in their midst. The latest victim is the sister of a dashing newcomer rumored to be working for Blackwell. “Black Jack,” as he’s known to his non-admirers, has a long-standing rivalry with Milo. To discover if there’s any connection between the mogul and the murders, Emma recruits the Advocate’s receptionist, Alison Lindahl, to do a little digging.
Still recovering from a recent breakup, Alison welcomes the distraction. But when the investigation puts the eager protégé in the line of fire, Emma worries that the cub reporter’s career will be over before it even begins.

Alpha Alpine by Mary Daheim
My rating: 4 of 5 stars

Alpha Alpine by Mary Daheim is a 2017 Alibi publication.


It feels so good to touch base with my old book friend, Emma Lord!!

Once I’d turned the final page of ‘Alpine Zen’, I felt certain the series was at a close. The ending of ‘Zen’ was almost perfect and set the stage for Emma and Milo to peacefully move forward with their life and marriage, free of some heavy personal burdens standing in their way.

But, deep down I hoped it wasn’t really the end. To my great delight I discovered Dahiem was continuing the series and wasted no time requesting this latest installment from Netgalley!!

For those following the series, the story picks up where we left off, more or less, with most of the loose ends tied up.

But, ‘Jack Black’ is back up to his old tricks, giving Milo plenty to worry about. But, the atmosphere in Alpine, turns a little dark and tense, when a young woman is found murdered and Milo suspects she might be the latest victim of a serial killer.

Emma believes there could be a connection between Jack Black and the murders, so she commissions her receptionist, Alison, to do a little sleuthing on the side. However, Emma soon begins to worry that Alison has started to enjoy playing detective a little too much, which could land her in the killer's cross hairs.

The mystery here touches on some timely issues, and seemed just a tiny bit edgier to me for some reason. But, the familiar characters we’ve come to know are here, and the banter between Emma and Milo has settled into newlywed bliss, but with an 'old married couple' slant to it. They are such a cute couple and laugh out loud funny sometimes. For those just joining us, you may find their banter a bit shocking, but once you get to know them, you will see just how crazy they are for each other.

For me, part of what makes this series so great is touching base with the characters, returning to the idyllic locale of Alpine, and spying on all the drama and mayhem. But, even if you haven’t read all the books in the series, or are starting out with this one, the crime elements are exceptional, the characters were exactly on cue, and the dialogue is sharp and witty.

Every time I read a book in this series, I wish I had the time to go back and read the series from the beginning, because it really is that good.

Fans of Emma Lord will love this one, but this one might be a great place for people who haven’t read the series to jump on board, as well. Obviously, there is some history you may feel you are missing out on, but this installment also has a ‘fresh start’ feel to it. Reading ‘Alpine Zen’ would set the stage for you a little better, but you won’t need to read all the twenty-six installments to catch up.


Overall, I enjoyed this story. It may not be the strongest chapter of the series, but after twenty-seven installments, it is still fresh, still sharp, and Emma and Milo are as delightfully cranky as ever. 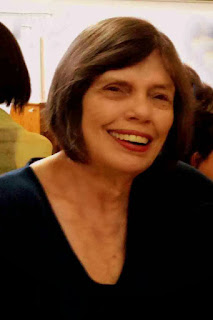 Mary Richardson Daheim has been fascinated by story-telling since early childhood. She first listened, then read, and finally began to write her own fiction when she was ten. A journalism major at the University of Washington, she was the first female editor of The Daily where she attracted national attention with her editorial stance against bigotry.
After getting her B.A., she worked in newspapers and public relations, but in her spare time she tried her hand at novels.
In 1983, Daheim’s first historical romance was published, followed by a half-dozen more before she switched genres to her original fictional love, mysteries. Just Desserts and Fowl Prey, the first books of thirty in the Bed-and-Breakfast series were released in 1991.
A year later, the Emma Lord series made its debut with The Alpine Advocate. Daheim has also written several short stories for mystery anthologies and magazines.
Married to professor emeritus and playwright David Daheim, the couple lives in Seattle and has three grown daughters. She has been an Agatha Award nominee, winner of the 2000 Pacific Northwest Writers Association Achievement Award, and her mysteries regularly make the USA Today bestseller list and the New York Times top thirty.