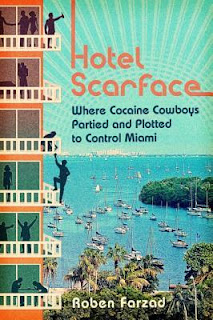 Amid the boatloads of powder and cash reigned the new kings of Miami: three waves of Cuban immigrants vying to dominate the trafficking of one of the most lucrative commodities ever known to man. But as the kilos—and bodies—began to pile up, the Mutiny became target number one for law enforcement.

Based on exclusive interviews and never-before-seen documents, Hotel Scarface is a portrait of a city high on excess and greed, an extraordinary work of investigative an unprecedented view of the rise and fall of cocaine—and the Mutiny—in Miami.

Hotel Scarface: Where Cocaine Cowboys Partied and Plotted to Control Miami by Roben Farzad
My rating: 4 of 5 stars

Hotel Scarface: Where Cocaine Cowboys Partied and Plotted to Control Miami- by Roben Farzad is a 2017 Berkley publication.

Miami Vice? Al Pacino’s Scarface? Miami in the 1980s, was all that and more. You'll have to keep reminding yourself that this is no work of fiction. While the entire country suffered an economic downturn, Miami was hustling and bustling, its economy bursting at the seams, solidifying its ‘sexiest’ reputation- all thanks to that high priced, highly addictive, white powder- Cocaine.

At the center of all the excitement, sat the Mutiny Hotel, situated on Bayshore drive. The hotel and club, was Miami’s version of ‘Casablanca’, with Burton Goldberg at the helm. This was the gathering spot for the Miami Dolphins football players, rock stars, party girls, drug smugglers and dealers and cops, alike.

Business was conducted at all hours of the day and night. The Cocaine, the money, the Dom- all flowed like water through the Mutiny in its heyday. The city was a war zone, with the highest murder rate in the nation, and the cops and judges were in the pockets of the drug lords- many of whom were household names, right alongside the celebrity clientele at the Mutiny. People from all walks of life, small time earners, and lower income Cuban immigrants, were suddenly flush with unimaginable amounts of cash, expensive cars, and all the rest.

It was a crazy time, and Mutiny Hotel became THE place to meet and do business for the notorious ‘Cocaine Cowboys.’

The book replays the drama that took place inside the storied walls of the Mutiny, featuring a large cast of characters, some of whom will sound very familiar, while others were mostly famous inside the confines of the drug industry. To help keep it all sorted, the author graciously provides a list of the major players the book is centered around.

I was not surprised by the number of celebrities that partied there, and while a few of the names mentioned will shock you, most of them won’t. Some may be moderately shaken by how many local athletes were participants, but you really shouldn’t be.

A few notorious regulars were Rick James, members of the classic rock group- The Eagles, and a few politicians, popped in and out as well- maybe a famous Kennedy? – And of course, some cast members of the wildly popular television show, 'Miami Vice’. 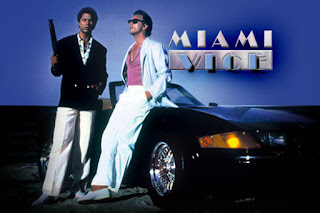 One notorious dealer even landed a couple of guest spots on the show for providing the crew with trustworthy cocaine.

While the stage is set to look like everyone was having a good time partying, drinking Dom, visiting the fantasy suites, there was a lot more going on than meets the eye. The Cuban immigrant issues that settled into the city in the 1980’s and the political climate with Cuba, in general, roiled just as intensely as it did two decades prior.

While the events that were transpiring in Miami may have helped inspire the Al Pacino movie, ‘Scarface’, the movie was mostly shot outside of Miami, and the author will explain those details, but it mainly had to do with the fear of how Cubans would be portrayed in the film.

Still, many thought they recognized themselves or others they knew in the film, and weren’t particularly offended by it.


It’s crazy to think back on it all now. Everything detailed in this book would have made for great television and movies… which it did- but it was very real, very scary, and a very dark piece of Miami’s history. It was a dangerous situation, shocking to the core, as Americans watched it all play out in real time, but now with the benefit of hindsight, it seems even more insane and hard to believe.

This book makes an excellent companion piece to the documentary ‘Cocaine Cowboys’- (the producers of the documentary even provided the prologue for this book), if you have seen it. If not, I highly recommend watching it and reading this book, in no particular order, because both will provide an incredible look back at this part of America’s history- Miami’s, in particular. FYI- the documentary is available with Neflix streaming. 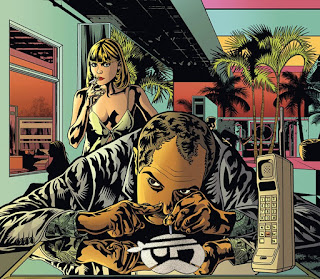 Overall, this book focuses primarily on the Mutiny Hotel and the goings on connected to it, but also delves into the city’s history, political climate, Cuba, Columbia, and the drug smuggling superstars and how it all came crashing down.

The author did a great job of organizing the material and helping to put names with faces, so to speak,
tells this riveting true crime saga in such a way, you feel like you are seeing these events unfold in front of your very eyes.

Even if you remember hearing all about Miami's drug trade on the news ad nauseam in the eighties, you didn’t get this inside version of events, believe me. You will feel the reverberations, get caught up in a bit of nostalgia, shake your head at the name dropping, and gasp in horror at the ruthless double crosses and killings. I can almost hear Jan Hammer’s Miami Vice theme song in my head as we speak.

This is an excellent true crime drama which will appeal to those of a certain age, but I highly recommend it for younger readers, too, who will get a bit of unexpected history behind the sexiest city in America. You will never look at the Miami skyline the same way again. 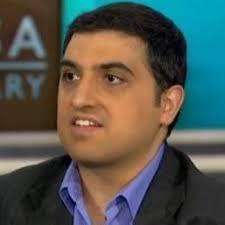 Roben Farzad hosts the weekly program Full Disclosure on NPR One and is a special correspondent on PBS NewsHour. He was previously a senior writer for Bloomberg Businessweek, where he covered Wall Street, international finance, and Latin America. Farzad is a graduate of Princeton University and Harvard Business School.