Beautiful Maids all in Row by Jennifer Harlow- Feature and Review 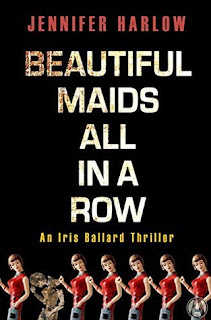 Dr. are behind her, so when Luke Hudson, her former FBI partner and onetime lover, asks for help constructing a psychological profile of an elusive serial killer who murders single mothers and dumps their bodies in the woods, Iris turns him away. She just wants to be left alone with her infomercials, her German Shepherd, and her vodka. That is, until she gets a peek at the case files.
The media him “the Woodsman.” But after Iris learns the sickening details held back from the press, and as she foot onto the scene of his latest crime, she assembles a portrait of a more complicated, enigmatic, meticulous man. Control is his motivation. He thrives on it. Soon he even tries to manipulate the investigation by contacting Iris, hoping to rattle the woman he considers an intellectual equal.
The game is on. Iris thinks she has a read on her target, enough to push his buttons, to make him lose control. But when the Woodsman gains the upper hand, Iris faces the most painful reckoning of all—with her own violent past.

Beautiful Maids All in a Row by Jennifer Harlow
My rating: 4 of 5 stars

Beautiful Maids All in a Row by Jennifer Harlow is a 2016 Alibi publication.

Iris Ballard is a shell of the woman she once was. She’s left the FBI after watching her husband get murdered right in front of her and after sustaining serious injuries of her own.

Yet, when a string of murders indicates a new serial killer, already being dubbed ‘The Woodsman’ on the loose, Iris’s old partner and best friend, Luke, tries to lure her out of her alcoholic haze to help catch the killer. This is an opportunity for Iris to finally get back to work and perhaps saving someone’s life by catching this monster, will soothe some of her guilt.

But, it's not easy climbing back into the saddle. Iris suffers from severe panic attacks and debilitating nightmares. However, she manages to rise to the occasion, hoping to prevent more deaths, but also hoping for a little redemption.

Although she must face and fight off her personal demons, her profiling skills aren't rusty in the least.

Regardless, when she is certain she’s found the right guy, she has a hard time selling everyone else on the idea. In the meantime, more lives could be lost, maybe even Iris’s.

This is my kind of thriller! Dark, atmospheric, with well drawn characters, and high octane suspense. I read this book in one sitting, it was that riveting. I really liked Iris and Luke and think they make a very good team, both professionally and personally. I hope they will return for more action, in the near future.

This series is off to a fantastic start! I can’t wait to read the next installment! 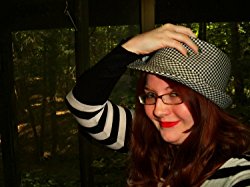 Jennifer Harlow spent her restless childhood fighting with her three brothers and scaring the heck out of herself with horror movies and books. She grew up to earn a degree at the University of put to use as a radio DJ, crisis hotline volunteer, bookseller, lab assistant, wedding coordinator, and government investigator. calls Atlanta that restless itch is ever present. In her free time she continues to scare the out of herself watching scary movies and opening her credit card bills.
Posted by gpangel at 1:00 AM