Almost Missed You by Jessica Strawser- Feature and Review 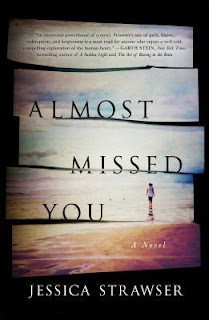 Violet and Finn were “meant to be,” said everyone, always. They ended up together the hands of fate aligning things just so. Three years into their marriage, they have a wonderful little boy, and as the three of them embark on their first vacation as a family, Violet can’t help thinking that she can’t believe her luck. Life is good.
So no one is more surprised than she when Finn leaves her at the beach—just packs up the hotel room and disappears. And takes their son with him. Violet is suddenly in her own worst nightmare, and faced with the knowledge that the man she’s shared her life with, she never really knew at all.
Caitlin and Finn have been best friends way back when, but when Finn shows up on Caitlin’s doorstep with the he’s wanted for kidnapping, demands that she them from the authorities, and threatens to reveal a secret that could destroy her own family if she doesn’t, Caitlin faces an impossible choice.
Told through of Violet, Finn and Caitlin, Almost Missed You is a powerful story of a mother’s love, a husband’s betrayal, connections that maybe should have been missed, secrets that perhaps shouldn’t have been kept, and spaces between what’s meant to be and what might have been.

Almost Missed You by Jessica Strawser
My rating: 4 of 5 stars

I almost Missed you by Jessica Strawer is a 2017 St. Martin’s Press publication.

This is the story of Violet and Finn, a couple who seemed destined to be together…

They met on a beach by chance, but that one encounter was enough to leave a lasting impression on them both.

But, for a long time they were like two ships that passed in the night, until yet another chance meeting finally cements them firmly together. But, for one of them the cement has begun to crack.

Out of the clear blue sky, Finn suddenly packs up his and Violet’s three year old son,'Bear', on what looks like a spur of the moment decision, and skips off to parts unknown, leaving everyone who knows the couple flummoxed and bewildered- including Violet and Finn’s best friend, Caitlin.

But, Caitlin soon finds herself in between the ultimate rock and a hard place when she must choose between Finn and Violet. Which one will she help? Which side will she take? Why did Finn leave his perfect marriage and why did he kidnap his son?

I had this book on hold at the library for a long time. I don’t know why there was only one digital copy of this book, but long story short, the wait time was very long. Truth be told, it had been so long since I had thought about this book, I’d forgotten the premise entirely.

As a result, I just dove into this book blindly, believing it to be a psychological thriller. Initially, the novel went right down that path. But, as time moved on, the story seemed to morph into something a bit more than that.

I was unprepared for the level of suspense that gripped me. It was so unbearable I couldn’t turn the pages fast enough. Every character has a secret and every secret carries an enormous consequence if they are exposed. Some secrets are scandalous, some are more minor, and some are incredibly heart wrenching.

This book was not exactly what I was expecting it to be, since, in my opinion, it’s not a traditional psychological thriller, or novel of suspense, which caught me completely off guard- and this is yet another one of those books that is hard to categorize. Having said that, this story blew me away, with its intensity, emotion, characterizations and dialogue. The pacing is so perfectly timed, the mere thought of putting this book down was untenable.

At the end of the day, this is a story of loss and tragedy, of ill -advised choices resulting in deeply held cataclysmic secrets that come back to roost in a most spectacular fashion. It’s a story of sacrifice, love, guilt and hope, which put me through an emotional wringer that left me nearly breathless.

It’s intense, but also has a beauty to it, with an ending that made feel as though a giant weight was lifted and that all would be well, just given a little more time, and what’s more, left me believing wholeheartedly in destiny, fate, kismet, and all the rest. Some things are just meant to be. 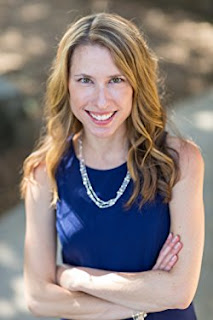 Jessica Strawser is the Editor-at-Large for Writer’s Digest magazine, North America’s leading publication for aspiring and working writers since 1920. Her debut novel, ALMOST MISSED YOU (St. Martin's Press), was a Barnes & Noble Best New Fiction Selection upon its March 2017 release, as well as a She Reads Book Club Selection and a PopSugar Best Spring Read. The book garnered accolades from such wide-ranging bestsellers as Chris Bohjalian, Adriana Trigiani, Lisa Scottoline, Jacquelyn Mitchard, and Garth Stein. Her second, NOT THAT I COULD TELL, is forthcoming from St. Martin's Press in March 2018, and a third is under contract for 2019.
Her diverse career in the publishing industry spans more than 15 years and includes stints in book editing, marketing and public relations, and freelance writing and editing. A Pittsburgh native and “Outstanding Senior” graduate of Ohio University’s E.W. Scripps School of Journalism, she counts her New York Times Modern Love essay and her Writer’s Digest cover interviews with such luminaries as Alice Walker, Anne Tyler and David Sedaris among her career highlights. She lives in Cincinnati, Ohio, with her husband and two children.
She blogs the WritersDigest.com “There Are No Rules” blog and elsewhere, tweets @jessicastrawser, enjoys connecting at Facebook.com/jessicastrawserauthor, and speaks at writing conferences and events that are kind enough to invite her.
Visit jessicastrawser.com to learn more, read some of her work and sign up for her email list to receive occasional updates and hellos.
Posted by gpangel at 1:00 AM