You Belong to Me by Colin Harrison- Feature and Review 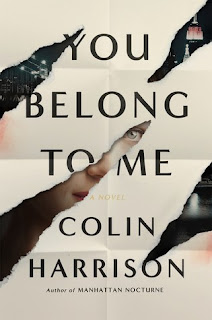 YOU BELONG TO ME . . Paul Reeves is a successful immigration lawyer, but his passion is collecting old maps of New York, tangible records of the city’s rich history in an increasingly digital world. One afternoon he attends an auction with his neighbor Jennifer Mehraz, the beautiful young wife of an Iranian financier-lawyer, but halfway through the auction a handsome man in soldier fatigues appears in the aisle and whisks Jennifer away. YOU BELONG TO ME . . A long-lost lover from Jennifer’s rural Pennsylvania past, the man sets off a series of alarming events as those close to Jennifer try to figure out who he is and how the two are connected, including her high-powered and possessive husband, whose ultimate goal is to make this embarrassing intrusion into his marriage disappear. YOU BELONG TO ME . . At the same time, one of the world’s rarest and most inaccessible maps suddenly goes on sale, but before Paul can finalize a deal, another buyer snatches it out from under Paul’s nose, sending him on a quest to find out who the mysterious buyer is and how to get the map for himself.
Eight years after his last critically acclaimed thriller, The Finder, Colin Harrison returns with You Belong to Me. Filled with compelling characters and a loving but biting satire of New York City, You Belong to Me is an exceptional novel, and Colin Harrison is at the top of his game.

You Belong to Me by Colin Harrison
My rating: 4 of 5 stars

You Belong to Me by Colin Harrison is a 2017 Sarah Crichton Books publication.

Gritty noir, a stylish thriller and homage to New York, all rolled into one book.

Paul is a successful immigration lawyer with a seriously obsessive map collecting hobby. While attending an auction with his pretty, but very married neighbor, Jennifer, she abruptly walks out when she meets a solider she obviously recognizes and is very happy to see.

Later, Paul spies the couple making love, which requires Jennifer to explain about the affair. But, Paul is not the only one who knows about her tryst.

Jennifer’s husband is an Iranian lawyer, who is more than aware of his wife’s movements while he is away from home.

In the meantime, Paul has a very valuable map sitting in the palms of his hands, but before he can close the deal, it is snatched away from him, sending him into a fevered quest to find the buyer and get his hands on that map.

The city of New York plays a prominent role in this crime thriller. The atmosphere of the city and Paul’s collection of city maps, creates an intimacy with the history and knowledge of it, making it the perfect backdrop for this dark and complex crime drama.

The characters are also stellar, very well drawn, but a bit stereotypical at times, and not necessarily the type of people you want to root for. quite large, which causes me a great deal of trouble in many cases, but I didn’t have much trouble keeping them all straight. Everyone had a specified role and they seldom veer too far off script. But, there is a lot going on here. Murder for hire, relationships and families, obsession, shady underworld characters, and even opportunism.

There is also an interesting age gap between Paul and some of whose drama he finds himself entangled in, which also provides a thought provoking take on the way age and experience taints your viewpoints. Yet everyone involved was surrounded by an aura of desperation or urgency.

This novel may be billed simply as a crime drama, but there is a pronounced noir quality to the story that greatly appealed to me. I thought the story was well written, a little sarcastic, with some very subtle dark humor hidden inside the cynicism.

I have not read Colin Harrison’s previous novels, so my expectations were no higher going into this novel than with any other, which may have worked to my advantage in this case. I was caught off guard by the tone of the novel, but pleasantly so, and was also very impressed with the style of the writing.

I absolutely love this type of and crime novel and found myself savoring it and absorbing it in a way I haven’t experienced in a long time.

I loved the details, the dialogue, the action, the pacing, and of course the rich irony that brings the show to a close.

I highly recommend this book to those who appreciate noir fiction especially, but anyone who likes a good crime thriller will enjoy this one. 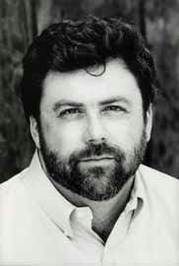 Colin Harrison is a crime novelist. He is a vice president and senior editor at Scribner.
He lives in Park Slope, Brooklyn, with his wife, the writer Kathryn Harrison, and their three children (Sarah, Walker and Julia).

His short nonfiction has appeared in The New York Times, New York Magazine, The Washington Post, The Chicago Tribune, Vogue, Salon, Worth, and other various publications.
Posted by gpangel at 1:00 AM