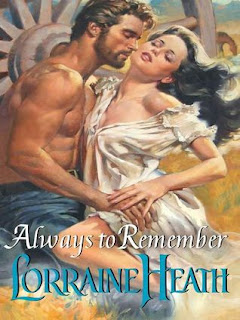 Branded a traitor and imprisoned for refusing to fight for the Confederacy, Clayton Holland returns home to Cedar Grove, only to be spurned by the townspeople, except for vengeful Meg Warner, who finds her hatred and grief transformed by love.

Always to Remember by Lorraine Heath
My rating: 5 of 5 stars

Always to Remember by Lorraine Heath a 2010 Harper publication.

This retro-romance novel was originally published in 1997 by Jove.


Set in Texas, post-civil war, the story centers around a young widow, Meg Warner and Clay Holland, a man who refused to join sides in the war or fight in it.

Meg’s husband and brothers were killed in the war, and Clay was held prisoner for being a dissenter. He should have been executed for his beliefs, but his life was spared. Returning home to his younger twin brothers, Clay tries to put his life back together, but Meg is infuriated that her husband’s best friend, has returned home alive, a yellow coward, while her husband died.

Revenge is a dish best served cold, as they say, and Meg believes she has come up with the best way to punish Clay. Since he is so good at carving stone, he must make a memorial for those men who gave their lives for what they believed in.
He must carve each name into the granite and face his own cowardice and dishonor. Meg will supervise him and watch his suffering with righteous indignation.

But, something begins to happen between Meg and Clay as they spend more time together. Could Meg have been wrong about Clay? Will she discover Kirk’s true feelings about Clay and his stand against the war? Is there some way Clay can prove to Meg he is as honorable as those who fought, and show her he is not a coward?

Back in this era of time, standing up and refusing to join in the fight was unheard of. No one understood how brave Clay was for sticking to his own convictions. That is not the way people viewed things back then. But, for Meg this is personal. She hates, hates, hates Clay for being alive while her husband, who did the right thing, in her eyes, is dead.

It’s a bitterness that has settled into her bones, giving her something to hold on to, and she does so with a vengeance. But after a time, her repetitive mantra seemed like a way to remind herself, she was supposed to despise Clay, but he made it very difficult for her.

Clay is brave, of course, because he went against the grain, spoke out about his beliefs, by thinking the war was a big mistake. He paid dearly for this stance, and even though he managed to avoid the firing squad, his life is miserable because he is a pariah.

But as he regales Meg with stories of he and Kirk’s adventures before the war, and as Meg sees him care for his brothers, and work with his hands, her heart slowly begins to soften and the man she sees now, is not who she believed him to be. In fact, he may be one of the most courageous and honorable men she knows.

This is a very good story, with a strong message woven into it, one that speaks of adhering to one’s values and beliefs, no matter what the personal cost. It’s a powerful, thought provoking tale, but also one of those strong examples of love’s power to heal, bring forgiveness, break down walls, and melt hearts.

I really wish more stories were written like this one! 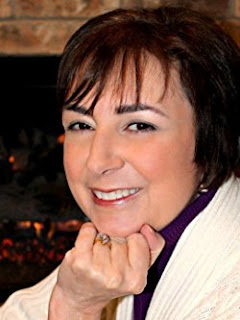 Lorraine Heath always dreamed of being a writer. After graduating from the University of Texas, she wrote training manuals, press releases for a publicist, articles, and computer code, but something was always missing. In 1990, she a romance novel and became not only hooked on the genre, but quickly realized what lacked: rebels, scoundrels, and rogues. She's been writing about them ever since, for both adult and young adult readers (as Rachel Hawthorne, Jade Parker, and with her son as J. A. London). Her work has been recognized with numerous industry awards including RWA's RITA(R), a HOLT medallion, a Romantic Times Career Achievement Award, and four Romantic Times Reviewer's Choice Awards. Her novels have appeared on bestseller lists, including USA Today and the New York Times.
Posted by gpangel at 1:00 AM