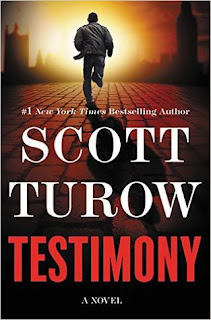 Bill ten Boom has walked out everything he thought was important to him: his career, his wife, even his country. Invited to become a prosecutor at The Hague’s International Criminal Court, it was a chance to start afresh.
But when his first case is to examine the disappearance of four hundred Roma refugees – an apparent war crime left unsolved for ten years – it’s clear this new life won’t be an easy one . .
Whispered have the perpetrators ranging from Serb paramilitaries to the U.S. Army, but there’s no hard evidence to hold either accountable, and only a single witness to say it happened at all.
To get to the truth, Boom must question the integrity of every person linked to the case – from Layton Merriwell, a disgraced US Major General, to flirtatious barrister, Esma Czarni – as it soon becomes apparent that every party has a vested interest and no qualms in steering the investigation their way . .

Testimony by Scott Turow
My rating: 4 of 5 stars

Testimony by Scott Turow is a 2017 Grand Central Publication.

Bill ten Boom, aka, 'Boom", started his life over at a time when the thought of starting over is entirely too exhausting to contemplate. After leaving his wife and his job, Bill is approached about accepting a case with The Hague’s International Criminal Court.

The case in question, is a ten year old cold case, involving the disappearance and presumed deaths, of four hundred Roma refugees during the Bosnian war. It seems like just the kind of challenge Bill has been looking for.

But, he ended up getting a lot more than he ever bargained for. Every person with knowledge or a stake in the outcome has an agenda of their own. Who can he trust, if anyone? Can he, after all these years, discover the truth of what took place in the murky Bosnian conflict?

The Bosnian war, for me, was very difficult to understand, with all the sketchy details and the inability to know what was really going on over there, I often felt confused by it all. What few details I had managed to make heads or tails of have long since left my consciousness.

But, this book brings that conflict into a sharper focus and although it is a work of fiction, the details provided are proof of a great deal of research, reading, and familiarity with the area.

The story, unlike many of the novels that made Turow famous, is nothing like a traditional legal thriller. The international courts are a whole other animal entirely, and rules are vastly different, as are the apparent dangers and intrigues.

The deaths of four hundred - including women and children, who were rounded up and then buried alive, leaving only one lone survivor, is a murder mystery of epic proportions. The suspects are plentiful- including the United States, who may have been seeking retribution due to a double cross by the Gypsies that cost American lives.

“Justice is good. I accept the value of testimony, of letting the victims be heard. But, are essential. People can’t believe in civilization without being certain that a society will organize itself to do what it can to make wrongs right. Allowing the slaughter of four hundred innocents to go unpunished demeans the lives each of us lives. It’s that simple.”

Politics, scandal, secrets, legal complexities, personal missteps, and cover-ups abound, along with plenty of action and more sweaty palm moments than you can shake a stick at.

The story moves along at a brisk enough pace, but it is not a book you can read on auto-pilot. It can be a little dense at times, and occasionally I felt lost and got a little confused, which is why I recommend taking your time with it.

trademark twists, are well timed, and effective, but it’s his amazing talent for creating rich characterizations, most notably, Goos, who was ‘Boom’s’ investigation partner, and ‘Attila’ a colorful US Army sergeant who has been told to help assist ‘Boom’, that really stands out.

There is much to contemplate in this novel, and I think it was a bold and ambitious undertaking, offering terrific insights and observations only a writer like Turow could add.

Overall, this one is quite a bit different from other novels by this author, but is every bit as smart, clever, but it is also quite a bit more challenging. Still at the end of the day, Turow delivers another outstanding, thought provoking thriller! 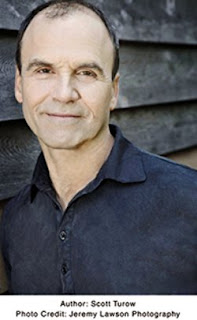 Scott Turow was born in Chicago in 1949. He graduated with high honors from Amherst College in 1970, receiving a fellowship to Stanford University Creative Writing Center which he attended from 1970 to 1972. From 1972 to 1975 Turow taught creative writing at Stanford. In 1975, he entered Harvard Law School, graduating with honors in 1978. From 1978 to 1986, he was an Assistant United States Attorney in Chicago, serving as lead prosecutor in several high-visibility federal trials investigating corruption in the Illinois judiciary. In 1995, in a major pro legal effort he won a reversal in the murder conviction of a man who had spent 11 years in prison, many of them on death row, for a crime another man confessed to.Today, he is a partner in the Chicago office of Sonnenschein, Nath & Rosenthal an international law firm, where his practice centers on white-collar criminal litigation and involves of individuals and companies in all phases of criminal matters. Turow lives outside Chicago
Posted by gpangel at 1:00 AM