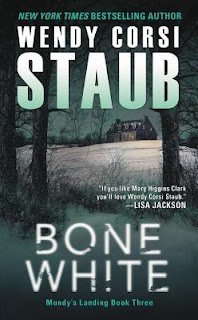 The town of Mundy’s Landing was founded on a horrifying secret, but stark white bones of the dead never lie…
“We shall never tell.” Spurred by the cryptic phrase in a -old letter, Emerson Mundy travels to her ancestral hometown to trace her past. In Mundy’s Landing, she connects with long lost relatives—and a closet full of skeletons going back centuries.
In the year since former NYPD Detective Sullivan Leary solved the historic Sleeping Beauty Murders, she—like the village itself—has made a fresh start. But someone has unearthed blood-drenched secrets in a disembodied skull, and is hacking away at the Mundy family tree, branch by branch…

Bone White by Wendy Corsi Staub
My rating: 4 of 5 stars


This is the third and final installment in the ‘Mundy’ series.

I’ve been following along with this series from the beginning and so far, it’s been a very interesting, albeit slightly quirky series, which is set in Mundy’s Landing.

Now that the “Sleeping Beauty’ murder case has been solved, and Sullivan Leary has decided to leave the big city and settle in Mundy’s Landing, things have been rather quiet. But, after Emerson Mundy’s father died, and she discovers an old letter bearing the cryptic sentence, “I’ll never tell”, she decides to travel to Mundy’s Landing to search out her past.

However, Emerson’s arrival seems to have unleashed a chain reaction of sorts. Sullivan’s old partner, Barnes, shows up needing a place to lay low, and a skull has been discovered, and turned over to forensics - so once again explosive and long buried secrets come back to haunt this seemingly quaint small town.

I really, really wanted to like this book, since I was already invested in the story, and wanted to see how everything wrapped up.

But, I confess, I  struggled with this one for a while. The pacing was slow, and the suspense level seemed to stall out. I was only mildly curious about Emerson’s fiancé, but, was moderately interested in Ora and what the lab would discover about the skull, while the only truly perplexing part of the story, for a while there, was what might be going on with Barnes.

I’m glad I stuck it out, because THAT twist, which I assure you, you will never in a million years, see coming, is worth the wait.

Once I finished the book and had a little time to think about all the various threads and how the trilogy came to a close- or at least I’m presuming this is the final chapter, I began to see the genius in the way characters from previous installments popped in and the history plays such an important role. I think maybe I had underestimated this one at first, perhaps overlooking some of the finer points and nuances, which only came to me once I had finished the entire book.

So, now that I’ve thought about it a while, this installment ended the trilogy in the best possible way. I guess it kind of grew on me.

I think this series is well worth the time for any mystery lover. It’s unique, has a perfect setting, and is very cleverly plotted, adding in rich historical backgrounds, that relates to the crimes currently under investigation, which is a very nice touch and adds another layer of mystery and substance to the story.

I recommend reading the series in order for the best enjoyment- 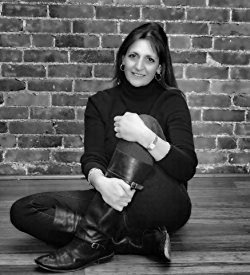 New York Times bestseller Wendy Corsi Staub is the award-winning author of more than eighty novels, best known for the single title psychological suspense novels she writes under her own name. Those novels and the women's fiction she writes under the pseudonym Wendy Markham also frequently appear on the USA Today, Amazon, Barnes and Noble, and Bookscan bestseller lists.
In 2015, Wendy will publish three new novels: THE BLACK WIDOW (on sale in February), which concludes her cyber predator suspense trilogy for HarperCollins; BLOOD RED (on sale in September), which launches Mundy’s Landing, a new psychological suspense trilogy for HarperCollins; and NINE LIVES (on sale in October), which launches Lily Dale, a new cozy mystery series for Crooked Lane.
A two-time finalist for the prestigious Simon and Schuster Mary Higgins Clark Award, she’s won the 2008 RT Award for Career Achievement in Suspense, the 2007 RWA-NYC Golden Apple Award for Lifetime Achievement, an RWA Rita award, and five WLA Washington Irving Prizes for Fiction.
She previously published a dozen adult suspense novels with Kensington Books as well as the acclaimed young adult series Lily Dale with Walker/Bloomsbury. Earlier in her career, she published in a broad range of genres under her own name and various pseudonyms, and has co-authored and ghostwritten for a number of celebrities.
Wendy grew up in a small town near Buffalo and graduated from SUNY Fredonia. She moved to Manhattan and became an editor before selling her first novel in 1992.
She now lives in the New York City suburbs with her husband and sons. A vocal and active supporter of Relay for Life, Support Connection, and the American Cancer Society, she was a 2012 Ovarian Cancer Awareness month national spokesperson for the Sandy Rollman Ovarian Cancer Foundation. As an animal rights advocate, she fosters for various rescue organizations.
Posted by gpangel at 1:00 AM