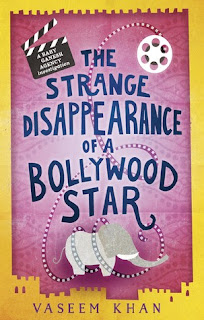 ABOUT THE BOOK:
Mumbai is a city that thrives on extravagant spectacles and larger-than-life characters.
But as Chopra is about to discover, even in the city of dreams, there is no guarantee of a happy ending. Rising star and incorrigible playboy Vikram Verma , leaving his latest film in jeopardy. Hired by Verma's formidable mother to find him, Inspector Chopra and his sidekick, baby elephant Ganesha, embark on a journey deep into the world's most flamboyant movie industry. As they uncover feuding stars, failed investments and death threats, it seems that many people have a motive for wanting Verma out of the picture. And yet, as Chopra has long suspected, in Bollywood the truth is often stranger than fiction...

The Strange Disappearance of a Bollywood Star by Vaseem Khan
My rating: 4 of 5 stars

The Strange Disappearance of a Bollywood Star by Vaseem Kahn is a 2017 Redhook/ Mullholland Books publication.


Inspector Chopra and his sidekick, baby elephant Ganesha, find themselves embroiled in the underbelly of the Bollywood film industry when the hottest heartthrob Vikram Verma mysteriously disappears. His famous mother is desperate to locate her son, but instead of going to the police, she hires Chopra.

While Chopra is navigating his way through his investigation, Chopra’s assistant, Rangwalla is investigating a case where eunuchs housed in a slum, overseen by the Queen of Mysore, are being taken to a mansion to engage in various avenues of performance arts over the weekend, then brought back home. Something smells fishy and the Queen wants to find out what is really going on.

The title of this book and that eye-popping cover caught my attention, and so on a whim, I checked it out of the library. I did not notice, until after I had finished the book, that is was the third book in a series. Oh well- it reads fine as a stand- alone and I now have a little incentive to check out the first two books of these series.

I really enjoyed the cultural details in this novel, the vibrant descriptions of Mumbai, and the charming baby elephant, Ganesha.

But, despite the obvious cultural differences, the movie industry, whether it is Hollywood or Bollywood, is still just smoke and mirrors, exactly like you’ve always heard. But, despite being a seasoned police officer and private detective, Chopra still experiences some disillusionment as he searches for Vicky.

By stark contrast, the reader is taken to the seamier side, which is a different and very sobering reality check for the reader. is heartbreaking and tragic, and while I loved the redemptive aspects, and the life lessons applied to Chopra’s case, this one made a larger impact on me.

Overall, I enjoyed this novel, which served as a nice escape into another culture, and the mild humor, plus, its use of terms and names I don’t see or hear every day provided me with a chance to learn new words and even prompted me to do a few Google searches and to add a Bollywood film to my Netflix queue, just out of curiosity. So, it was also a learning experience.

I also liked how the author added a moral to the story, which provided the characters a chance to develop and grow. While that may seem a tad cliché, it still worked as a cautionary tale.

I would be remiss if I didn’t give Ganesha at least an honorable mention. The elephant is an unusual pet to adopt, but he was hilarious and added much charm to the story.

The two mysteries included are not violently graphic, but there is an emotional tug from time to time. The language is mild as well, making this a novel that leans a little in the ‘cozy’ direction and is one nearly any mystery lover could get into and enjoy. So, on occasion, following one of my whims pays off!

I will definitely check out the first two books in the series, which I hope will keep me contented until the fourth book is released.

OTHER BOOKS IN THE SERIES: 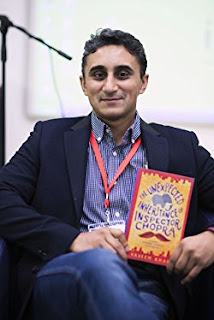 Vaseem Khan first saw an elephant lumbering down the middle of the road in 1997 when he arrived in the city of Mumbai, India to work as a management consultant. It was the most unusual sight he had ever encountered and served as the inspiration behind his Baby Ganesh series of light-hearted crime novels. was born in London in 1973, went on to gain a Bachelors degree in Accounting and Finance from the London School of Economics, before spending a decade on the subcontinent helping one of India's premier hotel groups establish a chain of five-star environmentally friendly ' around the country. He returned to the UK in 2006 and has since worked at University College London for the Department of Security and Crime Science. Elephants are third on his list of passions, first and second being great literature and cricket, not always in that order.
Posted by gpangel at 1:00 AM