A young woman returns home to care for her failing father in this fine, funny, and inescapably touching debut, from an affecting and wonderfully original new literary voice.
A few days after Christmas in a small suburb outside of L.A., pairs of a man's pants hang from the trees. The pants belong to Howard Young, a prominent history professor, recently diagnosed with Alzheimer's disease. Howard's wife, Annie, summons their daughter, Ruth. Freshly disengaged from her fiance and still broken up about it, feeling that life has not turned out quite the way she planned, thirty-year-old Ruth her job and arrives home to find her parents' situation worse than she'd realized. Her father is erratically lucid and her mother, a devoted and creative cook, the sources of memory loss in every pot and pan. But as Howard's condition intensifies, the comedy in Ruth's situation takes hold, gently transforming her grief. She throws herself into : cooking dementia-fighting meals (a feast of jellyfish!), researching supplements, anything to reignite her father's once-notable memory. And when the university finally lets Howard go, Ruth and one of her father's handsome former students take their efforts to help Howard one step too far.
Told in captivating glimpses and drawn from a deep well of insight, humor, and unexpected tenderness, Goodbye, Vitaminpilots through the loss, love, and absurdity of finding one's footing in this life.

Goodbye, Vitamin by Rachel Khong
My rating: 4 of 5 stars

Goodbye, Vitamin by Rachel Khong is a 2017 Henry Holt publication.

I wasn’t sure if I had the emotional wherewithal right now to read a novel that most assuredly would lean toward the depressing side.

But, on occasion, I simply can't resist a publishing push and with less than two hundred pages I figured I could handle whatever emotional punches were thrown my way.

Once I started reading the book, however, I found the tone to be lighter than I had anticipated, and soon found myself wrapped up in Ruth’s year long journey-

Ruth’s mother invited her to move back home after her father begins exhibiting signs of dementia. Having just broken up with her fiancé, feeling at loose ends, Ruth accepts the invitation and moves back home for a year.

Ruth’s narration is often flighty, meandering, disjointed, and disorganized, as she works through her personal heartbreak, her mother’s disappointments, and of course her father’s battle to keep his mind sharp and stay active as long as possible.

While Ruth is really hurting, she is also determined, treading into uncharted territory, discovering her parents weren’t perfect, but learning to see them in a new, more mature light, as she must now be the adult in the home. She reconnects with old friends, her brother, Linus, and comes to realize despite his foibles, she is the light of her father’s life, the apple of his eye.

The discovery of her father’s diary which detailed conversations he had with Ruth when she was a child, was charming, often hilarious and sweet, but also a little sad. These entries were my favorite part this book and I loved the way Ruth borrowed from this idea, which showed how life really does seem to come full circle.

“I like also that having a terrible day pretty much guarantees that the next day will be much, much better.”

Life and family are messy, but through all the turmoil, mistakes, and heartbreak, I think Ruth discovered a way to give back to her father some of what he gave to her, and in the process, managed to find the beginnings of her own inner peace.


Ultimately, despite the quirky writing style, or maybe because of it, I ended up enjoying this book far more than I would have thought.

While this may have been a short, quick read, it was a touching story, overall, and I’m glad I decided to give it a chance. 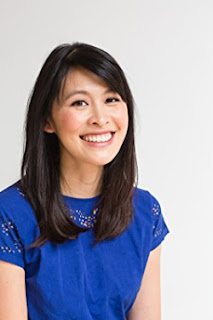 Rachel Khong grew up in Southern California, and holds degrees from Yale University and the University of Florida. From 2011 to 2016, she was the managing editor then executive editor of Lucky Peach magazine. Her fiction and nonfiction have appeared in Tin House, Joyland, American Short Fiction, The San Francisco Chronicle, The Believer, and California Sunday. She lives in San Francisco. Goodbye, Vitamin is her first novel.Website: rachelkhong.comTwitter: @rachelkhong
Posted by gpangel at 1:00 AM