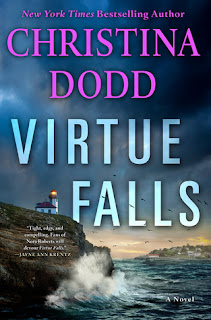 Twenty-two years ago, the beautiful Misty Banner was brutally murdered in her home in Virtue Falls, Washington.  Her daughter Elizabeth, four years old at the time of the murder, has lived her entire life believing that her father committed the crime. Now, decades, Elizabeth back Virtue Falls and hoping to find out the reasons behind the murder.  What she never expects to learn, though, is that her father was innocent all along.  In fact, the real killer is still out there.  And Misty was not his only victim...

Virtue Falls by Christina Dodd
My rating: 4 of 5 stars

Elizabeth Banner, an expert geologist, has returned to Virtue Falls, Washington to continue with her father’s work.

But, her return has sent shockwaves into the community, because when Elizabeth was four years old, her father, Charles, killed her mother, Misty, after he discovered she had been unfaithful. Riddled with Alzheimer’s and housed in a special facility now, Elizabeth has reconnected with Charles, for the first time since her mother’s death.

But, when an earthquake rocks Virtue Falls, a ghastly discovery raises new questions about Misty’s death. Could Charles be innocent?

Hearing about the deadly earthquake, former FBI agent, Garik Jacobsen, races to Virtue Falls in search of his ex-wife. Once he arrives, he realizes Elizabeth could be in danger and begins to take a closer look at Misty’s murder.

When I caught sight of this book while browsing through the Overdrive library, it occurred to me that I had not read a novel by Christina Dodd in ages. I enjoyed her historical romances years back, and read a few of her paranormal romances as well, but somewhere along the way, I lost track of her.

This book is the first in a romantic suspense series centered around Virtue Falls. After finishing this book, I was reminded of how much I enjoyed Christina Dodd’s books and I missed her!!

This book has a nice combination of suspense, mystery, action, and romance. For some reason, Elizabeth reminded me of ‘Brennan’ on the TV show, ‘Bones’. She wasn’t quite that dry, but he did have that genius quality, and was socially tone deaf, and occasionally spoke without a filter, but she was also capable of deep, heartfelt emotions. I cheered her on right from the start and was happy she found closure and of course, a happily ever after.

The mystery was very well done, with the suspense building at a nice pace, which kept me interested and engaged. This book is a traditional romantic suspense novel, but it has a very fresh approach. I enjoyed the location, the natural disasters, that created a different type of intensity, as well the occasional humor and sexy time moments that offset the darker tones.

All in all, this is a solid beginning to the series and I’m really looking forward to getting caught up with it. 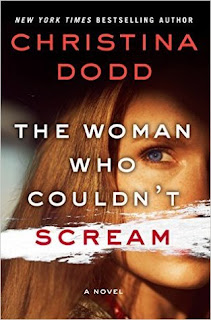 From the New York Times bestselling author comes the fourth novel of suspense taking place in Virtue Falls, Washington.Beautiful Merida is married to a wealthy older man who takes her around the world as his trophy. Merida is everything a man could want. But a traumatic accident years before her without the ability to speak. When her husband dies, she knows her chance to exact revenge on those responsible for her accident—and that vengeance begins in Virtue Falls. Reinventing herself, she slips into village life, biding her time. But someone knows exactly who she is and will use this chance to finish what was started years ago. And this time an accident for Merida will mean silencing her forever. 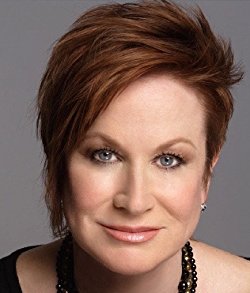 Go to Christina's home page for her, "Books by Series and In Order," page and her printable book list sorted by genre, series and in order. Join Christina's mailing list for updates! http://christinadodd.com
Coming in 2017:
—Sept. 5 THE WOMAN WHO COULDN'T SCREAM: Virtue Falls Full-length Suspense #4 in hardcover and ebook
Christina's Current Releases:
—BECAUSE I'M WATCHING: Virtue Falls Full-length Suspense #3 (2016 Amazon Best of Romance, #1 Amazon Romance of September, Kirkus starred review, Booklist starred review and Best of 2016, Library review, RT Book Reviews Top Pick.) Readers' Group Discussion Questions available on Christina Dodd's website.
—A DARK AND STORMY NIGHT: Stories of Virtue Falls, a compilation of the previously published Virtue Falls short stories with new extras from the Virtue Falls books (deleted scenes, the alternate ending of OBSESSION FALLS, Readers' Guides.)
New York Times bestseller Christina Dodd writes “Edge-of-the-seat suspense.” —(Iris Johansen) with “brilliantly etched characters, polished writing, and unexpected flashes of sharp humor that are pure Dodd.” (ALA Booklist) Her current thriller, BECAUSE I'M WATCHING, is one of BookBub's "Books to read if you enjoy Nora Roberts." BECAUSE I'M WATCHING is an Amazon Best Book of 2016, a Booklist Best Book of 2016, and a Top Pick for RT Book Reviews. THE WOMAN WHO COULDN'T SCREAM (September 5) is next in the Virtue Falls series and available for . Christina's fifty+ novels have been translated into more than twenty-five languages, won the Golden Heart and RITA Awards, and been called the year's best by Library Journal and Booklist. Much to her mother's delight, Dodd has been a clue in the Los Angeles Times crossword puzzle. And let us not forget the infamous three-armed cover…
Posted by gpangel at 1:00 AM