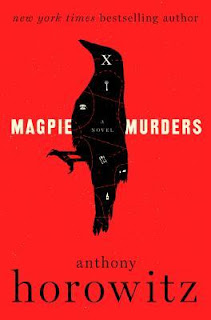 ABOUT THE BOOK:
From the New York Times bestselling author of Moriarty and Trigger Mortis, this fiendishly brilliant, riveting thriller weaves a classic whodunit worthy of Agatha Christie into a chilling, ingeniously original modern-day mystery.

When editor Susan Ryeland is given the manuscript of Alan Conway’s latest novel, she has no reason to think it will be much different from any of his others. After working with the bestselling crime writer for years, she’s intimately familiar with his detective, Atticus Pünd, who solves mysteries disturbing sleepy English villages. An homage to of classic British crime such as Agatha Christie and Dorothy Sayers, Alan’s traditional formula has proved hugely successful. So successful that Susan must continue to put up with his troubling behavior if she wants to keep her job.

Conway’s latest tale has Atticus Pünd investigating a murder at Pye Hall, a local manor house. Yes, there are dead bodies and a host of intriguing suspects, but the more Susan reads, the more she’s convinced that there is another story hidden in the pages of the manuscript: one of real-life jealousy, greed, ruthless ambition, and murder.

Masterful, clever, and relentlessly suspenseful, Magpie Murders a deviously dark take on vintage English crime fiction in which the reader becomes the detective.

Magpie Murders by Anthony Horowitz
My rating: 5 of 5 stars

The Magpie Murders by Anthony Horowitz is a 2017 Harper publication.

I love the golden age of mysteries, but, of course, I also love present -day mysteries, too. This book gave me both of those things in one novel!

How is this for a setup?

Susan Ryeland is an editor for Cloverleaf Books. She plans to spend her weekend reading the manuscript of Alan Conway’s latest Atticus Pudd mystery, entitled ‘Magpie Murders’. The reader is allowed to read along with Susan, and pretty soon I found myself enjoying an absorbing historical mystery, set in the mid-fifties, the style of which bears a strong resemblance to that of Agatha Christie. But, just as the murderer is about to be revealed, Susan makes the horrific discovery that the last few chapters of the manuscript were not included. In fact, they are missing!!

If that weren’t bad enough, she soon hears that Alan Conway is dead, after allegedly committing suicide. It is more imperative than ever that Susan finds those missing chapters, because Cloverleaf Books’ livelihood depends on it.

Her inquires soon leads her to realize ‘Magpie Murders’ holds the clue to why Alan Conway, died, and to where those the missing chapters are. To solve the true crime mystery of Alan’s death, and discover the solution to the ‘Magpie Murders’, she turns amateur detective, hoping to not only solve a crime, but hopefully, keep her publishing house afloat and save her job.

One for sorrow,
Two for joy,
Three for a girl,
Four for a boy,
Five for silver,
Six for gold,
Seven for a secret,
Never to be told.

Mysteries are my first love. I read mysteries long before I dabbled in horror, or fell in love with romance novels. I love experiencing new authors and frequently dabble in various genres and sub-genres, but I rarely ever go more than a week without reading a crime novel of some kind.

However, reading numerous crime stories for so many years has a few drawbacks too, because now I have learned the various formulas, devices, tactics and familiar plotlines, used by authors within this genre, meaning I can often puzzle out ‘whodunit’, although I may not have worked out the finer points.

This ‘occupational hazard’, if you will, keeps me on the lookout for a book or an author that can challenge me, give my brain a good workout, keep me guessing, and stun me with that ‘gotcha’ moment.

This book did all that, and kept me thoroughly entertained from start to finish, plus, I got not one, but two mysteries, which are cleverly intertwined. Okay, frame stories aren’t exactly new, but this one is genius, I tell you, genius!!


The story is chock full of details, anagrams, parallels, and crafty twists, and occasionally a bit of humor or an inside joke. It is perfect for even the most jaded mystery reader, and will certainly keep you on your toes. Despite the slightly expanded length, the story is very fast paced and hard to put down, even though I wanted to savor it as long as possible.

Needless, to say, fans of golden age mysteries will not want to miss this one, but any and all mystery lovers should give this one a try. I don’t think you will be disappointed.

GET YOUR COPY HERE:
https://www.amazon.com/Magpie-Murders-Novel-Anthony-Horowitz-ebook/dp/B01M1G8JQE/ 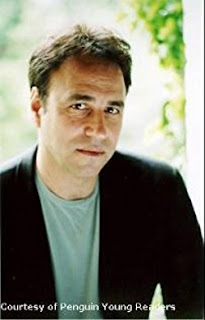 Anthony Horowitz is perhaps the busiest writer in England. He has been writing since the age of eight, and professionally since the age of twenty. He writes in a comfortable shed in his garden for up to ten hours per day. In addition to the highly successful Alex Rider books, he has also written episodes of several popular TV crime series, including Poirot, Murder in Mind, Midsomer Murders and Murder Most Horrid. He has written a television series Foyle's War, which recently aired in the United States, and he has written the libretto of a Broadway musical adapted from Dr. Seuss's book, The 5,000 Fingers of Dr. T. His film script The Gathering has just finished production. And&oh yes&there are more Alex Rider novels in the works. Anthony has also written the Diamond Brothers series.
Posted by gpangel at 1:00 AM