WELCOME TO FLASHBACK FRIDAY! THIS WEEK'S FEATURE IS: 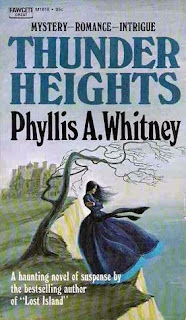 ABOUT THE BOOK:
When Camilla King's grandfather leaves her the family estate in his will, she is shocked. Before her summons to his deathbed, she had never met any of her late mother's relatives. Although the rest of the family clearly does not want her there, Camilla honors her grandfather's wish and becomes the mistress of the magnificent Thunder Heights.

But along with the grand house, Camilla has inherited a legacy of hatred and secrets. Not knowing who, if anyone, she can trust, Camilla searches for the truth about her mother's death. Soon she begins to suspect that it was no accident, but rather murder.

Thunder Heights by Phyllis A. Whitney
My rating: 4 of 5 stars

The cover of this book proclaims Phyllis A Whitney to be the " Grand Mistress of Romantic Suspense". I would have to agree with that, when she was in her prime.

Originally published in 1960,  Thunder Heights tells the story of Camilla King, who had inherited Thuder Heights from her estranged Grandfather.

However, she is forced by the terms of the will to live there with her two spinster aunts and an adopted cousin, none of whom are happy about the last minute change made in the will.

The suspense builds slowly as small incidences occur that leave Camilla unsure of whom to trust. While one of her aunts continues to fight the will, the other harbors terrible secrets. The man her grandfather had treated like a son, Ross Granger agrees to stay on to help Camilla learn about her grandfather's business. The two get off to a rocky start, but end up falling in love. However, they both have obligations that may keep them from ever having a life together.

This novel is a Gothic toned, mystery, with elements of romantic suspense, in a historical setting. The only frustrating thing, however, is that the specific time period in never mentioned, which is odd.

Nevertheless, our heroine was not some overwrought, hand wringing, melodramatic female.
She did find herself frustrated with learning a business, but was believable and strong. The suspense was killing me by the time I got to the last 50 pages or so.


Although this is an old book, if you are a fan of mysteries or romantic suspense, you won't be disappointed.

Sadly, although many older books, like this one, have been reissued in digital format, this one has not.

You may find it for sale on eBay, and by third party market sellers on Amazon. I also found a link on where you can buy a hardcover cover for a reasonable price, considering the age of the book and its rarity:

I also find books like these at garage and estate sales, second hand book stores, and paperback swap . 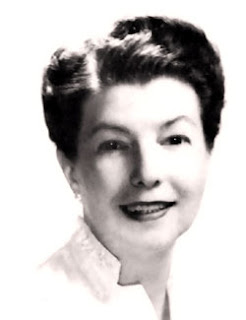 Phyllis Ayame Whitney (September 9, 1903 – February 8, 2008) was an American mystery writer. Rare for her genre, she wrote mysteries for both the juvenile and the adult markets, many of which feature exotic locations. A review in The New York Times once dubbed her "The Queen of the American Gothics".
She was born in Japan to American parents and spent her early years in Asia. Whitney wrote more than seventy novels. 1961, her book The Mystery of the Haunted Pool won an Edgar Award from the Mystery Writers of America for Best Juvenile novel, and she duplicated the honor in 1964, for The Mystery of the Hidden Hand. In 1988, the MWA gave her a Grand Master Award for lifetime achievement. Whitney died of pneumonia on February 8, 2008, aged 104.
Posted by gpangel at 1:00 AM