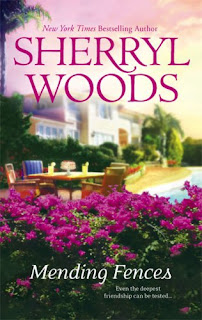 Two families--bound by friendship-- devastated by ten years Emily Dobbs and Marcie Carter have been the closest of friends. They've raised their kids together, shared joy and heartache, exchanged neighborhood gossip over tea. But when Marcie's son, now a college freshman sports star, is arrested for date rape, the bond between the families could be shattered forever.
As the Carters try to deal with the unthinkable, Emily discovers her daughter has been hiding a terrible secret--a secret that threatens the futures of both families. Recently divorced, Emily struggles to keep it all together--to support her terrified daughter, to maintain her friendship with Evan's mother and to have faith in the detective who could change all of their lives.
When things seem darkest, both she and Marcie that sometimes the first step toward a better future is mending fences with the past.

READ A SAMPLE: (and see the original classic cover)

Mending Fences by Sherryl Woods
My rating: 4 of 5 stars

Mending Fences by Sherryl Woods is a 2016 Mira publication.

This book was originally published back in 2007, but has been reissued by Mira with a new updated cover and will be available in digital format.

Neighbors, Marcie and Emily, have been very good friends for almost a decade, going through life’s ups and downs and changes while raising their children who were also very close with one another.

However, when Marcie’s son, Evan, a football star, is accused of date rape, secrets come to light that will test their friendship in ways they never could have imagined. Is there any possible way their friendship can weather the storm or are the circumstances too painful to overcome?


This story takes on a disturbing topic we grapple with every day, which is bad enough, but when your best friend’s son is the accused? What if your daughter began acting strangely leading you think she knows something about the situation she’s been keeping to herself?

This is a powerful and emotional story that dares to tackle an uncomfortable issue, but is written with a deftness that draws the reader toward the relationships and family ties that are at the heart of the matter.

There is a lot to absorb in this novel and will give the reader a great deal to think about. I was happy about the way some things worked out and a little disappointed by others, but in the end, I was proud of all the characters in the story, although a few of them will bear a tremendous burden for many years to come, I think we left them all in a good place and on the right path.

Overall, this is a very thought provoking and compelling read, recommended to those enjoy contemporary fiction or women’s fiction. 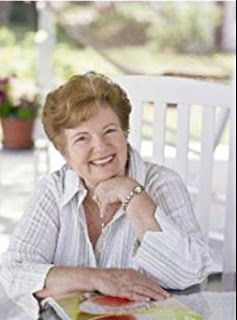 With her roots firmly planted in the South, Sherryl Woods has written many of her more than 100 books in that distinctive setting, whether her home state of Virginia, her adopted state, Florida, or her much-adored South Carolina. She's also especially partial to small towns wherever they may be. In Amazing Gracie, as in her later Trinity Harbor series, Woods creates a fictional version of the town where she spends summers on the shores of the Potomac River. "This town just lends itself to fascinating characters and a charming locale," she says.
A member of Novelists Inc., Sisters in Crime and Romance Writers of America, Sherryl divides her time between her childhood summer home overlooking the Potomac River in Colonial Beach, Virginia, and her oceanfront home with its lighthouse view, in Key Biscayne, Florida. "Wherever I am, if there's no water in sight, I get a little antsy," she says.
Sherryl also loves hearing from readers. You can join her at her blog, www.justbetweenfriendsblog.com, visit her Web site at www.sherrylwoods.com or contact her directly at Sherryl703@gmail.com.
Posted by gpangel at 1:00 AM