H.H. Holmes: The True History of the White City Devil by Adam Selzer- Feature and Review 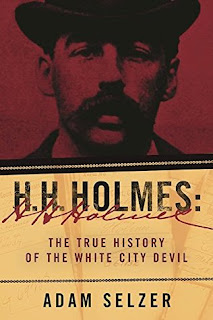 America's first and most notorious serial killer and his diabolical killing spree during the 1893 World's Fair in Chicago.
H. H. Holmes: The True History of the White City Devil is the first truly comprehensive book examining the life and career of a murderer who has become one of America’s great supervillains. It reveals not only the true how the legend evolved, taking advantage of hundreds of primary sources that have never been examined before, including legal documents, letters, articles, and records that have been buried in for more than a century.
Though Holmes has become just as famous now as he was in 1895, a deep analysis of contemporary materials makes very clear how much of the story as we know came from reporters who were nowhere near the action, a dangerously unqualified new police chief, and, not least, lies invented by Holmes himself.
Selzer has unearthed tons of stunning new data about Holmes, weaving together turn-of-the-century America, the killer’s background, and the wild cast of characters who circulated in and about the famous “castle” building. This book will be the first truly accurate account of what really happened in Holmes’s castle of horror.
Exhaustively researched and painstakingly brought to life, H. H. Holmes will be an invaluable companion to the upcoming Martin Scorsese and Leonardo DiCaprio movie about Holmes’s murder spree based on Erik Larson’s The Devil in the White City.

H. H. Holmes: The True History of the White City Devil by Adam Selzer
My rating: 4 of 5 stars

H.H. Holmes: The True Story of the White City Devil by Adam Selzer is a 2017 Skyhorse Publishing publication.


Dubbed the “First American Serial Killer’, H.H. Holmes has garnered a great deal of attention in the past, and has been the subject of documentaries and bestselling books. But, recently, the interest in Holmes has spiked.

Just this afternoon, I saw a post on social media claiming a letter had been found in a family Bible, allegedly written by Holmes, expressing remorse for his heinous crimes.


There were also recent headlines involving the suspicion that Holmes faked his own execution, prompting an exhumation of his body.

In the not so distant future, Holmes will be the subject a feature film, starring Academy award winner, Leonardo DiCaprio.


So, with the flurry of rumors and eye catching headlines keeping the notorious serial killer in the public eye, your interest in Holmes might be piqued. If you are looking for a good book that will detail the life of one of the most prolific con men in history, as well as the man who carries the debatable moniker of being America’s first serial killer, this book might be a good place to start.

While I still highly recommend on Holmes, and many of you would probably grab it first because of the bestseller status and the author’s success, I can tell you the book spends nearly as much time detailing the world fair as it does on Holmes. While it was a very good, educational, and interesting book, its focus was not solely on Holmes, whereas this book keeps Holmes as it’s one and only focus. (This author tended to disagree with , but I still think Larson has the killer’s psychology figured more accurately)

The only downfall, and I find it hard to complain about such a thing, especially in true crime, is that it is perhaps too comprehensive.

It is obvious the author has done meticulous research, and has named his sources, providing so much information, at times it got bogged down in minutiae.

The author’s opinion seems to differ from most others, in that he feels Holmes killed out of necessity, rather than any thrill he got committing of the act itself, and he disputes some other common assumptions as well. He deftly lays out his arguments with facts and lots of details, that could support his theory.

But, whether or not you agree with his assessment of Holmes’ reasons for mass murder, the sheer volume of information is mind boggling and paints a picture of Holmes that despite the author’s best efforts to convince me otherwise, only solidified my view of him. Holmes was a grifter, a con man, and a cold- blooded killer. His schemes and cons were outrageous, but so often he got away with them, far longer than he should have.

Even though I was quasi-familiar with the case, I still found myself shaking my head at the horrific way he committed his crimes and, frequency of them, not just the murders, but the con man games as well. Despite some recent claims to the contrary, the man never showed the slightest bit of remorse.

If nothing else, this book paints a very clear picture of Holmes and the author did do an amazing job of bringing him to life, which really gave me the creeps.

It took me a while to get through this one, and I didn’t just sit down and read it through cover to cover, like I do most of my books. I went through it a little at a time, but I’m glad I decided to stick it out, despite the slow going.

I would check out Larson’s version of events as well, in order to get a well -balanced look from all angles. (There are other books, but since I’ve not read them, I can’t speak to their accuracy) I’ll also leave it up to you to decide if you agree with this author’s assessment of Holmes’ psychopathy, or his alternate theories, as well, but for an enlightening view of Holmes, a complete outline of his crimes, and how he was ultimately captured, I recommend making this book your first stop. 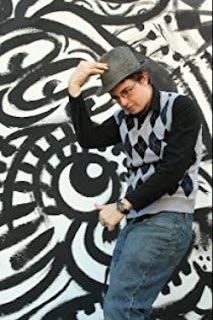 Adam Selzer is the proud coiner of the immortal phrase "you don't have to be smart to be a , but it helps." He writes humorous books (both fiction and non) for readers of all ages by day and runs ghost tours in Chicago by night. If you can find two jobs than that, take '! He is one of those people you hear about on the news who has to choose between paying off student loans and having a health care plan, and occasionally claims to be the third cowboy from the left in the famous "lost thunderbird photo." He is also credited by film historians as having inspired the film "Bedtime for Bonzo," which starred Ronald Reagan and a chimp. People who point out that said movie was released decades before he was born just don't know enough about quantum physics. Adam enjoys standing in long lines for tickets, and hopes to one day travel back in time to wait in line overnight for tickets to see a Charles Dickens reading. See him online at http://www.adamselzer.com
Posted by gpangel at 1:00 AM