What's Become of Her by Deb Caletti- Feature and Review 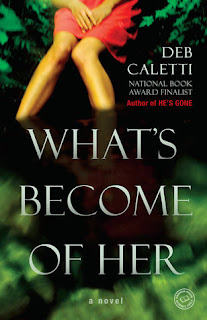 From National Book Award finalist Deb Caletti comes an emotionally riveting story of a woman falling for a man who may be hiding a dangerous secret—perfect for readers of Jodi Picoult and Kristin Hannah.
“Guilty people keep secrets.”
Isabelle Austen returns to her hometown on a small, isolated Pacific Northwest island to take over the family tourism business after the death of her mother, a disapproving parent and a hard woman to love. Feeling lost, Isabelle is also struggling with a recent divorce and wondering if she’ll ever come into her own. Then her life takes a surprising turn: The mysterious Henry North arrives Parrish Island, steps off a seaplane, and changes Isabelle’s world forever. From the beginning, their relationship is heady and intense—then Isabelle learns of Henry’s disturbing past, involving the death of a fiancée and the disappearance of a wife. Suddenly Isabelle is caught between love and suspicion, paranoia and passion, as she searches for the may not want to find—and is swept into a dangerous game she may not survive.

What's Become of Her by Deb Caletti
My rating: 4 of 5 stars

What’s Become of Her by Deb Caletti is a 2017 Bantam publication.

Once again, I’ve stumbled across an author with an impressive catalog, but for some reason has flown under my radar. But, as they say, better late than never.

This story is certainly different, both in writing style and characterizations. Immediately, the reader is clued in to the fact that our female protagonist, Isabelle, is about to experience a life altering change, and not in a good way.

Isabelle, recently divorced, has returned home to Parrish Island to take over the tourist business she inherited from her mother. Here, she meets Henry, a new resident with a sad and complicated past. The two make an instant connection, falling in love with reckless abandon. But, just as quickly, certain small warning signals begin to snowball into larger and much more disturbing alarm bells, when Isabelle begins to suspect Henry is not the man she believed him to be, and is quite possibly dangerous. Is he trustworthy? Are her suspicions warranted or is Henry being slandered? Is Henry simply moody, sad, or insecure, or is he possessive, manipulative, obsessed, abusive, or responsible for the deaths of two other women he was previously involved with?

I think it is quite easy, sitting back in the comfort and safeness of our surroundings and secure in our own relationships to pass judgement on Isabelle. She’s a woman in love, so she overlooks a few of Henry’s remarks despite her mother’s admonishments screaming in her head. Compared to her ex-husband, a man she had to drag kicking and screaming into marriage, Henry’s lack of hesitancy is heady and just what Isabelle’s bruised ego requires.

Still, I couldn’t help but exhale exasperated sighs as Isabelle continues to waffle. Her choices, her indecision, however, are exactly what makes the story so suspenseful, what had me as wrapped up in her paranoia and rationalizations, as Isabelle herself, which I can only presume is the desired effect.

The other interesting element to this story is the voice of Isabelle’s mother providing commentary to her daughter. In life, the relationship between mother and daughter was strained and distant. This situation seemed to give them a chance at posthumous forgiveness or maybe even redemption.

While we know, Isabelle has a cheering section, people watching out for her from afar, which is how we know what choice she should make, giving us a bit of an unfair advantage, it’s Isabelle who must decide her own fate. Will she do the right thing?


This is a fast-paced read, with exceptional moments of suspense, and although there are some frustrations, the story works in a, offbeat way, not only as a psychological novel, but as a cautionary tale, one that will leave you sizing up your next new encounter with a stranger, wondering what dark, twisted secrets they may be harboring. 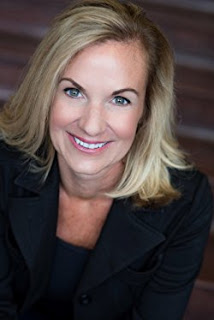 Deb Caletti is an award-winning author and National Book Award finalist. Her many books for young adults include “Stay,” “The Last Forever,” “Essential Maps the Lost,” and "Honey, ," winner of the Washington State Book award, the PNBA Best Book Award, and a finalist for the PEN USA Award. Her books for adults include “He’s Gone,” and “The Secrets She Keeps,” and her fourteenth book, "What's Become of Her," coming in 2017. She lives with her family in Seattle.
Posted by gpangel at 1:00 AM