The Wages of Sin by Kaite Welsh- Feature and Review 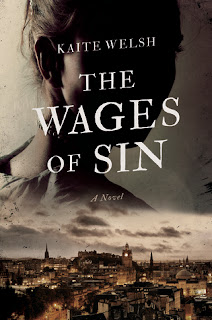 Sarah Gilchrist has fled London and a troubled past to join the University of Edinburgh's medical school in 1892, the first year it admits women. She is determined to become a doctor despite the misgivings of her family and society, but Sarah quickly finds plenty of barriers at school itself: professors who refuse to teach their new pupils, male students determined to force out their female counterparts, and—perhaps worst of all—her female peers who will do anything to avoid being associated with a fallen woman.
Desperate for a proper education, Sarah turns to one of the city’s ramshackle charitable hospitals for additional training. The St Giles’ Infirmary for Women ministers to the downtrodden and drunk, the thieves and whores with nowhere else to go. In this environment, alongside a group of smart and tough teachers, Sarah gets quite an education. But when Lucy, one of Sarah’s patients, turns up in the university dissecting room as a battered corpse, Sarah finds herself drawn into a murky underworld of bribery, brothels, and body snatchers.
Painfully aware of just how little separates her own life from that of her former patient’s, Sarah is determined to find out what happened to Lucy and bring those responsible for her death to justice. But as she searches for answers in Edinburgh’s dank alleyways, bawdy houses and fight clubs, Sarah comes closer and closer to uncovering one of Edinburgh’s most lucrative trades, and, in doing so, puts her own life at risk…
An irresistible read with a fantastic heroine, beautifully drawn setting, fascinating insights into what it was like to study medicine as a woman at that time, The Wages of Sin  a stunning debut that heralds a striking new voice in historical fiction.

The Wages of Sin by Kaite Welsh
My rating: 4 of 5 stars

The Wages of Sin by Kaite Welsh is a 2017 Pegasus publication.


I love historical mysteries, especially those set in the Victorian era, so I’m always on the lookout for a new series that fits that bill.

Thankfully, I stumbled across this little gem, which shows a great deal of promise.

Sarah Gilchrist is a character I instantly admired and respected. She’s suffered much as a woman in 1892 who has been cast out by her parents, who treat her as though she is the one who should be ashamed, and then is practically tortured before finally being allowed to join the University of Edinburgh’s medical school.

While her relatives continue their quest to marry her off, Sarah works hard at her studies, enduring abuse from male peers, but when she learns a prostitute, named Lucy, she helped treat in the hospital has been murdered, she is determined to discover what happened and why.

This is a compelling mystery with well drawn characterizations and a strong portrait of the underbelly of Scotland in a historical setting, creating a tense and often lurid atmosphere. The story spotlights the fragility of a woman's good standing, the lack of options or opportunities for someone who has fallen on hard times, blamed for crimes against their person, or who doesn't conform to society's norms.

Sarah is brave, pragmatic, and after her life experiences, a little jaded. But, she’s compassionate, smart, and due to her own circumstances, is able to avoid passing judgment, which is a kindness her patients need. The story is one that is all too familiar and one that could easily fit into a modern setting, just as easily. Yet, the mystery was surprising and I was genuinely surprised by the outcome.

This series is off to a solid start and do hope to follow Sarah on her future adventures and hope to see her character and the supporting cast again very soon!! 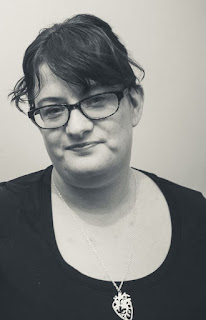 Welsh is an author, critic and journalist living in Scotland.Her novel The Wages of Sin, a feminist historical crime novel set in Victorian Edinburgh, is out in 2017 from Pegasus Books in the US in May and Headline/Tinder Press in June. It is the first novel featuring medical student, fallen woman and amateur sleuth Sarah Gilchrist, with two further books due in 2018 and 2019.Her fiction in several anthologies and she writes a regular column on LGBT issues for the Daily Telegraph as well as making frequent appearances on BBC Radio 4’s Woman’s Hour. In 2014 she was shortlisted for both the Scottish New Writers Award and the Moniack Mhor Bridge Award. She has also been shortlisted for the 2010 Cheshire Prize for Fiction and the 2010 Spectrum Award for short fiction.
Posted by gpangel at 1:00 AM